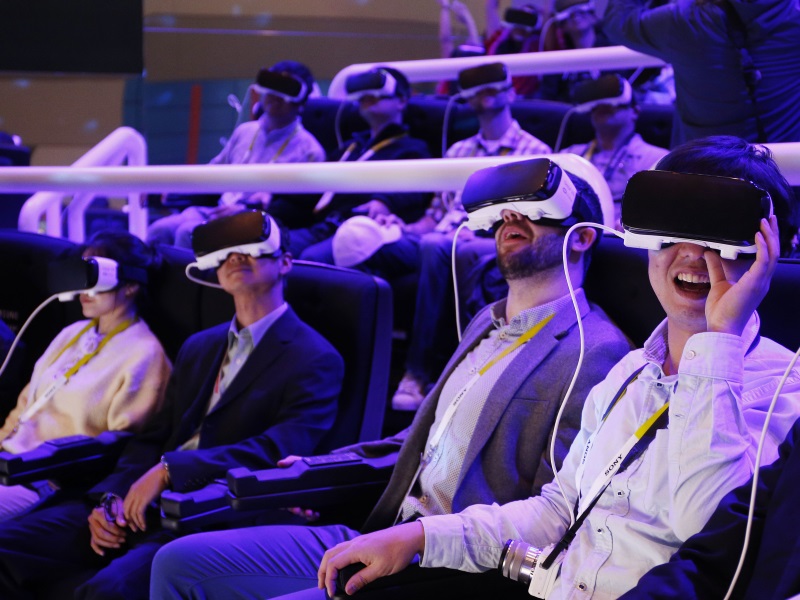 As Starcom Mediavest Group's President of Global Operations John Sheehy put it to Adweek in a frank interview, "The reason virtual reality is probably going to be good is because it's probably going to be pornography... Why not? I sat [experiencing a VR demo] swimming through an ocean today with sharks attacking me; I can only imagine what that would be for probably one of the biggest industries in Las Vegas, so why not, you know?"

Users who wear the VR headset have a first-person point of view, replacing one of the actors in the scene. For the purposes of the demo, the "participants" remained seated while other actors moved around and interacted with them. The other actors look directly into the stereo cameras as though they're looking into the viewers' eyes, and speak as if they're addressing a real person. The user can look around up to 180 degrees but remains seated. There isn't a 360-degree field of view and users can't move around through the scene to see the action from all angles - at least not yet.

In an interview with CNET, Naughty America CIO Ian Paul said his company has been working on the content since July. "We've been waiting for this moment since the dawn of technology, right? Full immersion for the adult experience, and now we're here with the Oculus and the Samsung VR and the Cardboards... We expect that at the end of 2016, ten to twenty million users will be accessing adult VR content at least once a month."

As to the making of the content, Paul told CNET "There's definitely some challenges, particularly in getting the camera angles just right for the medium, coaching the performers to take advantage of the unique nature of the medium... of course the production workflow is totally different, stitching together the files and all that's required."

He's also pragmatic about the adoption costs. "Look, people are not going to buy one of these devices just for adult [content]. They're going to buy it for gaming and adult is just going to be the icing on the cake." The company is currently producing one or two new VR videos each week and will invest more in the medium as and when demand picks up.