The 10 Coolest Crowdfunded Projects of 2014 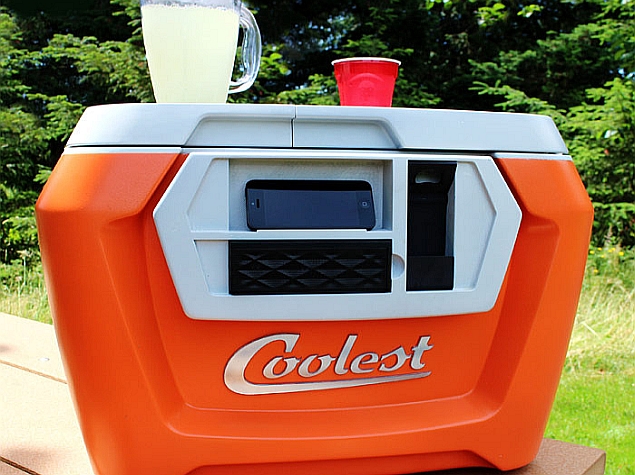 Week after week, we compulsively scour crowdsourcing sites like Kickstarter and Indiegogo to find the coolest projects that you can back - and looking back, 2014 was a really good year. We couldn't possibly have mentioned every single amazing project we saw, and it looks like there's a certain seasonal drift to ideas - at times, every idea on the sites seemed to be strange and terrible, while at other times, there was a surfeit of cool picks.

Though there's no guarantee that all of these projects will result in products that ship, here are - in our opinion - the coolest crowdsourced projects on 2014, arranged by the amount raised, starting with the biggest hit:

The Coolest Cooler will go down in history as a fascinating case study for business majors. Raising $13 million against a target of $50,000, this is one of the biggest crowdfunded projects in 2014; funnily enough though, the project first went on Kickstarter in December 2013 and failed to meet its target. So the moral here is try and try again until you've raised 13 million dollars.

The Coolest Cooler is an icebox that includes USB ports to power your phones, speakers to liven up your picnic, a blender to mix drinks, a LED lid light so you can find things in the box easily, integrated storage for cutlery including a built in cutting-board, and a bottle opener. It's no surprise that people wanted to back this project, but the total amount raised is still mind-boggling.

Musician Neil Young was the force behind the Pono Music Kickstarter - an attempt to re-envision the iPod for audiophiles. The smartphone revolution has been a force for change in many different fields, and one of those areas is audio - it's become easier than ever to carry around high quality audio on a portable device, thanks to improvements in processing power, and easy availability of storage and touchscreens.

The Micro 3D is a really cool 3D printer that is small enough to fit on a desktop. What's more, the cheapest funding tier where a reward was the Micro 3D was just $199, making this one of the most affordable options around.

The printer is supposed to ship to users in 2015, and while the print height of 4.6-inches might sound small, that's more than enough to make toys, jewellery and other small items. Comparable products cost twice as much, which is why we think that the Micro 3D is so interesting.

The Zano done is an autonomous swarming drone that can use its camera to track a person, maintain a set distance, or even be manually controlled via a smartphone. The tiny palm sized drone is packing a HD video camera, and 15 minutes of smart flight time, with removable batteries.

We loved this project back when it first launched, and still do. The coolest thing though is that the Zano team has promised that the drone will keep evolving - so there will be new capabilities like acrobatic controls which you can add to the drone simply by downloading them on the companion app.

The quantified self is becoming a very real thing now, with people regularly buying gadgets that can track their steps, their heartbeat, their blood oxygen and REM sleep. So it's no surprise that one of the Kickstarters from last year that really got a lot of attention was the Sense Sleep System.

This project includes three parts - a "monitor" device you keep in your room called the Sense, which measures the light and sound and temperature conditions. Another tracker called the Sleep Pill clips to your pillow and tracks the slightest movements in the night, while a mobile application completes the picture.

Taking the information from the two sensors, the Sense mobile app will deliver a detailed picture of your night's sleep, with a high degree of accuracy. That's the idea anyway, and clearly, a lot of people were interested enough to put their money behind it.

The Anova Precision Cooker raised over $1.8 million against a goal of $100,000, and it is essentially a system that lets you use your smartphone as a controller for a sous-vide cooker. Sous-vide is a pretty old cooking technique that's going through a bit of a renaissance right now, but it's a little difficult to do yourself at home. The Avona sous-vide machine itself has a touchscreen that looks easy to use, but you can also tweak the settings, or pull up settings based on what you're cooking, using a companion app on your phone.

There has been a lot of interest in 3D printing this year, but the coolest project we've seen might well be the Flux All-In-One 3D Printer. That's because this printer has a modular design, and it claims to allow users to quickly and easily swap out parts.

This means that you can switch from an ABS plastic extruder making toys, to a laser engraver that can be used to carve a design into a wooden board. Future updates would include parts such as a chocolate extruder, for 3D printed desserts..

These tiny Bluetooth headsets are going to be a growing category in 2015 as more people want the convenience of wireless accessories, without huge pieces of plastic being strapped to their faces. What's really cool about the Earin is that it is a wireless Bluetooth stereo headset, and each ear is a tiny bud alone - the experience will be like wearing small wired earphones, just minus the wires.

The catch is that these are only for music, so if you want a full headset, you're still going to have to use something like the Motorola Hint - the general design concept of a small earbud coupled with a carrying case that doubles up as a charge station is a compelling one though, and that's why we think this is so interesting.

We're pretty excited about Virtual Reality in 2015, and 2014 was the year where most of the coolest new devices in this category were announced. Even "old" ideas like the Oculus Rift saw new prototypes, and that company has already made some great progress in VR.

The Avegnant Glyph Kickstarter came out at a time when interest in VR was at an all-time high, and now as the dust settles, VR seems to be well on the way to becoming real. Samsung has a hat in the ring and while the Oculus and Sony's Project Morpheus haven't announced release dates yet, the Gear VR means that commercial consumer-grade VR is finally picking up. The Glyph is another interesting product in the category; though its focus is less on VR and more on reinventing how HMD's work, as it will project the image by firing a laser into your eye!

Between 3D printing and VR, it's hard to say which upcoming new technology looks more like the work of science fiction, but this is the year where we're seeing both come to life. The LIX 3D "pen" is a particularly interesting example, since it is essentially a hand held 3D printer, that extrudes plastic, letting you "draw" in thin air.

The results don't look particularly polished - they're more like a child's Play-Doh designs - but when you see it in action, you know you're looking at one of the coolest things in the world.

Did you back any projects on Kickstarter, Indiegogo or other crowdfunding sites? Which of these projects do you think was the coolest? Let us know via the comments.