The Pudding, a digital culture site, has launched an AI bot that judges your bad taste in music on Spotify. 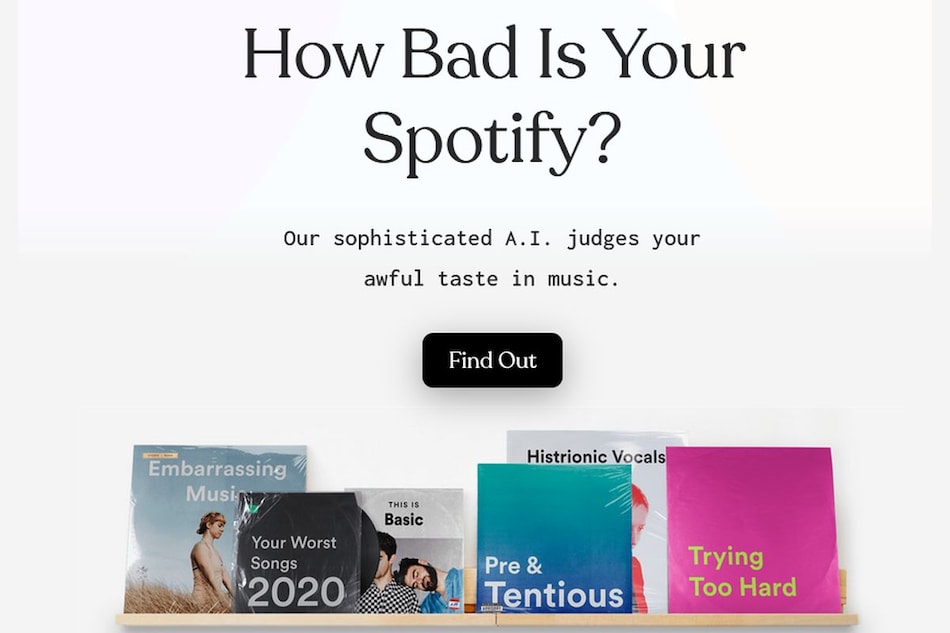 The Pudding's Spotify bot will shine a spotlight on your musical tastes and give a thorough roasting. Have you ever had that moment when you are listening to some terrible music and suddenly your earphones unplug for some reason and you are left embarrassed to death as the horrible music blares out through your phone and everyone looks at you and judges you? You might not have felt that feeling lately given that we've been stuck at home for almost a year now, and almost all interactions that we've had were virtual.

The Pudding, a digital culture site, has launched an AI bot that specifically judges your bad taste in music. The AI bot not only ruthlessly ridicules you for your miserable music taste, but makes sure that you keep laughing at yourself while it majestically derides us. Even if you consider yourself an elite listener of music, the AI will make sure that it will smash all the 'fine-music-listener-persona' that you've built in your head. In its essence and character, the bot is a feather on the crown that the rollercoaster-ride of a year that 2020 has been.

To get the bot to roll its eyes at you for your pathetic music taste, you can go to Judge My Spotify. The bot which is ‘trained to evaluate your music taste' will greet you and request you to log into your Spotify account.

Mike Lacher, one of the brains behind the witty bot says,”We wanted to make something similar to Spotify Wrapped, but instead of celebrating your music, it would insult it. For us personally, we knew that the stuff we stream privately is often embarrassing, so we thought it would be funny to make a bot that would look through all that stuff and judge you. We wanted it to feel like a judgemental friend, or a snobby record store clerk.”

The bot explains that it has "been trained on a corpus of over two million indicators of objectively good music, including Pitchfork reviews, record store recommendations, and subreddits you've never heard of," as its qualification to judge your music taste.

Being a long-time user of Spotify, I was excited to try out the bot as soon as I heard about it. I consider myself as someone with quite a decent taste in music, although I do have some guilty pleasures. I was eager to know what the AI could possibly scorn at me for, as my frequent playlists were all 60s rock music - and hey, I don't make the rules but nobody mocks at 60s rock music.

Once you log in, the bot wastes no more time on exchanging pleasantries and heads straight to roasting us.

At one particular instant of roasting, the bot even asks us if we are 'okay'?

Here we can either answer 'yeah why' or 'not really'.

But if you are to choose the 'not really' option, the bot immediately softens up.

The "How Bad Is Your Spotify" bot may be mean but at least it asked if I was okay and didn't judge me for my obsession with @amazingdevilmus which is more than I can say for some people pic.twitter.com/hmVhNO88eR

After a few more hilarious humiliations, the bot gives us its final judgement. Everyone gets assigned to the kind of bad their Spotify is. We also get to see what percentage of 'basic' we are.

The judge your spotify thing is fantastic ???? pic.twitter.com/5dQ3OEAVI8

I couldn't stop laughing about this. I felt so judged by this hoe.

This website will use your Spotify to judge you and it is fantastic.https://t.co/pOwaNngqtJ pic.twitter.com/x4gV8kDUyz

If you still haven't, head over straight to the ‘How Bad Is Your Spotify' page and get yourself judged by one sweet, 'sophisticated AI'. But after you've been thoroughly roasted… don't feel too bad, because Lacher admitted that the whole thing is a bit of a gag. “Spoiler alert, the bot thinks everything is bad,” he said. “There's no way to have it think your music is good. We look at your listening history for your most-listened-to artists, tracks, albums, and genres, and then try to give you the best insults from a large corpus of them. No matter your taste, the bot hates it."