Shifting Politics of Net Neutrality Debate Ahead of FCC Vote 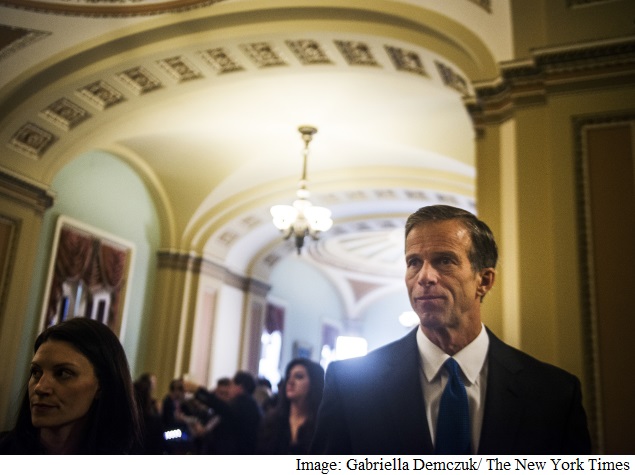 In November, when President Barack Obama proposed strict rules to prevent broadband companies from blocking or intentionally slowing down the Web, Republicans pounced on what they called yet another heavy-handed liberal proposal. Sen. Ted Cruz of Texas pronounced the regulations "Obamacare for the Internet."

But what was, on the surface, a simple fight over big government versus small has put Republicans in the awkward position of aligning themselves with the cable giants, among the most maligned industries in the country, against the sad Netflix viewer waiting for "House of Cards" to break through its "buffering" vortex.

In the intervening weeks, politics on the net neutrality issue have shifted so much that House and Senate Republicans are circulating legislation that would ostensibly do exactly what the president wants: ban the blocking or "throttling" of Web traffic and prohibit the creation of paid "fast lanes" for Internet content providers willing to pay for faster delivery.

But it would also prohibit the Federal Communications Commission from issuing regulations to achieve those goals - the approach favored by the Obama administration and most Internet companies.

"The ground has shifted," said Chip Pickering, a former Republican House member now lobbying for small Internet service providers who support net neutrality regulations. "Republicans lumped net neutrality in with the carbon tax and Obamacare: 'He's taking over everything and now he wants to take over the Internet.' But it was a reactive, visceral response without a real understanding."

The arcane fight over net neutrality is about to burst into the open. House and Senate panels will hold hearings Wednesday pitting the heads of the cable television and wireless lobbies against Amazon and scrappy little Etsy, an online craft market. Sen. John Thune, R-S.D., who heads the commerce committee, hopes to have legislation ready the following week - ahead of the FCC's February meeting and what Internet activists are calling "the most important FCC vote of our lifetime."

"By turning the FCC away from a heavy-handed and messy approach to regulating the Internet, this draft protects both consumers who rely on Internet services and innovators who create jobs," Thune said about his legislation in a statement.

Internet companies and online activists say Republicans have adopted the language of the net neutrality movement, even as they carry the water of the cable companies, and they are preparing for battle. Some of those same players blackened their website, appealed to their customers and ultimately torpedoed bipartisan legislation in 2012 to combat online piracy in a major new economy-old economy fight.

Once again, an Internet regulatory showdown might be guided as much by grass-roots guerrilla tactics as the lobbying of Comcast and Verizon. The FCC has received 4 million comments on net neutrality - overwhelmingly in favor - ahead of its Feb. 26 decision day, second only to Janet Jackson's "wardrobe malfunction" at the Super Bowl in 2004.

After Cruz called net neutrality "the biggest regulatory threat to the Internet" on his Facebook page, the entry was flooded with comments like "I'm a Republican, and I support Sen. Cruz, and I'm a big admirer, but on this, he's wrong, very wrong," or "I'm a Ted Cruz fan, but as a small website owner, it seems to me net neutrality is a good thing," and "Senator Cruz, you are risking alienating a huge part of your base by such a pro-monopoly stance. The battle for net neutrality is a conservative cause."

Internet activists, backed by many Internet companies, like Reddit, Vimeo, Netflix and Tumblr, staged an Internet slowdown in September to draw attention to their cause, much as online stunts by Wikipedia and Google in early 2012 stunned the powerful motion picture and music industries and helped bring down the Stop Online Piracy Act.

This time, the fight might be even more palpable to consumers. Companies like Netflix say they need protection against behemoths like Comcast, Verizon, AT&T and Time Warner, which could use their power over cable and fiber-optic lines to slow consumer access to websites that offer competing content or fail to pay for fast service.

Between summer 2013 and early 2014, Comcast customers found their access to Netflix getting progressively slower as Netflix's streaming grew more popular and Comcast refused to upgrade its capacity, Netflix officials say. Then last February, Netflix did what Comcast wanted: It paid a still-undisclosed sum and the problem went away.

"The reason I think Netflix has captured people's attention is what happened to our service was real, it was bad, and it was recent," said Corie Wright, director of global public policy at Netflix. "They think of that buffering signal and the video that didn't start and the problems that net neutrality is supposed to solve were literally brought home."

Comcast officials declined to comment, citing FCC deliberations, not only on net neutrality regulations but also on the company's merger with NBCUniversal. But in a filing to the FCC last month, the company said reclassifying wireless and wired broadband service as a regulated public utility would harm investment and diminish capacity. If a broadband company throttled access to popular sites like Netflix, the company contends, customers would simply go to a competitor.

In that sense, broadband providers argue, net neutrality is a solution in search of a problem.

"The public discourse on open Internet issues has now reached a fever pitch," Comcast wrote. "Emotion and hyperbole are substituting for fact."

Verizon, in its company public policy blog, was even more blunt, blaming Netflix for the slow service Verizon customers were complaining about. Despite "an unprecedented amount of data" to send, the video streaming company was using cut-rate providers - "(perhaps to cut costs and improve its profitability)" - to carry content to the big broadband companies, Verizon said. "Netflix knew better. Netflix is responsible," Verizon said.

Internet activists say the "solution in search of a problem" argument is growing thin, after the Netflix episode and other issues. And the coalition appears to be girding for a fight - and hoping to catch politicians on the wrong side of what one cable lobbyist called "religion" more than policy discourse.

"The libertarian conservative base is pretty astute at recognizing crony capitalism and understand how campaign finance and corporate influence affects policy," said David Segal, executive director of Demand Progress, a net neutrality advocacy group. "And this is a pretty transparent moment for all that."