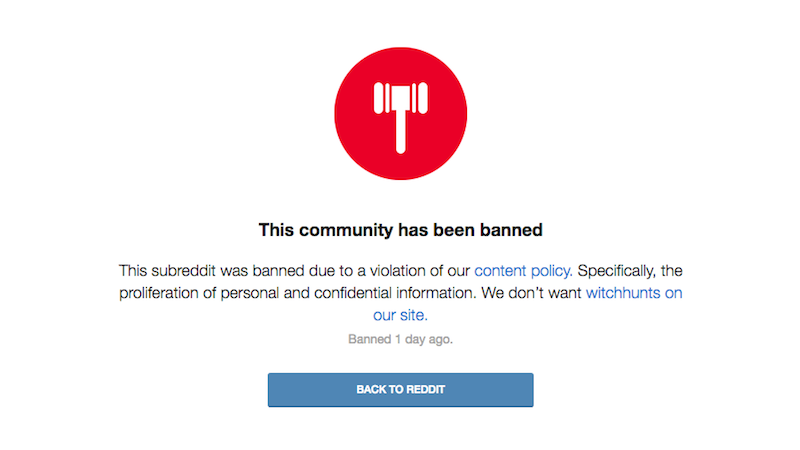 Citing its policy against posting the personal information of others, Reddit has banned the "Pizzagate" conspiracy board from the site. Pizzagate, a persistent and popular conspiracy theory that combines the Clinton diaspora with accusations of a secret pedophile ring, has been a steady force in the enclaves of the pro-Donald Trump Internet for the past few weeks.

It has also led to some very real harassment of the people caught up in the theory, including the owner of the Comet Ping Pong pizzeria in the District, James Alefantis. Alefantis has received hundreds of death threats over the past couple of weeks, he told the New York Times this week, after Pizzagate enthusiasts decided that his restaurant was the secret headquarters of a child sex-trafficking ring run by Hillary Clinton and members of her inner circle.

None of the wildly accusatory claims are true. Alefantis told the Times that he asked Twitter, Reddit, Facebook, YouTube and the FBI to help him stop the spread of the conspiracy theory, which uses photos of his own kids as "evidence."

For some parts of the Internet, the leak of stolen emails from Clinton campaign chairman John Podesta provided an opportunity to scour for evidence of wrongdoing. As the Washington City Paper noted, that included a huge search for stronger ties between convicted sex offender Jeffrey Epstein and the Clintons. What those sleuths found instead were lots of references to pizza, which then led to speculation that the emails about pizza must be code for something bad. The theory made its way onto r/The_Donald, the huge, Trump-supporting subreddit, until the hunt spawned its own subreddit, r/Pizzagate, which quickly attracted a dedicated team of Internet investigators.

"Pizzagate" has yet to produce any actual evidence for its extremely weighty and life-ruining accusations, but every debunking of its claims - including the one in the Times - has only convinced its believers that they must be right, and that the circle of pedophiles and sympathizers trying to cover up their findings must be even bigger and more powerful than they imagined.

The same goes for Reddit's ban. In a post on r/The_Donald (the big subreddit dedicated to supporting Donald Trump) after the Reddit ban, one former moderator of the board dedicated to unraveling Pizzagate said that the "entire mod team and everyone else is tightening up our opsec and putting on our battle-armor."

"We have all made life insurance videos. We have all vowed to continue this fight. You have only increased our number. This morning we were numerous, tonight we are legion," they wrote, promising that the hunt would soon return to the web with a vengeance. For now, they've relocated to Voat, a popular Reddit alternative created in protest of Reddit's enforcement of its rules.

Reddit does not generally ban conspiracy theories, or the boards dedicated to them, from their site just for existing. What crossed the line with Pizzagate was the repeated posting of private information on the boards from sleuths who believed they were identifying pedophiles or those working to help them. An r/The_Donald post from a moderator asked the board to immediately report any doxxing or personal information posted there in the wake of Pizzagate's demise, to help spare their community from the same fate.