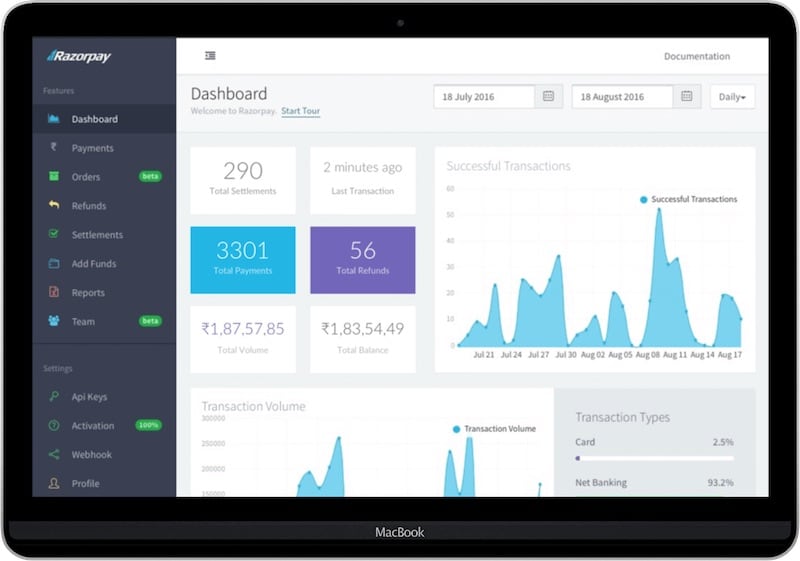 When you buy anything online, the site or app that you're using hands you over to its payment gateway, which then carries out the transaction. There are a number of successful gateways in India right now - CCAvenue, one of the oldest such businesses in India; Citrus Pay, which was recently acquired by PayU (also a payment gateway); Instamojo; and Razorpay are among some of the best known.

They've all been growing steadily as more and more people switch to digital payments, and thanks to the demonetisation initiative in November, these companies all witnessed huge growth as well. Gadgets 360 caught up with Harshil Mathur, the CEO and co-founder of Razorpay, and we talked about how the company has grown, and what the payments industry is like today.

Razorpay has some high profile customers, such as Zomato, ClearTax, and Nestaway, among others, and Mathur says that a focus on product excellence drives the company. "Design and UX forms a big part of product excellence. If the experience is easy then customers will complete transactions," he says. "If not they will drop off."

Improved reliability
From a user experience standpoint, Razorpay’s focus is on two things — success rate and time taken to complete payments. "Success rate is the number of transactions that are successful. Our success rate has grown by seven to eight percent and in the last few months, the time to completion has gone down by 40 percent," Mathur says.

The reliability of payment gateways in India wasn’t great a few years ago, but Mathur feels the situation has improved a lot. "After demonetisation, a lot of banks revamped their online payment infrastructure," he says.

"For top banks at least, payment gateways have significantly improved," he adds, hinting that many companies started taking online payments seriously only recently.

Demonetisation and the UPI
Of course, Razorpay also benefited from demonetisation, just like every other online payments company. In the past one year it has grown from serving 10,000 merchants to 35,000, and it has seen a 25x growth in payment volumes - most of which happened after the demonetisation announcement, according to Razorpay.

Another impact of demonetisation was the introduction of the Unified Payments Interface (UPI), a payment protocol that the government has been promoting heavily. Mathur is full of praise for the UPI, and says that the overall experience of UPI transactions is much faster than the alternatives. Integrating it as a payments option would only lead to more transactions for gateways.

However, he expressed concern that certain banks’ poor UPI apps could be a hurdle people will face while using that payment method.

However, he added Razorpay has had a good experience while trying to work with banks. Mathur says banks don’t see fintech companies as a threat anymore.

"Banks are seeing fintech as a partner, not a threat. They are very open to product feedback," he says, adding that Razorpay has been constantly monitoring payment success rates of various UPI apps and reporting it back to the bank. "They can then go ahead and fix it," he added."That is something we constantly work on fixing."

Designing for success
But beyond that, Razorpay has worked on optimising its gateway for slow and flaky networks. "In a country like India even with 4G coming in most transactions happen on flaky connections," says Mathur.

To speed up transactions Razorpay has also implemented features such as auto OTP on Android (which automatically enters the one-time password you get via text message) and tried to ensure that people don’t have to type on non-mobile optimised pages. "Lot of banks have mobile optimised pages and we serve them when needed," says Mathur. It also allows you to use saved credit/ debit card details across Razorpay merchants.

The next step for Razorpay is to diversify. "Verticals such as education, government, and utilities are where we don’t have strong presence," he says. "The organisation is aligned very strongly towards B2B and there is a lot we can do to improve that. We are not looking at entering the B2C sector at all."