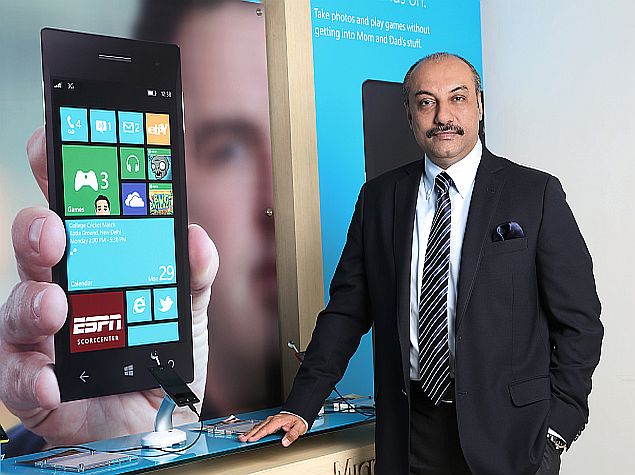 Microsoft in partnership with the Rotary International District 3010 announced this week that it will be providing the Microsoft IT Academy to 150 schools in Delhi. The IT Academy includes online educational content, course materials and learning tools. The goal of the project is to improve IT literacy in India, according to Karan Bajwa, Managing Director, Microsoft India.

Today, while mobile penetration and Internet access is skyrocketing in the country, there is still a shortage of adequately trained students in the country, and Bajwa says that 50 percent of the jobs available already require technical skills, a number he believes is only going to rise quickly.

NDTV Gadgets: Can you tell me a little about why this project is important, and the impact you believe it will have?
Karan Bajwa: IT literacy is one of the biggest issues, and the work on this front has to go beyond just providing a computer. You have to start with the faculty, and then move to the students. Otherwise you have a great plan with great intentions, but the students don't learn anything because their teachers were not adequately prepared. You need to plan every aspect, and you need to provide certification so that there is a way of measuring what impact you are having.

Obviously these projects are important for corporate outreach, but why IT literacy specifically?
It's not just CSR, or outreach for us, but rather, something that we strongly believe in. We have multiple educational programs, in Delhi and around India, with Project Shiksha, which started in 2008 being the biggest. It's not just IT literacy either. All told, over the last ten years, Microsoft has invested around $100 million in educational projects in India, and this is something that we're proud of and will continue.

Aside from the quantifiable measures, there's the fact that so many people have gained value, and gotten jobs only because of the training we have been able to provide, and we're highly proud of that fact. These initiatives matter because they make a real impact in helping people find jobs.

Another program, Project Jyoti, has touched over half a million people so far, provided education and certification, and 70 percent of those people found jobs, which is a quantifiable measure of the impact these projects are having.

Aside from the MS programmes, what else do you see as positive developments in spreading IT literacy in India?
Aside from our own initiatives, we've been happy to see that the government has also taken note of the importance of IT literacy, and today, we see a growing India which has not been touched fully yet. As more people are connected, you're going to see a knock on effect, and the policy environment is also shaping up. The BJP manifesto talked about raising education spending from four percent to six percent, and we're seeing innovations like digital libraries being examined now, so we are very hopeful.

Going forward, we're told that smartphones will lead the numbers for Internet connectivity in India. What role do you see for Lumia in this?
Whether you use a mobile or a tablet or a PC should not be important - that's just the form factor that each user will have a different preference for. Now, for example, you're seeing a lot of interest in tablets. That's why our goal is to make the back-end of these kinds of initiatives platform agnostic, because our goal is to use digitisation to enable e-literacy, through e-books, online-certification and online materials. Mobile is definitely a part of that, and we're very happy that Windows Phone is now the second most popular platform amongst smartphones, but it's an ongoing journey.

You say that interest in tablets is rising, but according to a recent report, tablet sales growth dropped from 424 percent to 76 percent. How do you see tablets bouncing back from this?
That's absolutely correct, but that is because the market is taking its own shape now. At first, there was a lot of excitement because it was something new. Now, it's going to rise again, as people start to find the right use cases for tablets for them. What will I use it for? What will a student do with it, what will a house wife, what will a teacher? There's a growing app economy and you're going to see more answers to the question of what this is useful for, and more adoption as a result.

Also, another thing to consider is that the 424 percent growth was over a non-existent base, in absolute terms the growth hasn't really changed that much.

When you look at the state of education in India, at infrastructure and teaching, what do you see as the biggest challenges in the way to widespread IT literacy?
I prefer to see this as opportunities, and right now I think the big opportunity lies in the policy environment. We need the government to take the lead in bringing technical education to the country, and I think that there needs to be more focus on the faculty. You need to certify the faculty before you take it to the students. Broadband is another area where a lot of development lies ahead and it will open the doors for e-learning.

E-Learning is something that has supposedly been around the corner for the last ten years, and today again we're talking about it as the next thing... Why is it always just around the corner?
In India, when you talk of change, 10 years is a very short time. In 10 years, we've already seen so much change. Pagers came, and blinked out, cell phones came and became smart phones. Things move fast when the clear use case evolves.

Now e-learning is dependent on the availability of the right platform. I think that the smart phones, and the growing Internet access in India, are steps in the right direction, and we've definitely come a long way from 10 years ago, but there's a very long way to go still. I think that there is some evolution that needs to occur, and we're always working to make the offering better, and in terms of the kind of impact this can have on the country, we have to take e-learning seriously.