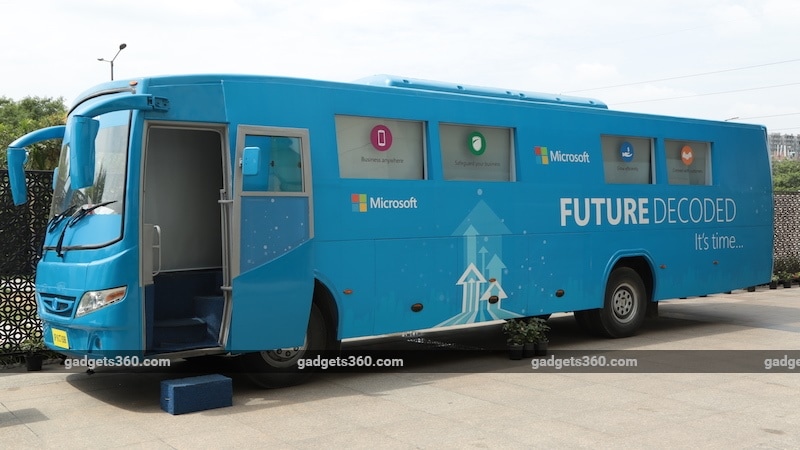 Imagine the struggle a large technology company faces in India. You want to cater to the millions of mom and pop stores in the country, but they are happy offline. As companies scramble for ways to bridge the gap, Microsoft may have found something - to get people onto the information highway, it's hitting the highway itself.

According to an Indian government report, there are about 51 million MSMEs in the country, but most of them have little to no online presence. The businesses - think of mom and pop stores, and small hotels in your neighbourhood - are limiting their potential, and for the Silicon Valley companies that are trying to find new customers as developed markets get saturated, it's a bit of an opportunity. But that opportunity, executives say, comes with a catch: it's really difficult to turn such people into customers.

"In general, awareness of any technology is an issue," says Rajiv Sodhi, leader of partner ecosystem at Microsoft India. "That's because they don't have any means of communication, and they are anyway caught up with their own business."

"The second challenge is affordability. India is a very price sensitive market," Sodhi adds. "So people are very cautious before they make any investment. This third challenge is the do-it-for-me thinking. The customer expects you to show up at the door and fix the problem as opposed to [the] do-it-yourself approach we see in mature markets."

Earlier this year, Google announced free tools to help small- and medium-sized businesses in the country to swiftly create websites and make a mark on the Internet. The free lure isn't enough to tackle the challenge. The bigger problem is that folks running these small businesses are either unaware of the existence of online services, or they simply don't see how Google or Microsoft could help them. To tackle this, Google has held workshops where it walks people through the benefits of having an online presence, and how to get started.

Microsoft has also been eyeing the same market, but it is taking a different route this time.

For over a month now, Microsoft has been running a bus - an actual, big, blue bus - from the capital city of Delhi to various parts of the country, to reach out to people. It was in Chandigarh last week, and next up on the itinerary is a drive down to Jaipur. Microsoft says it's planning to criss-cross the country, though mostly visiting metros and other bigger cities where there is a higher concentration of small- and medium-sized businesses. Gadgets 360 had a chance to take a peek inside the bus before it kicked off its nationwide journey.

Inside the bus we met people like Rajesh Garg, sales manager at a company called eFreakz Technologies. The company offers solutions for businesses to easily file tax returns, taking the recently rolled out GST into consideration, Garg explains. The application which eFreakz Technologies offers, Garg adds, is built on top of Microsoft's services.

Garg is one of several Microsoft clients making use of Azure, or Office 365, or a suite of different services. Microsoft says it is inviting its clients to spend time in the bus and spend a few days as they pitch their solutions to potential customers.

These potential customers are small- and medium-sized businesses that Microsoft has identified using its strong partner ecosystem in India, Sodhi says. The company will park the bus at "prominent and commercial industry locations" to attract the attention of people, he adds.

As we walk inside, we see four to five Microsoft clients, all ready to demonstrate their own solutions. Abhimanyu Bagga, a sales executive at OnActuate, who had spent some time in the bus commended Microsoft's efforts. "The company is providing us with a great platform to demonstrate our solutions," he says. When we ask if he expects any of these businesses to become a client, Bagga says it's too early to tell. If nothing else, Bagga says, at least more people are now aware of his firm's solutions.

That's very much what Microsoft is trying to achieve with the bus. "Our objective was to solve the problem of awareness," says Sodhi. "Microsoft has very very relevant products and solutions that can help businesses grow. You needed a vehicle, literally a vehicle, to reach the SMB market in India. It was crucial that we showed up at their doorsteps."

The experience zone inside the bus that Microsoft has created, Sodhi adds, allows businesses to touch and feel the solutions. "We also have offer trials for instance to let SMBs give our solutions a shot and see if they find it useful," he adds.

Gathering these SMBs is no small feat, Sodhi says. "The reason why Microsoft focuses on partner ecosystem so much, is in a diverse market like in India, you need partners who help each other," he explains. "So should an SMB need help after they de-board the bus, they can catch some partner in the local market."

"Partners bring their own customers and people they would like to work with," Sodhi says. "We also work with industry associations. Every city, every locality has an industry association of sorts. Most SMBs are part of these associations, so we also evangelise with them to let them know that there is a bus coming and it offers benefits that are relevant to them. So I think it's a combination of our marketing, onsite placement, the partners that are there in the industry as well as industry associations to drive engagement to the bus."

The approach, analysts say, represents a more focused Microsoft, which is increasingly trying to broaden the types of businesses it caters to. In the past, Microsoft focused on converting businesses who used counterfeit products into its customers, says Sanchit Vir Gogia, chief analyst and founder of marketing research firm Greyhound Knowledge Group.

"Microsoft is moving from compliance selling to service selling," Gogia says. "They would find businesses that were running counterfeit Microsoft products and say that there will be an audit. That strategy brought in a ton business to the company. But that sort of strategy won't work forever."

"Microsoft stands to earn more if its resources are consumed more," Gogia continues. "It's a consumption model now. The customers need to see value in your service and continue to stick with you. That's where Microsoft is going now."

Another analyst shared a similar observation about Microsoft's efforts. "I think the company's strategy has changed over time with Azure. It's all about delivering a digital experience using the cloud. Additionally, the company has made good efforts in promoting 'openness' with the Azure platform," says Agatha Poon, research director for Asia-Pacific services at 451 Research. "In terms of market segment, just as other global players, it relies on partners to reach out to the SMB market. It does expect to see a lot more SMBs using Azure. It claims to have made significant investment in the SMB market, working with ISVs to take services to SMBs."

Over the years, Microsoft has started to make "aggressive push into tier-2 and tier-3 cities. With the Opec-Based model, it makes sense to bring every company - large and small - onboard utilising Azure cloud," Poon continues. "On the infrastructure side, Ctrls (a Hyderabad-based datacenter company) is fairly competitive. ISVs (independent software vendors) and channel partners that can provide prescriptive all-in-one service bundles are compelling as well."

The Indian SMB market has been evolving rapidly as an increasingly growing number of people come online for the first time, in part due to the tremendous decline in data cost. Microsoft's Sodhi commended Reliance Jio for generating awareness and making it possible for many to embrace the digital age. That said, there has been a change in the mindset as well, as more businesses start to invest in security.

"In the cloud era, security and agility come first, followed by cost," 451 Research's Poon says. "With the growing availability of new technologies and competitive offerings, companies can have more options. Taking artificial intelligence as an example, AI has been around for decades but not until recently, it was very cost-prohibitive. And now, we are talking about smart appliances and intelligent home. In my view, it's a combination of market and technology readiness."

But Microsoft is fighting one more battle. "The company's products and services are often perceived as expensive," Greyhound's Gogia says, adding that people also think that Microsoft is a company that only serves large enterprises, and not "mom and pop stores."

Microsoft's Sodhi disagrees, saying the company is offering cloud-based services to businesses of all size as long as their visions allign. "They don't require much investment at one time, you pay as you go," he says. Judging by the Microsoft clients and small business owners whom we spoke to, Microsoft's SMB bus might on the road to success in getting this message across.

Age of Empires: Definitive Edition Promises More of the Same and That's Great
Asus Is Betting on AR and Selfie Cameras as the Next Big Things