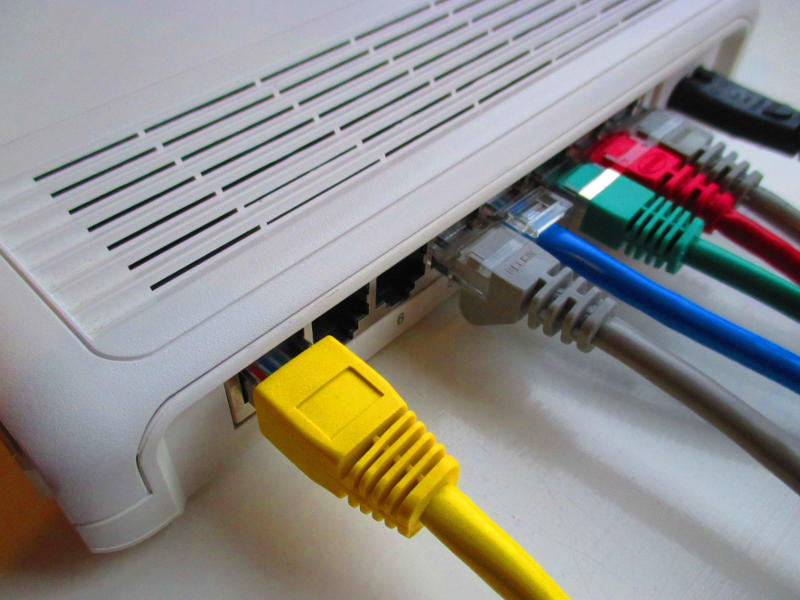 The future is already here, it's just not evenly distributed, says science fiction author William Gibson. It's especially true for the state of broadband in the country. Content delivery network Akamai notes in its Q3 2015 State of the Internet report that India, at 2.5mbps, had the lowest average connection speed among ten Asia Pacific countries surveyed in the region. The global leader, South Korea, has an average connection speed of 20.5mbps.

If you're looking for the fastest speeds in India, try heading to Kochi-based incubator Startup Village, the first in the country to get Gigabit (1000mbps) speeds in late 2012. India's public universities are also providing phenomenally fast speeds, judging by Speedtest screenshots on a Quora thread. We also looked at various telecom forums, Reddit discussion groups, and of course, searched for connections and prices on our own as well, to try and catch all the major providers who are claim to be delivering high speed connections. Do note that we have not verified these speeds first hand.

For the purposes of this roundup, we've tried to identify wired broadband ISPs in the country that that are offering download speeds of 50mbps speeds or higher to consumers. Well-known ISPs such as Tikona, Airnetwork, or Mach1 broadband, Alliance Broadband, or Excell Broadband (and many more) that offer a top speed under 50mbps didn't make the cut.

With a growing number of ISPs offering 50mbps at affordable prices, it seems to be a good cutoff point, available at monthly billing plans between Rs. 1,500 - Rs. 2,000, including taxes. Note that ISPs calculate speed in bits - so a 50mbps speed translates to downloads of 6.25MBps or megabytes per second speeds, which should be ample enough for a family to make video calls, stream movies or music, and download that Windows update simultaneously.

1) Hayai
Incorporated in 2011, Hayai Broadband Private Limited has the most consumer friendly prices and speeds, with monthly plans ranging from Rs. 899, pre-service taxes for a 100mbps connection with a 50GB data cap. The company offers 1Gbps speeds with a FUP (Fair Usage Policy) cap of 500GB for Rs. 5,099. The company also an arcane 95 percentile billing plan, along with all you can eat plans, but based on views of users on broadband forums in the country, it has been slow to expand, and there is a substantial waiting list for its service in Mumbai. The company has shared a list of cities it plans to expand to in Maharashtra, Gujarat, Rajasthan, Delhi, Karnataka, and Tamil Nadu.

2) Hathway
Hathway provides broadband services in over 13 cities, but not all of them support 50mbps speeds, which are presently available in the nine cities listed below. Plans range from Rs. 2,099 for a three month plan at speeds of 50mbps with a 20GB monthly FUP data cap. Hathway's 'Adv Fiber HD 125 plan' offers 5mbps speeds with a 125GB data limit at a competitive three month subscription price of Rs. 3,749. 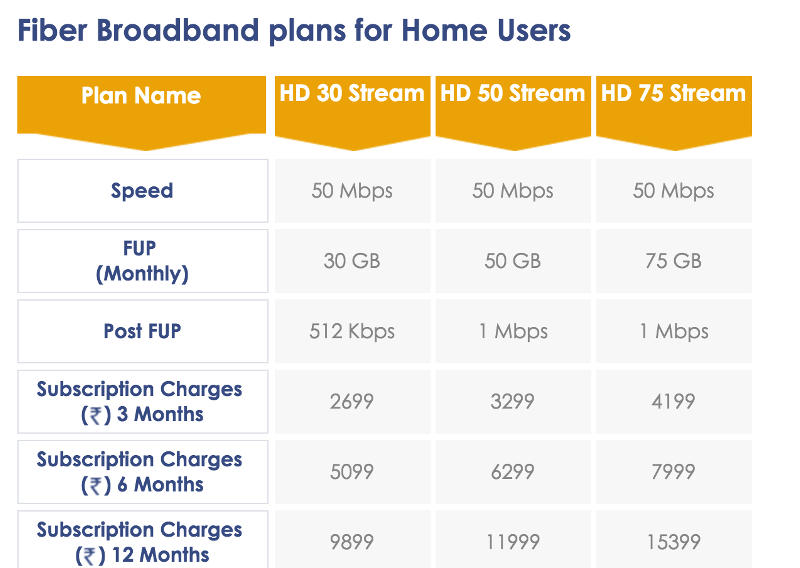 3) ACT Fibernet
Focused primarily in South India, ACT (Atria Convergence Technologies Pvt Ltd.) is the largest non-telco ISP in India. The company provides fibernet, digital TV and HD TV services, with affordable monthly tariffs under Rs. 2,000 for 50-100mbps speeds in Bengaluru. Its Fair Usage Policy (FUP) applies only on downloads, while uploads are not counted in FUP, according to the FAQs. As ACT Fibernet uses fiber-to-the-home technology, it doesn't require any modem or a land-line phone, and can be plugged straight into a PC with an Ethernet port, following which one needs to log into their Web portal with their account ID and password. This can be a bit of a pain point, but ACT Fibernet lists five reasons why it has decided to go with such a configuration.

4) YOU Broadband
YOU Broadband offers cable modem broadband services to residential, SME and corporate customers in the states of Gujarat, Maharashtra, Karnataka, Haryana, Telengana, and Andhra Pradesh. The 'YOU WTF 100' plan offers a 100mbps plan for 200GB per month at Rs. 1,732 in Bengaluru. However, while personal user accounts may vary, Reddit users seem to prefer Act Fibernet over YOU Broadband in terms of consistency of speed, up time, and user support.

5) Den Boomband
Primarily focused on North India, Den Boomband offers 50mbps plans starting at Rs. 1,200, with a 30GB FUP data cap. The 100mbps plans are priced at Rs. 3,500, with a 100GB data cap. The website has a map-based search to find out if it's available in your locality, and uses a vote-based system to map out its expansion plans. Many users have complained about outages and slow speeds though, and Den has a 1.5 star rating on Facebook.

6) Spectranet
Headquartered in New Delhi, Spectranet says it provides truly unlimited broadband, with no caps on data consumed. Its 'Success Unlimited' plan provides 50mbps speeds at Rs. 5,547. Spectranet is currently running a three-month trial offer with 100mbps broadband speed in Gurgaon at Rs 1,199 per month with no download limit, and said that it will be rolling out this offer in other cities this year.

7) Asianet
Operational in a total of 14 districts in Kerala and Tamil Nadu, Asianet offers FTTH/DOCSIS 3 connections with plans for 50mbps speeds starting at an affordable Rs. 549, but with a 7GB usage limit. It has over five other plans at 50mbps, with the 'Xtream 2499', offering a 160GB usage limit at a monthly subscription price of Rs. 2,499. The ISP is notable for providing a FUP breaker, which is higher than the monthly usage limit, following which it charges users 20 paise per MB. 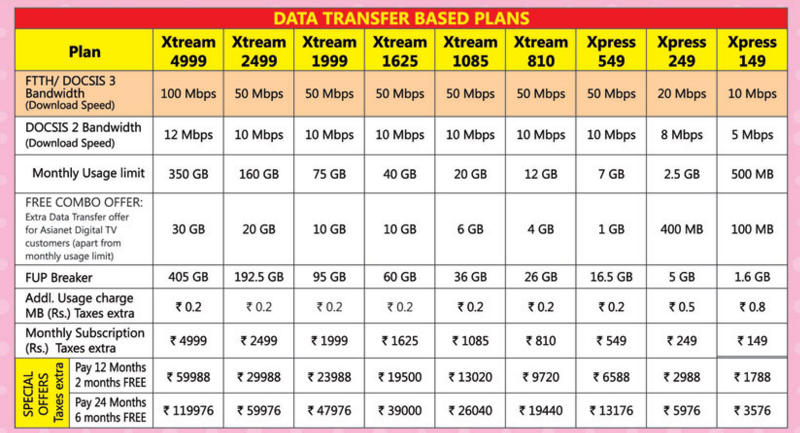 9) Airtel
Telecom operator Airtel is offering FTTH plans in select buildings in Delhi NCR region, Mumbai, and Bengaluru. You will have to contact your local Airtel agent to find out if FTTH services are available in your area - ask for the availability of Airtel's Bolt plans, which offer 100mbps with a monthly data cap of 100 GB starting Rs. 2,399. 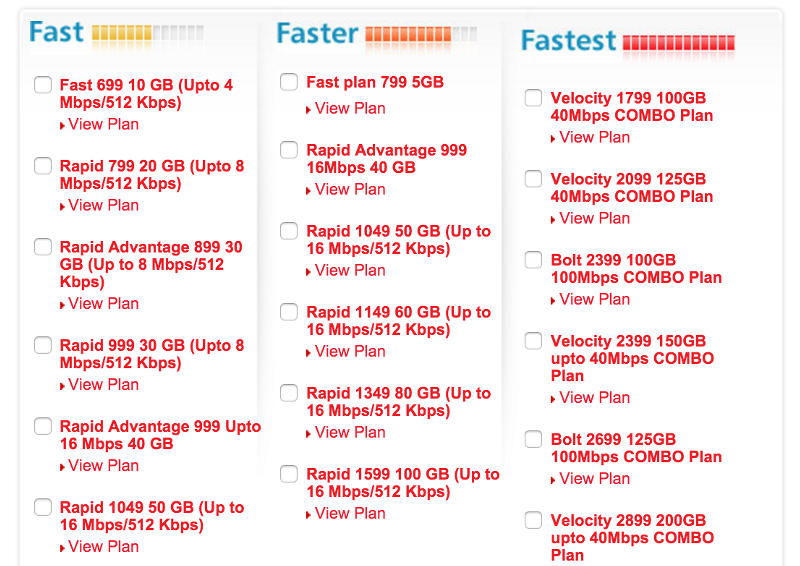 Others
Apart from these providers, we found some more connections but didn't see as much discussion around these. BSNL, the state owned telecom provider offers fibre to the home services in 18 circles, but has rather exorbitant prices for 50mbps plans, at Rs. 9,999 per month. MTNL also offers FTTH services in Delhi at a monthly service charge of Rs. 2,990, and Mumbai at Rs. 4,999.

Tata Docomo had launched its FTTH services in July 2013, starting with Bengaluru. However, it is not very clear where else it is offering its services, as its website doesn't seem to clearly mention any details on cities where it is available, and customer care is clueless as well. Tata Docomo offers a 50mbps plan starting at Rs. 1,999, which comes with a 20GB data cap.

Operational in Punjab, Connectzone offers FTTH speeds with monthly plans starting at Rs. 849 for 5mbps, to Rs. 4,999 for 100mbps, which comes with a monthly data cap of 100GB. Gurgaon-based Nextra Teleservices has a FiberBolt 50 plan starting at Rs. 1,999, with a 30 GB download limit. Other players include Powernet, which offers 50mbps plans at Rs. 3,000 in Dwarka, Delhi.

In the West, We Internet, a Mumbai-based ISP has broadband plans upto 100mbps, as does SmartLink Broadband, operational in Powai and nearby areas. In the South, some ISPs to offer 50mbps speeds or higher speeds include Bengaluru-based ISP Namo Networks, and TTN Network, Chennai-based Cherrinet offers 100mbps speeds at Rs. 1,499, with a 125 GB data cap, while OoDoO offers 50mbps plans at Rs. 1,599 per month.