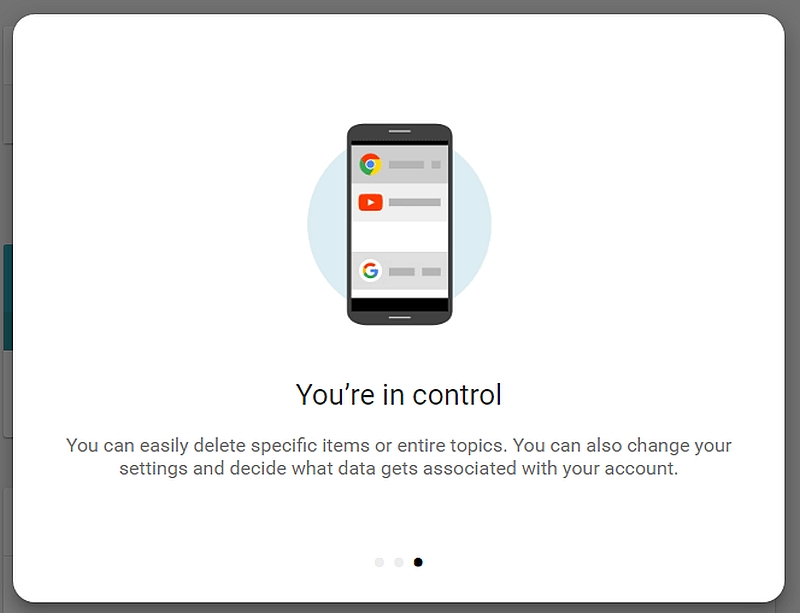 Google services are everywhere - it might not always be obvious, but just about everything you do on the Internet could potentially be powered by Google. It's got the most popular search engine in the world, and the most popular email service (not counting the many, many businesses that use Google Apps for stuff like email), the leading Internet browser, and the most used smartphone operating system, around the world. So it's really no surprise that Google also holds a ridiculous amount of data about everything you have done. It has launched a new tool called My Activity to manage ads and personal data, and using this tool is a quick (and scary) way to realise just how much Google actually knows about you.

Google's My Activity page helps you to track things you've searched for, pages you've visited, videos you've watched, and so on. Using the tool, you can delete entries that Google has stored, and change the settings for your account, so in theory at least, Google is giving you control over your online identity, which sounds like a very positive development. 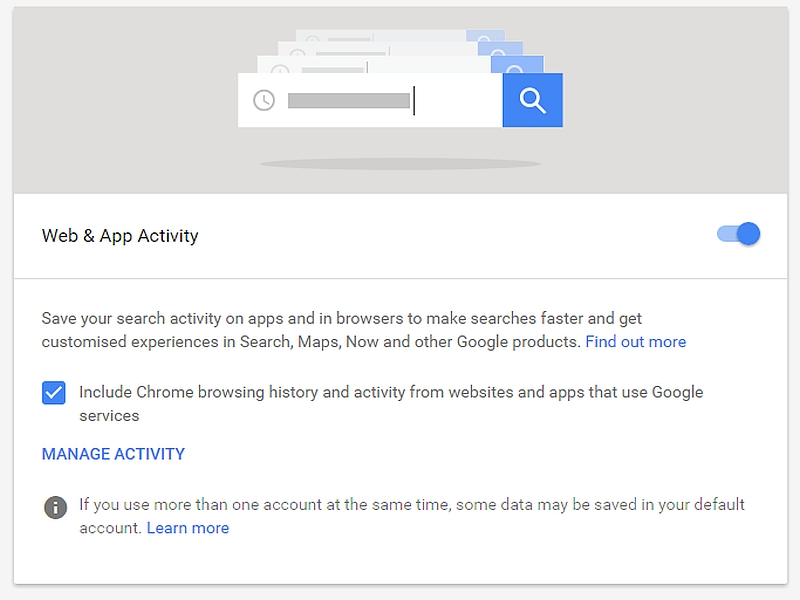 The home screen shows the data for today. In this correspondent's case, it showed 14 items - this included Android apps launched, and things we searched for on Google - and as you scroll down, you can go through the list, organised by time of usage, with the most recent items being displayed first.

Data for the day before had 119 items - this included Android, Search, Chrome, Now, and Ads. The problem here is that while you get a visual breakdown showing how much of each you used during the day, it doesn't show specific numbers, only a bar that's filled to show percentage; and from this list, you can't easily jump to specific categories - for example, if you wanted to see what the ads were, then you'll have to scroll down. 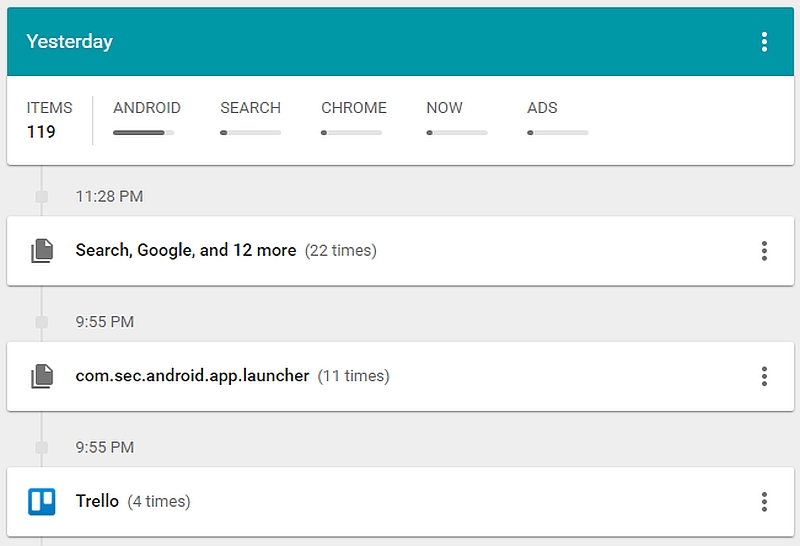 Clicking on these items brings up more details, though it isn't really too informative - which is a good thing if you're concerned about privacy. For example, there's an entry that says com.android.contacts (4 times). Clicking on this for details just shows that you used the contacts app on your phone four times, and shows you the times you used it. Clicking on the details button for the individual launches just shows that you used the app, and shows the time, but it doesn't tell you if any calls were made, any numbers opened - just that the app was launched. In this case, it was launched to check missed calls, but the My Activity page doesn't tell you that, which is probably a good thing, indicating Google isn't reading your mind (yet). 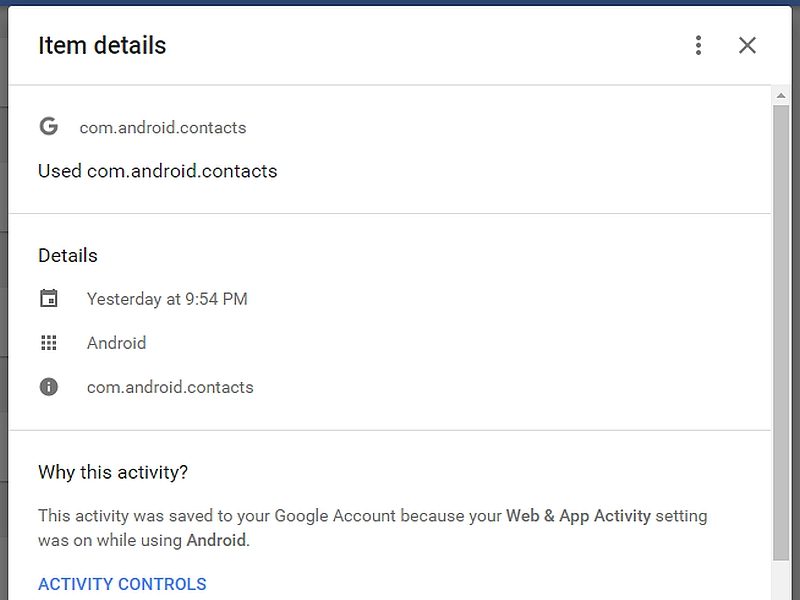 You should know that you can easily delete the data - the hamburger menu on the top right lets you delete by date, where you can delete today's data, or a week's, or a month's - and you can filter by keywords and categories using the search bar on top, and then delete just those results if you want.

There isn't much more to it - you can choose Delete activity by in the menu on the left side to delete by categories; you can switch between Item and Bundle Views, and you can go to Other Google activity which shows you other stored data, though not in the same item by item format. For example, Device information just shows basic information; Google Takeout lets you download all your past searches, which could be interesting for researchers, while Location history is probably the most worrying option because it shows you a timeline of every place you've been to. It's pretty smart at categorising things as well; for example, that two day weekend trip you took shows up on Google's history, and it shows your drive from home to the train station, the train's journey, and the places you went to once you reached as well. 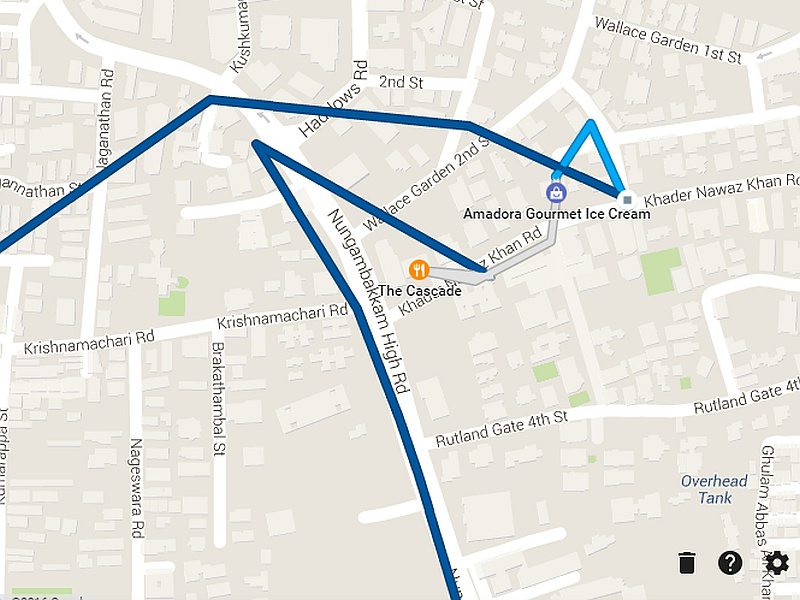 Went to a restaurant for dinner, and then walked to the ice cream parlour? Google knows. Took a walk along the beach? Google can tell that you weren't in your car and can actually show you how you walked across the sand towards the water at an angle, and then turned around and went back on the straight path. It's all colour coded so you can easily see all of this for yourself, and it's easy to see why people could be freaked out, but you can pause location history anytime you choose - or just click on the trash icon to delete the day's data, and it does enable some very helpful features with Google Now, so some people will consider it worth the trade-off. 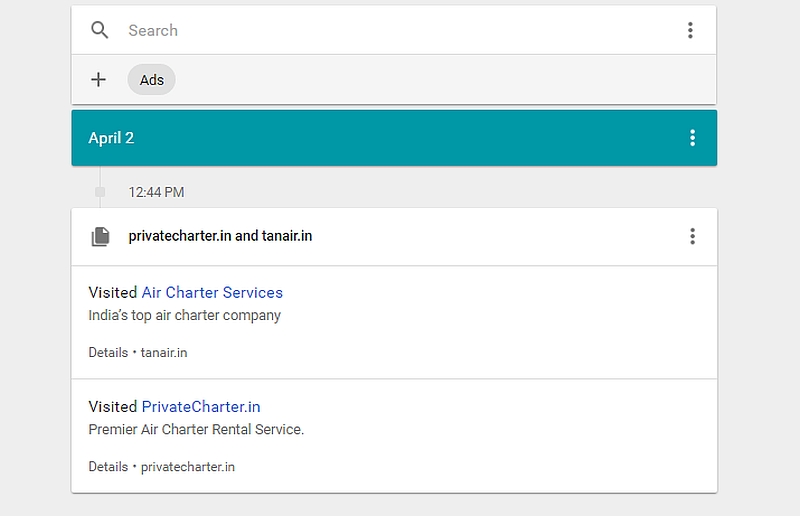 Sorting through the categories, My Activity can remind you of things you'd completely forgotten - such as the time you perhaps thought about finding out how expensive it would be to charter a flight to get your pet from Delhi to Bengaluru. It turns out that a typical day can be pretty weird - you might go from ordering dinner, to checking to see if there's a movie running on the weekend, to posting a tweet, to looking for details on Shakespeare's various murders. In a way, having access to Google on our phones has turned search into an exercise in understanding our stream of consciousness - saw a Tweet, or a video, or heard a song that triggered an association in your head? Put it right into the search bar and see what comes up next. 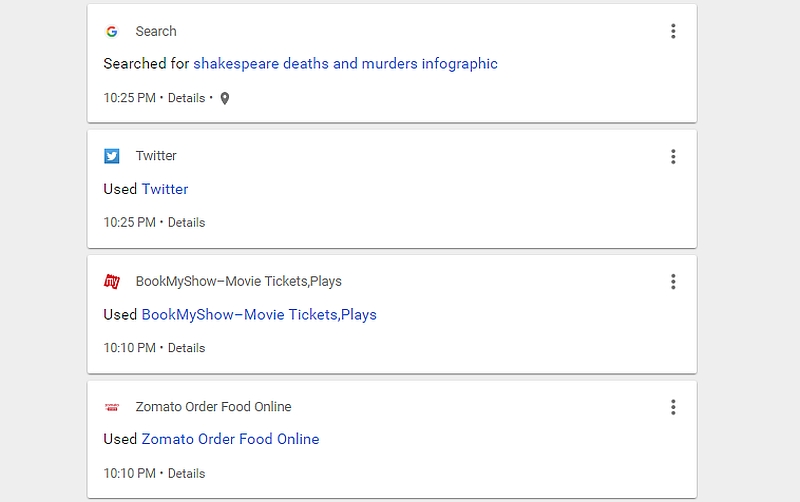 It taps into the same part of the mind that gets lost in Wikipedia crawls and disappears into TV Tropes to emerge days or weeks later, and seeing it at work can be a little surprising. For example, why there are around 12 searches for steaks on July 2 in quick succession, with nothing related to food either before or afterwards, is very unclear right now. The searches were happening at 7pm and I remember being in the physiotherapist's clinic at the time, which makes me wonder what I was thinking at the time? It's one of the mysteries that My Activity unfortunately can't solve as of now. 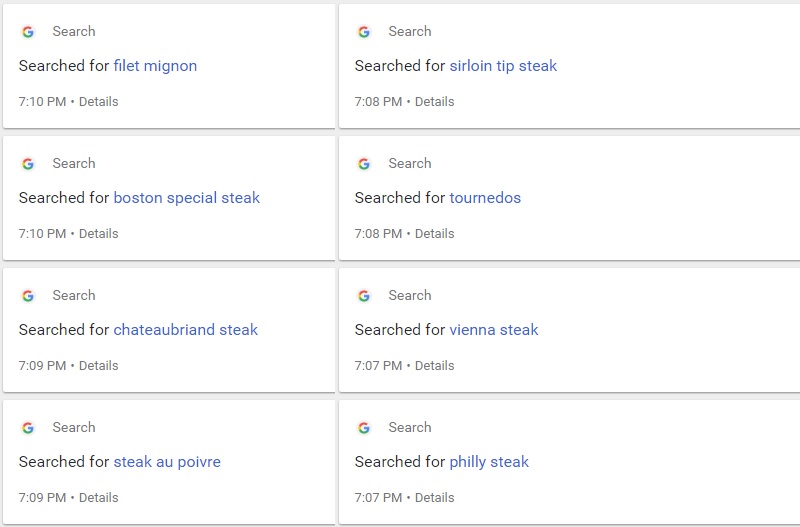 If you're starting to freak out about just how much Google actually knows, you're not alone, but the good thing is that the tool is pretty open and allows you to edit details. Want Google to forget about your most embarrassing searches? It's possible, though it'll take a little effort to go through everything you want it to forget - there will be a lot more than you expect right now. You can also try prevention instead of a cure - there are ways to get Google to stop tracking you on the Web and most of the steps you have to follow are pretty simple so it shouldn't be very challenging. You can also go to the Activity Controls menu to turn off tracking for anything you don't want recorded.

At the end of the day, there are too many ways in which we can be tracked, and some data is going to be recorded; the best that can be done is to limit this, and moderate the data that does get stored. My Activity is disturbing and fun at the same time, but most companies are working hard to track as much data as they can, and most of them don't ever peel back the curtain, so for that reason at least, we're going to be playing around with My Activity for some time now.