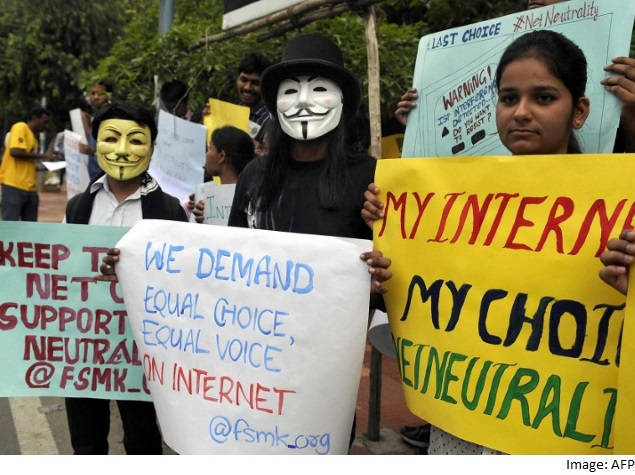 A DoT committee has submitted its report on Net Neutrality in a 110 page report on Thursday, which recommends adherence the core principles of Net Neutrality outlined in the annexure of the report. A cursory glance seems to suggest that this report is pro Net Neutrality, but a closer look raised some concerns.

Net Neutrality became a hot button issue earlier this year after Airtel launched a platform that provides free user access to some websites on its network, with bandwidth paid for by companies. Soon after that, six companies backed out of Facebook's Internet.org in April this year following a volunteer-run campaign that received over a million responses to TRAI's consultation paper on OTT services.

DoT's suggested guidelines outline an indicative list of criteria to be used for testing the core principles of net neutrality, which include 15 parameters - user rights, content, throttling, transparency, QoS, and data protection. We've examined some of the loaded statements from the report that warrant debate and scrutiny. Here are nine screenshots from the DoT report that we feel are cause for concern.

1. Zero rating is not allowed - unless you're asking beforehand 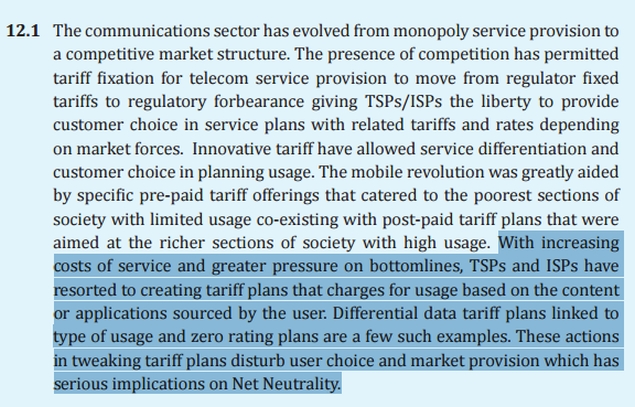 As you can see, in Chapter 12 point 1, the panel clearly says that ISPs should not alter tariff plans to charge for "usage based on the content or applications sourced by the user". This seems to very clearly suggest that the telcos should not be able to charge a higher rate for the use of a service like WhatsApp, or charge a differential rate for watching videos online. At the same time, the same point also talks about zero rating plans, and so it appears that concepts such as Internet.org and Airtel Zero won't be allowed.

2. All tariff plans must confirm to Net Neutrality, but not necessarily.

In the next point, 12.2, the DoT committee also notes that all tariff plans must conform to Net Neutrality.

However, it's also clear that the committee wants to hedge its bets and leave its options open, because it states that there are too many possible permutations, and so it cannot pre-determine all possibilities. Instead, in 12.6, it suggests that TRAI will get to determine whether plans are permitted or not, by requiring them to be filed with the regulator in advance, and by being able to address them on a case-by-case basis after the act if needed.

3. Since the rules are open to interpretation, nothing's really changed

What this essentially means is that in real terms, nothing has changed. The rules are still fluid and undefined, and tariff plans may or may not be addressed at some point in the future.

4. Issues are raised, and then dropped immediately 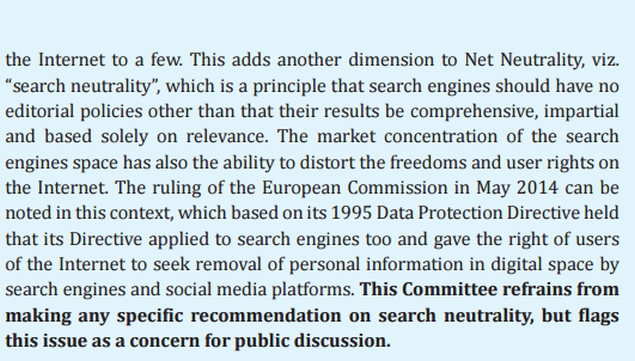 Interestingly, in 11.10, the paper also talks about "search neutrality", which could be a concern for Google. Eventually however the committee has refrained from making any comments about this, only noting that it is a matter of concern, and "requiring public discussion". 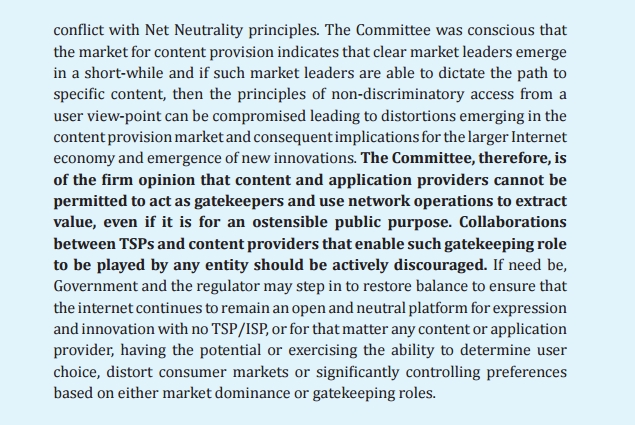 One interesting result in the zero rating debate though is that the committee is very clearly saying that "content and application providers cannot be permitted to act as gatekeepers and use network operations to extract value, even if it is for an ostensible public purpose."

It adds that "collaborations between TSPs and content providers that enable such gatekeeping role to be played by any entity should be actively discouraged." From the outside, it certainly looks like this point, together with 12.6, tells us that Airtel's lobbying for Airtel Zero was a lot more effective than Facebook's was, for Internet.org. 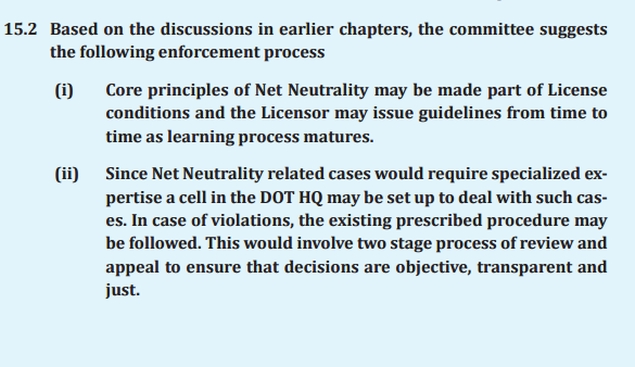 7. Net neutrality is great as a concept, but so is free Internet access? 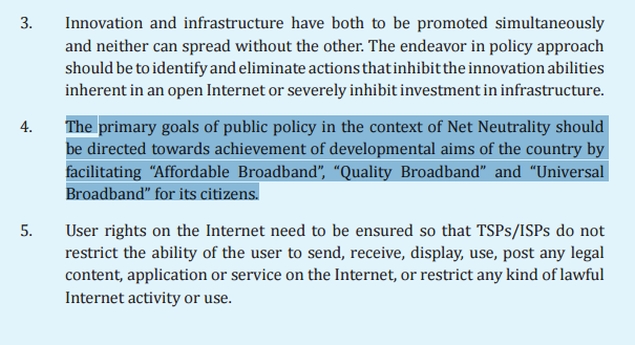 In the summary of recommendations (Chapter 17), things are made a little clearer. Here, the primary goal of net neutrality is defined as universal access for citizens. Looking at this, in context of the earlier statements suggests that Internet.org wasn't seen as the problem; only that Facebook was behind it.

The report seems to suggest a liberal approach to international VoIP calling services, but recommends that a regulatory response to domestic services from TSPs and OTT services, to be determined after public consultations and TRAI re-considerations on the same. This opens the door to TRAI perhaps even being able to require WhatsApp and other services to charge fees to make domestic calls in India, since it has oversight on tariffs. That seems unlikely, but is one more example of the report being vague about important points.

9. And national security makes everything else irrelevant

An inter-ministerial consultations will decide whether OTT service providers are compliant and will be allowed to operate. Will this mean that these OTT services will have to run their servers in India and create a backdoor for law enforcement and Indian security agencies to satisfy regulatory requirements?

The report seems contradictory and conflicted. On one hand, it says that OTT apps enhance consumer welfare and increase productivity, and should not be interfered with through regulatory instruments. At the same time, it recommends that the primary goals of public policy in the context of Net Neutrality should be directed towards achievement of developmental aims, facilitating "Affordable Broadband", "Quality Broadband" and "Universal Broadband".

The report ends with a note about how these are only recommendations, and not a final set of rules. TRAI is also currently engaged in consultation process on the issue, and its recommendations are expected to be published soon. We're still a long way from actual on-ground results, and hopefully, by the time any changes and laws are actually created, there will be much more clarity on how they will be implemented, instead of a mess of vague language.