Buying a Faucet on Amazon? Add a Handyman 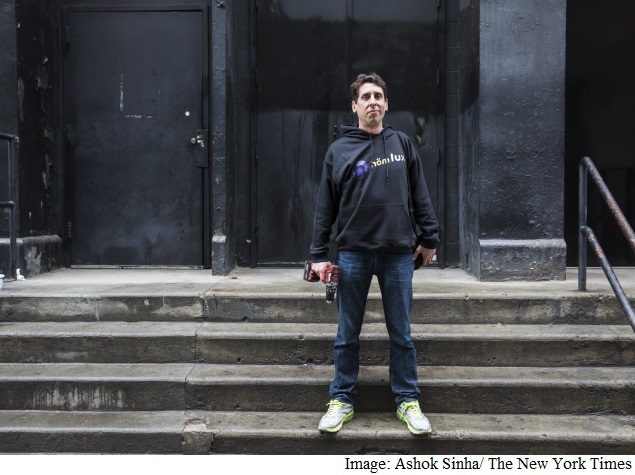 The installation of Deborah David's new kitchen faucet was a $180 job. But it lies at the heart of an expanding $400 billion commercial war.

Some of the biggest names in e-commerce along with a growing pool of startups are vying for a chunk of the fragmented, quotidian, heretofore entirely local market of electricians, plumbers, dog walkers and other manual labor, known broadly as home services.

The work may be mundane but the money and stakes are huge. Angie's List, the 20-year-old subscription service that offers reviews of local service providers to members, estimates the home services industry is $400 billion. Others put it at more than $800 billion.

"There are few pots of gold left as big as this on the Internet," said Marco Zappacosta, chief executive and a co-founder of Thumbtack, a startup that connects consumers with providers of a multitude of services, who then bid for their business.

The idea is to bring the efficiency and capabilities of the Web to some of the lowest-tech and least-transparent enterprises by connecting consumers with vetted service providers through online marketplaces. Most companies will then take a cut of each transaction that ensues.

Last summer Thumbtack received a big lift with a $100 million investment from Google Capital. Now Google is exploring entering the same business itself. How Thumbtack fits into those plans is unclear, Zappacosta said.

Other startups, like Pro.com, Porch and Redbeacon are creating similar online marketplaces. Angie's List, meanwhile, is elevating its game - last year it introduced a mobile app, called SnapFix, that lets a homeowner take a photo of, say, a broken screen door and receive bids to fix it.

The efforts shuddered last month when Amazon announced it was starting Amazon Home Services, which provides consumers with a list of vetted and insured professionals to do things like mount a new television. Price quotes and scheduling are available, during the checkout process. Jeff Bezos, Amazon's founder and chief executive, had already invested in Pro.com, and Amazon is working in partnership with TaskRabbit, another player.

Peter Faricy, vice president of Amazon Marketplace, said the company has 2.4 million service offers covering more 700 types of services. "I can tell you that with 85 million customers purchasing products from Amazon that needed installation or assembly, customers have told us that Amazon Home Services fills an important need," he said.

Of course, this is not just about building your cat tree or mounting your TV.

For Amazon it is another step toward becoming the conduit through which we buy everything, not just goods but services and entertainment as well.

"I think it is definitely a very smart move for them," said Sucharita Mulpuru, an analyst at Forrester Research.

For Google, where a spokesman said the effort was still in early stages, it is a chance to move beyond the advertising dollar to becoming part of the transaction itself, and challenge Amazon more directly, as it is trying with shopping and delivery services like Google Express.

"A lot of commerce begins with Google and has for the last decade," said Arun Sundararajan, a professor at the New York University Stern School of Business. "They have converted this into an incredibly profitable advertising business. But I've seen them make steps to get closer to the actual retail process."

Still, challenges loom large, and Mulpuru noted that it had been hard for startups to get traction. "Other than Angie's List, there really hasn't been, I think, a true competitive player in this space."

In the case of David's faucet, Amazon got the business - as it has with so many of her transactions over the years. In fact, the company's playbook unfolded perfectly in her situation.

When David discovered her faucet was leaking, she did what many in her situation would, she used Google to search for plumbers in her area. This would be Google's opportunity to come in and facilitate the transaction, analysts say. She found recommendations on Yelp and in New York magazine. She made calls, left voice mail, waited, and eventually spoke to a plumber who gave her a convoluted price estimate, she said.

She decided to forget about fixing the faucet and buy a new one instead. Being an Amazon Prime member, she knew where to turn.

After selecting a faucet on Amazon.com, she noticed a little icon offering installation services. She clicked and a small list of businesses and prices came up. She chose one, clicked and received a choice of times.

"I thought, OK, Amazon stands behind this," David said.

The technician came to her home at the appointed time and did the work smoothly and professionally, she said.

"All these websites now say we want you to be delighted. I always think that's ridiculous," she said. "Well, this is the first time I can say I am delighted. It was just a thoroughly pleasant experience."

David estimates she orders all manner of goods from Amazon a couple of times a week. So it was not a big stretch to buy a service through the company, too. And that is what Amazon is counting on.

The other party in this transaction was Homlux, a little company that provides an array of home services to residents of the five boroughs of New York City. It was the company David chose to install her faucet.

Matt Feldman, an entrepreneur whose last venture was a video company, founded Homlux a year ago. He got a call out of the blue a couple of months ago from an Amazon representative who said his customer reviews made him eligible to apply for the company's new home services program. After supplying insurance and other documentation and making employees available for background checks, Homlux was selected.

The experience has upended his business, forcing him to cut his price for some services, like mounting TVs, in half to compete with other Amazon-backed providers. (David chose Homlux largely because it offered the lowest price.) But that, in turn, has brought in so much new business that it has been hard to keep up, Feldman said.

"I look at it as an opportunity - it's Amazon," he said. But, he added: " I would say it's early days still. We are trying to make it work. It's a little difficult adjusting with the new prices, but there's definitely volume there. We're interested, but a little nervous about the low prices."

Amazon also takes a cut of each transaction, 20 percent for a TV mounting job, for example.

Meanwhile, the offerings are veering away from the everyday and into the wacky. Amazon's "other services" section lists goat grazing and "silk aerialist."

"Amazon is always focused on having the widest selection on earth," Faricy said, "and we will do the same with services."