Best of CES 2017: The 6 Most Interesting Things We Saw at CES 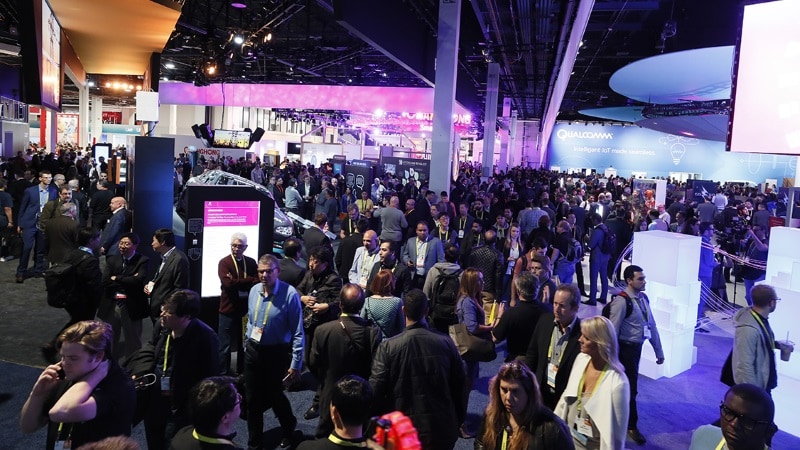 To say that CES is enormous would be an understatement. Officially, there are 3,800 exhibitors spread out over 2.6 million square feet of hotel and convention centre floorspace, but there are peripheral gatherings and an untold number of companies who park themselves nearby and compete for attention as well. In amongst the millions of products and ideas there are to be seen, finding something that could be called the 'Best of CES 2017' was difficult but not impossible. And indeed, we found a few products at CES 2017 that stood out for a variety of reasons - good, and not-so-good.

At CES 2017, there were fridges that take photos of their contents that you can check remotely, TVs so thin that they can stick to your walls with magnets, smartphones which let you see how clothes look on virtual models that appear right in front of you, and gaming laptops with three screens – all from some of the world’s biggest technology companies. There were also hundreds of startups and first-time exhibitors from different corners of the worlds at CES 2017, showing off ideas that could one day become just as mainstream.

1. Amazon Alexa
Amazon itself wasn’t showing off products at CES 2017, but its work was evident thanks to partnerships with a variety of companies. LG kicked off the first press conference of the show with an Alexa-powered refrigerator and a pair of home robots which can order groceries, control smart appliances, and stream music from Amazon. Lenovo showed off its Smart Assistant, essentially a third-party Amazon Echo, Hyundai is demonstrating cars that use Alexa, and various startups are building products such as headphones using its framework. Natural-language voice assistants are the current big thing in tech, and Alexa is the only viable alternative to Google, giving companies every reason to tie it into their products and services.

2. Honda Riding Assist
A huge part of CES 2017 was dedicated to cars and bikes, which isn’t surprising considering the amount of tech that goes into automobiles these days. Even with the world’s top luxury brands in attendance, Honda stole the show with its Riding Assist concept, a bike that can stay upright without any support, compensate for manoeuvers that would topple ordinary bikes, and even drive itself when commanded to do so. This CES 2017 tech could one day make transportation safer and more accessible to a wide range of people.

CES 2017: Our Picks So Far From the World's Biggest Tech Show

3. Nvidia GeForce Now
While Nvidia isn’t going to stop selling graphics processors anytime soon, the company has diversified into massive-scale number-crunching in a huge way. At a huge CES 2017 pre-show press conference, founder and CEO Jen-Hsun Huang announced that Nvidia has finally achieved a goal it has been working on for years: the ability to host games on its own powerful servers so that PC users without an expensive gaming machine can offload all the hard work and stream just the video output like they would a movie. Input lag and bandwidth requirements are the biggest hurdles, but pricing scales with the amount of power you need, so a lot of people who can’t afford a high-end PC could end up being very happy.

4. Qualcomm Snapdragon 835
Each year, Qualcomm announces a new flagship processor for smartphones and connected devices. The Snapdragon 835 was first announced over a month ago, but CES 2017 was the first time its capabilities were on display to the public. While no actual phones using the Snapdragon 835 were being displayed, reference units were running demos including extreme vibration reduction in video recording, positional audio detection and filtering, and live 3D video stitching with directional audio. This new chip will be built on a 10nm process, and is smaller and more efficient than the Snapdragon 820/821. Phones that use it will support advanced machine learning and VR/AR experiences, plus of course huge screens, high-resolution video capture, biometric security, and improved battery life.

5. HP Sprout Pro
The original HP Sprout and Sprout Pro started out as experiments in 2D and 3D interaction, and was aimed mainly at children. Now, HP is going after a different market altogether with the second-generation Sprout Pro, a slicker and more capable version of the same idea that was unveiled at CES 2017. The projected horizontal surface is now full-HD, and can be a full-fledged secondary display. You can draw directly into software using a stylus, which feels just like writing on paper. 3D scanning is simple and quick – all you have to do is hold objects beneath the scanner and turn them around till you see the resulting model on screen fill out. There’s a kiosk mode that will allow users to customise things they want to buy and see how they look before pulling the trigger.

6. Inspero Vinci Smart Headphones with AI
Finally, we have the Vinci Smart Headphones with AI, a product that snagged our attention at CES 2017 for all the right and wrong reasons and brought us immense joy. We are truly inspired by the sheer absurdity and audacity of it – we have no idea who would ever want to wear or use one of these things, but we love the fact that somebody not only thought of it, but went ahead and made it. Basically, you have the equivalent of an iPod touch physically jammed onto one side of a comically oversized headset. It can store music, work as a Bluetooth headset, or stream Web content over Wi-Fi or 3G with its own SIM card. Swipe gestures let you control playback with the device on your ear, and AI lets you generate playlists as well as interact with devices using – you guessed it – Alexa. Inspero set out to raise $50,000 on Kickstarter and ended up with nearly twenty times as much, so we’ll probably see these out in the wild, even if only as the ultimate self-referential hipster gag.

Overall, CES 2017 was fairly underwhelming, with no emerging product category like drones or wearables to get excited about, and no banner feature like 4K and 3D in years past. There was no sign of progress towards making IoT devices practical and desirable, which means that no company has found its footing even a year after CES 2016’s high-volume proclamations of it being the next billion-dollar industry. What this year’s edition did show us is that technology is making its way into even more aspects of our daily lives, and there are still a few companies bold enough to try new things.