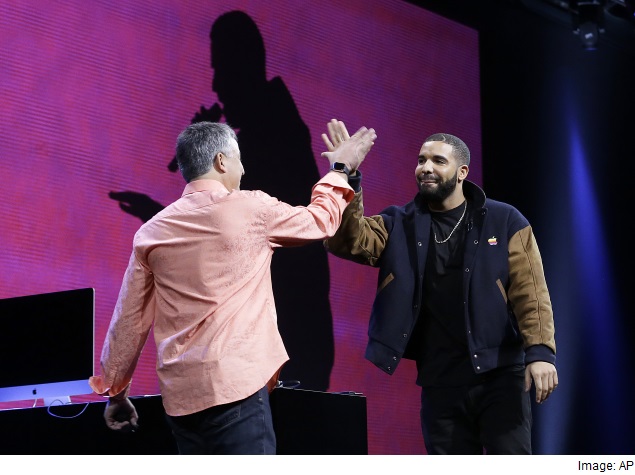 Apple, unveiling its bid to be a powerhouse in streaming, has new celebrity faces the rapper Drake, and his collaborator The Weeknd.

The tech giant unveiled the new Apple Music on Monday, hoping to take a greater slice of the booming on-demand music market away from rivals such as streaming leader Spotify and Internet radio provider Pandora.

Announcing the service at its annual developers conference in San Francisco, Apple brought out Drake, who credited the company that revolutionized digital music through iTunes with helping artists break out.

The Toronto rapper said that he had tried unsuccessfully to win the attention of major record labels in New York before his ascent in 2009-2010.

"As a kid growing up, I always wondered if my city or even my country would have somebody break into the global music scene as a true superstar. The dream seemed unattainable at the time," he said.

"The dream of being a new artist, like myself five years ago, and connecting directly with an audience has never been more close and reachable than right now."

Drake released his latest mixtape, "If You're Reading This It's Too Late," on iTunes as well as streaming services in February before any physical copy.

Such a strategy is resented by brick-and-mortar record stores, but the mixtape nonetheless went to number one on the US charts.

Drake hinted of further collaboration with Apple, saying: "As I'm working tirelessly on this next album, this comes at the perfect time for me."

The Weeknd, the Canadian R&B singer who frequently records with Drake, performed a new song for the Apple conference entitled "Can't Feel My Face."

Apple previously brought out star power in September when it launched its new iPhone with U2, who distributed a new album as a surprise gift to the half billion users of iTunes.

Many critics said that the strategy backfired, backed by the presumptuous belief that the whole world wanted to hear the Irish superstars, with U2 frontman Bono himself later apologizing.

The choice of a 28-year-old rapper as a public face comes as hip-hop mogul Jay Z spearheads Tidal, an upstart streaming service. Another rapper-turned-entrepreneur, Dr Dre, is part of Apple.