It is Amazon's first owned office building outside the US and its single largest building globally. 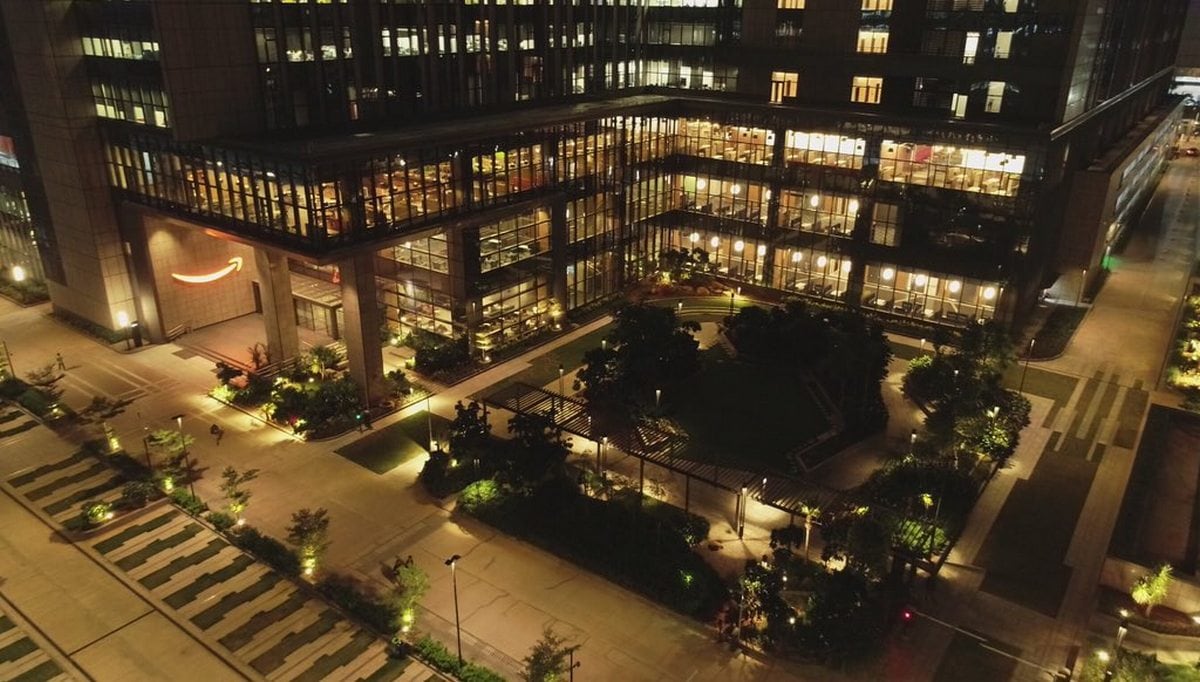 Built with over 2.5 times more steel than the Eiffel Tower, a built-up area spanning about 65 football fields, a helipad and 49 elevators which move one floor per second, e-commerce giant Amazon's largest campus building in the world is the latest landmark in Hyderabad.

Built in the Financial District, a key IT cluster, this campus with 1.8 million square feet office space is Amazon's first owned office building outside the US and its single largest building globally.

The massive campus, built amid the gleaming towers of various corporate giants, is equipped with 49 elevators, which can move a floor per second. Built on three million square feet of construction area, it is also Amazon's single largest building in the world in terms of area.

Amazon officials say the total built-up area, when spread out, will span over 68 acres or approximately 65 football fields. Out of total built-up space, 1.2 million square feet is earmarked for recreation and parking.

"The campus contains over 2.5 times more steel than the Eiffel Tower, measured by weight," revealed Amazon Vice President and Global Real Estate and Facilities Director John Schoettler at the inauguration of the facility recently.

Interfaith prayer rooms, a mother's room, quiet rooms, showers, helipad and an all-day open cafeteria are some of the key features of the campus, built in a short span of three years. The company officials say the structure is designed to facilitate inclusion and diversity.

It also features casual, collaborative workspaces, as well as private areas for concentration and confidentiality.

"Every detail is aimed at improving well-being and efficiency, from Destination Control Systems to manage elevators that can move 972 people simultaneously, to 290 conference rooms and 3 scrum areas per floor to foster collaboration," the company said.

As many as 2,000 persons were on site every day for 39 months to construct the building, spending 18 million man-hours.

Last year, the construction was awarded the Golden Trophy and Certificate from National Safety Council for safe construction process.

The campus has one conference room seat for every 3.25 workstations, higher than the global ration of 1:5.

With sustainability at its core, the campus has more than 300 trees dotting its grounds with three specimen trees aged over 200 years. It also has an 850,000 litre water recycling plant.

The company officials declined to divulge the investment made in this campus but said hundreds of millions of dollars were spent to create the facility.

Stating that the facility reaffirms their long-term commitment to India, they pointed out that Amazon already announced $5 billion investment in the country and another $ 500 million in food retail.

Amazon already houses its largest India fulfilment centre in Hyderabad. Spread over four lakh square feet, the centre is located near Rajiv Gandhi International Airport. The company last month announced that it will be expanded to 5.8 lakh square feet.

After Apple Inc opened its development centre in 2016, IT Minister K.T. Rama Rao had declared that Hyderabad became home to four of the top five most valued tech companies to have their largest offices outside the US.

Software giant Microsoft already has largest presence in Hyderabad outside their headquarters in the US.

Search giant Google also plans to build its biggest campus outside its US headquarters. Coming up on 7.2 acres in the Financial District, it is expected to house 13,000 employees. An agreement for this was signed between Google and the Telangana government in 2015.