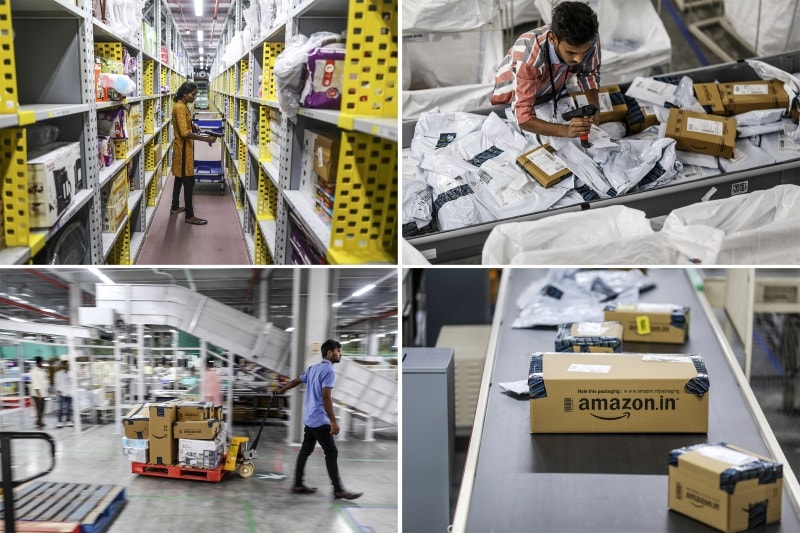 It's mere weeks to the festival of Diwali, and in a cavernous warehouse minutes from the Hyderabad airport, hundreds of workers are furiously sorting mountains of everyday items.

It's Amazon's largest - and newest - such center in India, and it offers a view into the company's ramp up in this crucial market ahead of a festival sale collision this week with local rival Flipkart Online Services Pvt. The Indian investments show the Seattle-based retailer using a strategy similar to the US, where a vast network of warehouses allowed it to offer quick, cheap delivery and distinguish itself from competitors like eBay Inc.

The e-commerce giant has a lot riding in the country after its washout in the world's other large market, China, where Alibaba Group Holding Ltd.and other local players have prevailed. Amazon has said its international loss grew over fivefold from a year ago to $724 million (roughly Rs. 4,670 crores) in the quarter ending in June. Part of that can be attributed to its investments in India, including additions to storage capacity.

"Fulfilment centers are extremely critical for the success of our Indian operations," said Amazon's India head Amit Agarwal, using company-speak for warehouses. "We have doubled our storage capacity in the last one year to meet our rapid growth in India."

Bangalore-based Flipkart still has a lead in the Indian e-commerce market. But Amazon is also expanding at ripping speeds, and in the last year alone has roughly doubled size on several metrics. Warehouse capacity has risen to 13 million cubic feet, sellers to over 225,000 and products to more than 160 million.

During the lead-up to the annual holiday, Amazon and Flipkart have played a cloak-and-dagger game, each waiting for the other to announce sale dates. Recently rejuvenated with an added $3 billion in cash after fresh funding from big name investors including Tencent Holdings Ltd., Microsoft Corp. and SoftBank Vision Fund, Flipkart is preparing to launch its own holiday blitzkrieg.

When the domestic player finally went public with its timetable, Amazon responded by timing its four-day Great Indian Festival Sale to exactly overlap with Flipkart's Big Billion Days Sale. The buzz of activity at the warehouse will only quicken when the Amazon sale opens on Thursday.

Flipkart, meanwhile, says it'll triumph by doubling sales over its own numbers last year and trounce competition by quadrupling shipments of smartphones. "Our Big Billion Days sale is not about discounts alone, but about exclusive selections on a plethora of products in mobile, fashion and appliances that rivals do not have," the company said in an emailed statement.

It's also boasting of industry firsts such as monthly payments against purchases charged to debit cards and hundreds of thousands of personalized video promotions on social media during the sale days. On warehouses, the company said it doesn't share numbers.

Diwali is the time when annual bonuses are paid in India, and families do their heaviest shopping. The festival extends over several days, starting October 17 this year.

"Amazon and Flipkart are more evenly matched today than ever before and it's a lot tougher to predict who'll be the winner in this year's peak selling season," said Mrigank Gutgutia, engagement manager at researcher RedSeer Consulting Pvt. "With the war chests they have, both are building up warehouses and logistics infrastructure."

Within miles of the new Hyderabad storage hub, is one of Amazon's largest global customer service centers as well as one of its biggest software development facilities in the world. All of these are hidden from public view - except on rare occasions like this warehouse visit. They are all testimony to Chief Executive Officer Jeff Bezos's aggressive Indian expansion that is backed by a $5 billion budgetary allocation.

Amazon's 41 warehouses in India are vital in a country where the largest online retailers are marketplaces without any inventory of their own in accordance with foreign investment rules for e-commerce. Their locations are crucial because the nation's logistics networks can be unreliable. They have to be close to sellers and with easy access to a density of buyers.

Those in the real-estate trade alert rivals to each other's warehouse searches, and competition is intense. Alibaba-backed Paytm E-commerce Pvt. is the newest competitor in the fray and just beginning to build capacity.

"On-ground superiority can give an edge to the players, bringing down supply chain costs, optimizing shipping and providing premium customers the fastest delivery," said Gutgutia, the analyst.

Walk beyond the "Work Hard.Have Fun.Make History" sign inside the non-descript Amazon warehouse codenamed HYD8, and the floor has a traditional Indian 'rangoli' drawing of the company's fulfillment mascot, Peccy. Pass the wall of metal detectors, and there's a 1.6 kilometer long network of conveyor belts snaking through the building's innards. The goal is to fulfill orders at the fastest time with the lowest possible cost, but there's not a single robot in sight.

"In India, we've adopted a hybrid model, a blend of people and conveyor," said Akhil Saxena, vice president, India Customer Fulfilment. Full-on automation and drone deliveries are as yet distant specks on India's e-commerce horizon. Fixed costs are high in the country while labor costs are low, the inverse of the West. So a vast number of workers toil in comparatively smaller warehouses.

The nation's patchy logistics network and the vendors' poor digital grasp mean that most operating on Amazon's marketplace prefer to drop their products to such depots, have their names appear in the 'sold by' box beside the product listings, and let the company worry about packing and deliveries.

There are about a dozen steps before items are shipped to the country's far-flung corners. Products ranging from shiny idols of India's elephant-headed god, Ganesha, to colorful smartphone skins and small hacksaws, are each quality checked, barcoded and laser scanned for exact dimensions. Finally, a computer algorithm helps 'slot' and optimise storage, calculating charges for sellers who pay for warehouse space - down to each cubic foot.

Unlike well-ordered supermarket shelves, goods are simply stowed where they fit, sprinkled across the facility for quick access based on computer algorithms. A row of kitchen blenders lie near a rack filled with baby diapers. Across the aisle are pillows, but sheets are nowhere in sight. The random sorting actually creates efficiencies, Saxena said. Ultimately, it's meant to be a streamlined operation to rein in overheads in a country where Amazon still bleeds copious amounts of money as it builds up.

In India, the company has grown revenue at about 124 percent year-on-year, totting up 85 percent growth in the first quarter and 88 percent in the second quarter this year, according to Agarwal, the country chief. A lot, however, rides on the upcoming peak sale period when Amazon and Flipkart will strain their hardest to get buyers' attention. Agarwal says he's counting on a "brilliant" season in terms of traffic, new customers and sales.

As he walks around the massive space, Saxena, a tall man with a mass of salt and pepper hair, can't help remarking on the big challenge Amazon has ahead in this vital geography.

In India, everything from sellers to logistics is at a different maturity level, Saxena said. To tackle it, he said, Amazon has to be "not just a global company, but also local."