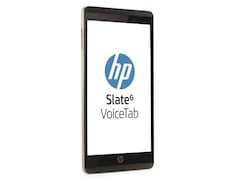 In a television commercial, Bollywood actress Deepika Padukone talks about how she manages to pursue two passions - acting and badminton - at the same time despite naysayers who believe it is impossible. Later, she introduces the HP Slate6 VoiceTab and says it does something similar by performing the functions of both a smartphone and a tablet. One might find the commercial cheesy but we find the communication effective.

Considering the competition, the HP Slate6 VoiceTab looks like a lost cause thanks to its subpar bui