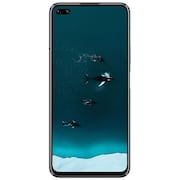 Honor V30 mobile was launched on 26th November 2019. The phone comes with a 6.57-inch touchscreen display offering a resolution of 1080x2400 pixels at a pixel density of 400 pixels per inch (ppi). Honor V30 is powered by an octa-core HiSilicon Kirin 990 processor. It comes with 8GB of RAM. The Honor V30 runs Android 10 and is powered by a 4200mAh non-removable battery. The Honor V30 supports proprietary fast charging.

The Honor V30 runs Magic UI 3.0.1 is based on Android 10 and packs 128GB of inbuilt storage. The Honor V30 is a dual-SIM mobile that accepts Nano-SIM and Nano-SIM cards. It was launched in Icelandic Fantasy, Phantom Star River, and Charm Starfish Blue, and Twilight Orange colours.