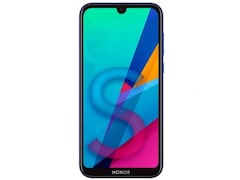 The Honor 8S runs EMUI 9.0 is based on Android Pie and packs 16GB of inbuilt storage that can be expanded via microSD card (up to 512GB) with a dedicated slot. The Honor 8S is a dual-SIM mobile that accepts Nano-SIM and Nano-SIM cards. The Honor 8S measures 147.13 x 70.78 x 8.45mm (height x width x thickness) and weighs 146.00 grams. It was launched in Black, Blue, and Gold colours. It bears a plastic body.

Connectivity options on the Honor 8S include Wi-Fi, Micro-USB, 3G, and 4G with active 4G on both SIM cards. Sensors on the phone include accelerometer, ambient light sensor, and proximity sensor.