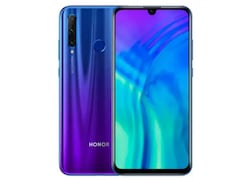 Honor 20i in Pictures

Honor 20i is the latest mid-range warrior from Honor, designed to challenge the dominance of Xiaomi, Realme, and a resurgent Samsung in a segment with cut-throat competition. Priced at Rs. 14,999, the Honor 20i promises capable cameras and feature-rich software experience, all bundled in a flashy body.

The Honor 20i offers a desirable combination of reliable performance, triple rear cameras, and an appealing design. But there are multiple areas where the phone falls short. The 6.21-inch full-HD+ display is sufficiently bright, but it renders slightly oversaturated colours. EMUI comes with a host of useful features, but there is some pre-installed bloatware as well.

The Kirin 710 SoC powering the phone proves to be a capable performer and can handle regular usage as well as gaming quite well. However, there are occasional stutters when heavy games are running in the background.

The phone captures crisp macro shots, but struggles with dynamic range under daylight and also renders slightly oversaturated colours. The night mode shots, despite bringing out the colours, still look grainy. The 25-megapixel front camera captures detailed photos, but does some smoothening as well.

The Honor 20i’s 3,400 mAh struggles to last a full day of usage and often drains completely before the end of the day. At its asking price of Rs. 14,999, the Honor 20i is not the best value for money, particularly in the presence of better alternatives from Xiaomi, Realme, and Vivo among others.

Honor 20i Price in India

Honor 20i Review – Affordable And Packed With Features, But Worth Buying? 09:49

Honor 20i User Review and Ratings