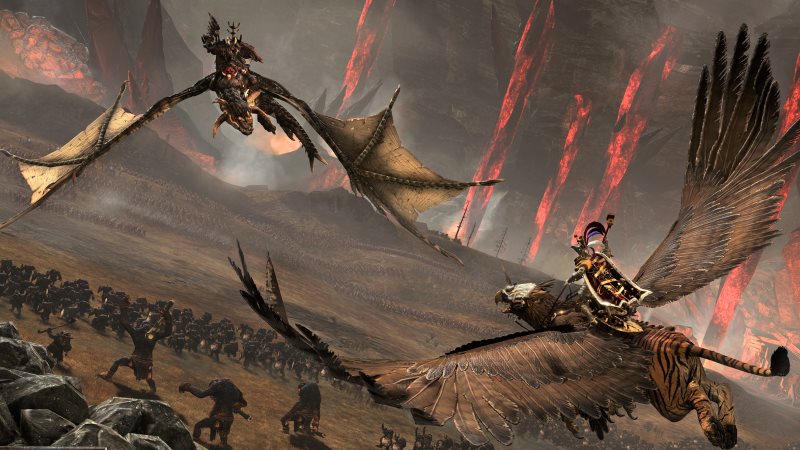 "War is unending," the narrator proclaims in the introductory video for Total War: Warhammer, the tenth title in the turn-based strategy series from Creative Assembly, and the first of its kind to eschew historical accuracy for a fantasy setting - the world of Warhammer.

But war has a cost: both human and monetary. Both form the twin pillars on which the game rests, and in turn your survival. For the most part, the latter - currency - could easily be construed as the most important element. Without regular resource collection, money is crucial to everything you wish to undertake, from building up your army to expanding your settlement's capabilities. Apart from these massive asset investments, armies also entail a daily maintenance cost known as "upkeep".

You earn money as a result of the buildings you choose to construct, be it a livery or a port, and by taxing the proles. From here, basic math dictates that you require a greater inflow than outflow to stay in the green. The larger the gap between the two, the more breathing room you have to build the future of your choice.

Money can't fight for you on the battlefield though - you need boots on the ground for that - which is where Warhammer's Old World truly comes alive. Technically, the second cost of war isn't entirely human, considering the diversity of races on offer. You can play as one of five factions: the Empire comprising of humans, under a young emperor and beset by unruliness; the Dwarfs seeking vengeance, and fighting a troubled past; the Greenskins made up of orcs, goblins, trolls, and giants, who have come together in their lust for carnage; the Vampire Counts that use the undead for their own purposes; and the Chaos Warriors, a nomadic tribe from beyond the mortal world. 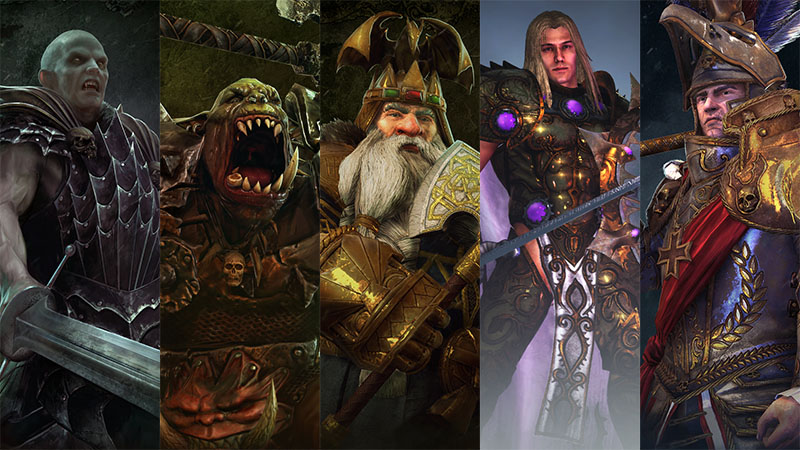 Warhammer is mostly a turn-based strategy game like Civilization, where you decide all your possible actions and then press a button to end that particular turn. Once you hit that button, the game will also show you what the other factions are up to as well, especially a) if they enter your territory, b) attack one of your defensive allies, or c) initiate any form of diplomacy with you. But it turns into a real-time tactical game during battles, like Age of Empires, with a twist. You can decide how your army is laid out before the actual battle begins, which helps to put your units in proper formations, be it a defensive barrier for the artillery or a flanking manoeuvre with the cavalry's assistance.

Each of the five factions is completely different from the previous one, which provides battles with an astounding amount of variety. The Empire has access to a bit of everything, without being particularly strong on any front. You can call upon Demigryph Knights (men riding a half-eagle, half-lion beast) to raid enemy infantry units, Celestial Wizards that can bring down the wrath of heaven for a spectacular display, or build range-expert chariot Luminark of Hysh. The Dwarfs rely on a defensive fighting style, with the aid of back-breaking artillery such as Flame Cannon and heavily-armoured soldiers called Ironbreakers. But they lack cavalry or magic, and this makes them slow on the ground.

The Greenskins use a mixture of Giants that stomp and chew their way through enemies (quite literally), self-healing Trolls that vomit acid bile all over the place, and Spiders that trample across the battlefield. They lack intelligence and any form of governance though, preferring to follow the old might is right rule. The Vampire Counts use an endless stream of the undead to serve in their massive armies, boosted by rising the fallen enemies to their cause. While they lack access to ranged weapons, they make up for it in the form of magic and flying units (dragons, primarily) to wreak havoc from the skies.

The last of the five, the Chaos Warriors - available free if you bought the game in the first week of its launch, and as paid downloadable content thereafter - imbibe the power of the Chaos Gods (intent on bringing about the apocalypse) to do their work, helped by other-worldly armour and beasts, such as two-headed dragons. 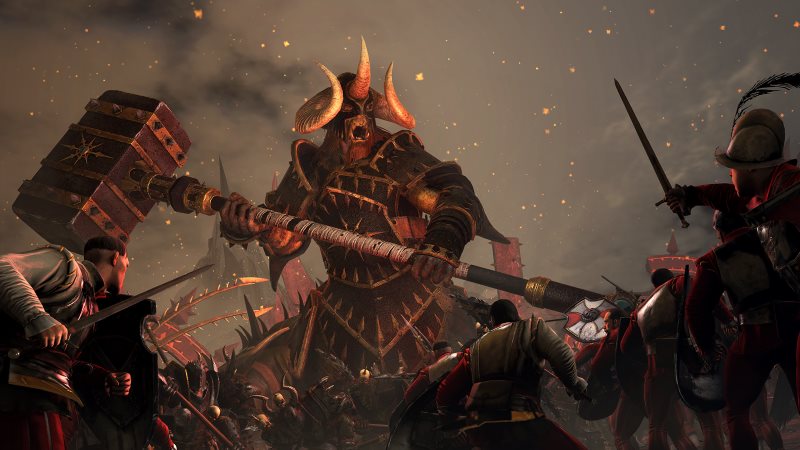 (Also see: Top 5 Strategy Games You Have to Play)

Not only do these factions play differently, they are also meant for different levels of player skill. The developers think the Dwarfs - with their defensive set-up - are the easiest to play with. Then comes the Empire and the Greenskins, who have a balance of melee and ranged infantry along with magical abilities. Higher up on the ladder are the Vampire Counts and the Chaos Warriors, who possess a tool like no other - corruption. Vampiric and Chaos corruption abounds when your armies or units move into an area. Spread enough of it to tank public order, and you can cause a rebel uprising of your kind. Chaos Warriors are especially challenging as they have no settlements of their own. Instead you must continue to move in hordes throughout the Old World, laying waste to everything in your sight.

One thing does remain common across factions as a prerequisite for each army you build - a Lord at the helm. They not only command forces but prove more than capable warriors in battles themselves, inspiring their kind and keeping a check on troop morale. As they level up, they gain new abilities, special objects and followers. You can even recruit heroes in Warhammer, who are endowed with magical abilities and capable of extraordinary abilities. They can lay waste to a settlement's main building, undermine an army and if playing as Vampire/ Chaos, increase the level of corruption in a province. Heroes can freely roam the map immune to attacks from army units, and can only be assassinated by other capable heroes. You can also embed them into an army to give you special abilities on the battlefield, and help affect a potential negative outcome.

Not that you will care much about their battle powers after a point. The single-player campaign, by our estimates, runs into the tens of hours. While early battles can be quite exciting just to see the troop variety on display, you'll most likely lose your appetite to personally fight battles once you've clocked double-digit hours. Instead, you will prefer to auto-resolve battles and focus on the big picture.

The crux of expanding your civilisation lies in capturing settlements, and then constructing or upgrading buildings to aid in military and economic development. Settlements can be of two types - major ones that go to level 5 or minor ones that max out at level 3 - and that in turn decides the type and number of buildings you're allowed to create in those settlements. For example, some buildings such as Blacksmith and Gunsmith - both part of the Empire faction - are only available after level 3. So it's quite pointless to construct these in a minor settlement because you will never be able to upgrade them to the more advanced versions - such as the Armoury in the case of the Blacksmith, and Foundry/ Engineer's Workshop for the Gunsmith. 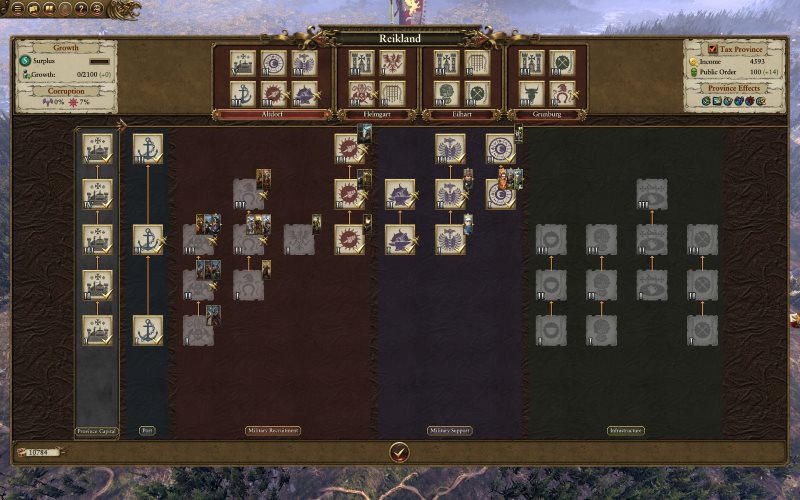 But you don't have to pick a fight with everyone just to expand your influence. Instead, diplomacy can be an efficient tool in banding together to fight the other species, in a recall to the united-we-stand philosophy. That aspect of the game takes on even more importance as you progress past the campaign's midway point, as the Chaos forces start to move south slowly across the Old World. Sworn enemies such as the Empire and the Vampire Counts will agree to join hands to put an end to their invasion, lending a sense of gravitas and purpose to what can oft appear as a story prolonged and peppered with endless bloodthirst.

The other endless facet of Warhammer - thousands of features built upon older features - is due to Total War's 16-year legacy, which throws players into the deep end after showing them a 12-minute tutorial video. As a newcomer, it can be quite daunting to make anything of what you see, let alone be expected to lead your species to victory and glory. For what it's worth, the game does try to help you out by opening a browser window and referring you to an online guide whenever you ask for more information. But too often, even the definitions itself contain terminology that can hinder or turn off new adopters of high strategy games.

And then there are the random events that are either an untold consequence of your actions, or are thrust onto the player to spruce up the proceedings. The latter of those tend to be particularly annoying, as out of no fault of the player, they affect either your settlement's growth rate or the public order.

Where the previous Total War instalments have tried their best to faithfully recreate 15th century Japan or 200 BCE Rome, Warhammer's setting is a love letter to the devotees who painstakingly create miniature figures, infused into a game that combines high strategy and micro-management. Total War: Warhammer can be a tad too demanding or confusing at times - thanks in part to its decade-spanning evolving mechanics - but it still manages to be an engaging experience, albeit a time-consuming one.

After all, war is unending.

We played a review copy of Total War: Warhammer on the PC. The game is available digitally on Steam at Rs. 1,999, and you can pick up a physical copy for Rs. 2,499 from Amazon and Games The Shop from June 7.