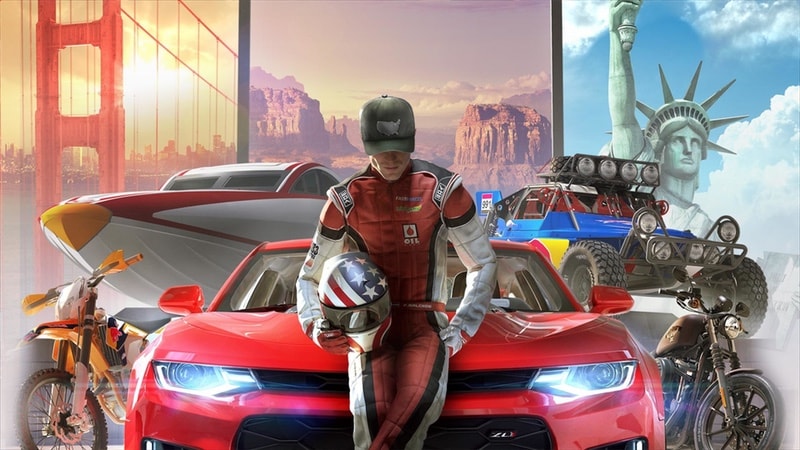 Going in to play the closed beta of The Crew 2 - the sequel to Ubisoft’s over-the-top 2014 racing game The Crew - we were a bit apprehensive. The Crew was mediocre at launch with a terrible driving experience, rubber-banding AI, and cookie cutter missions. Though Ubisoft worked on the game for around a year and fixed most of the issues that bothered us, The Crew should've obviously been much better at launch. With that history, we didn't have high expectations from the Crew 2 closed beta. But if the early signs are any indication, things are completely different this time round.

The closed beta allowed us a chance to play through some of the single-player experience in The Crew 2. The core of the single-player mode is a bit like what we saw with Forza Horizon 3, where you get to select a character and then raise your reputation in the racing scene by winning races and performing stunts. In The Crew 2, progress is linked to your followers in the game. Every time you win a race, perform some dangerous moves such as dodging oncoming traffic, or land moves such as a knife roll while flying, you gain followers.

Everything you do in The Crew 2 has an immediate impact on your follower count and you can see a bar on screen indicating that you gained a certain amount of followers. This is a different approach from Forza Horizon 3’s slightly more passive way of gaining fans. The Crew 2 rewards you instantly for performing crazy drifts or other stunts whereas Forza Horizon 3 rewards you with more fans for hitting speed traps, winning races, and going to other designated areas. Over time, this translates into your reputation rising and that guarantees access to high-level racing events.

The Crew 2 encourages you to do everything for the camera. Following traffic rules in the game won’t get you anywhere, so you’ve got to try your best to break the rules to gain followers. This is easy as you’ve got some really fast vehicles to drive around. The game allows you to quickly switch between vehicles so you can easily go from a car to a plane and just fly over to the neighbouring town. This doesn’t work during races obviously, but it’s fun in the free drive mode.

This is something that allows you a glimpse into the visuals of The Crew 2. We noticed that all vehicles look gorgeous in this game even on the standard PS4, but some of the buildings in the background, the scenery, and even animals in the game don’t look anywhere near as good. At one point we noticed a fox running around in the countryside and it looked like an animal made of plastic. The trees and foliage also don’t look very realistic up close.

The game allows you to zoom out from a close-up of the vehicle to the map view and here again you can easily see that the cars look extremely realistic and so does the landscape when you are flying over it, but every zoom level in between looks quite mediocre. The water effects particularly when you are driving through shallow streams look very unrealistic, which is disappointing.

The controls in The Crew 2 are pretty much the same as its predecessor and there’s nothing major to note in terms of changes. Controls still feel a bit floaty and that’s just something you’ll have to live with if you are playing arcade racing games. In its recent history, Ubisoft’s been known to change a lot of things in its games even after their release so this is an element that could change by the time the final version rolls out.

The game offers quite a lot of racing modes and challenges for you to spend a lot of time in-game. This includes photo ops, hunting hidden billboards, speed traps, and the like. In the time we played these in The Crew 2’s closed beta, we didn’t find much that was amiss and that’s a remarkable level of stability overall. You can access all of these via the menu as the game allows you to fast travel between any two points of the map, which is a big time saver as the in-game world is huge.

There was one issue that did annoy us a lot when we played The Crew 2 closed beta. You can ram into certain objects such as fences and lampposts and break them, but there are others that are immovable such as concrete pillars and some park benches. The latter is a particularly puzzling inclusion because if your vehicle can smash a lamppost, then surely it can smash a bench, but the game doesn’t appear to think so.

Whatever we’ve seen in the closed beta so far highlights a relatively stable game with surprisingly few performance issues a month ahead of launch. In many other games, the beta version is quite threadbare and needs a lot of fixing ahead of the launch. The Crew 2 is not like those games. What we’ve got feels like a game that’s almost ready for release and there’s so much to do even in the closed beta. However, the visuals (aside from vehicles) leave a lot to be desired.

Keep in mind that the game is still a month away from launch, some of this could change. However, with such little time to go before The Crew 2’s release on June 29, we aren’t expecting visuals to improve drastically, though it will be interesting to see how it looks on iterative consoles like the PS4 Pro and Xbox One X or a powerful enough PC.