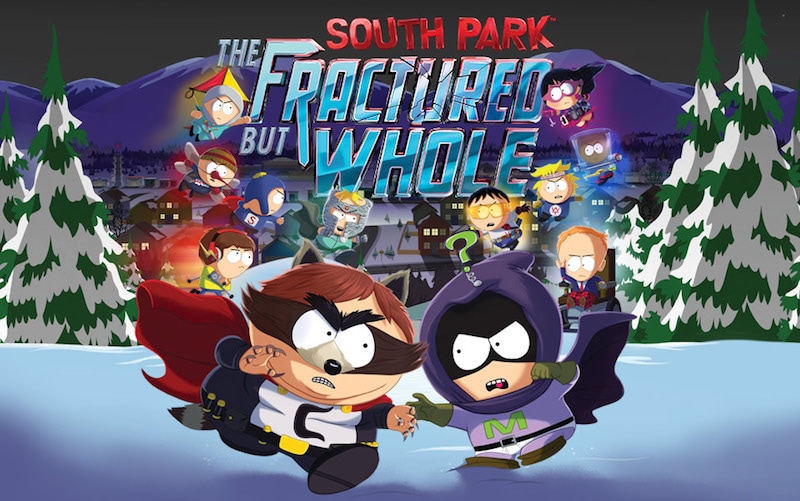 South Park: The Fractured But Whole is what happens when adult animated TV series South Park decides to parody superhero movies in a video game. The result is very derivative, and a whole lot of fun.

Where 2014's South Park: The Stick of Truth liberally borrowed from Lord of the Rings and Game of Thrones, South Park: The Fractured But Whole derives inspiration from DC and Marvel, and the entire trend having a cinematic universe spun around them too. In place of the Avengers you have Coon and Friends, led by popular South Park character Eric Cartman as the titular Coon, with Mysterion aka Kenny McCormick leading the Freedom Pals - South Park's version of the Justice League. Both factions are competing for their own Netflix series. In order to do so, they set out to find a lost cat and use the cash reward from rescuing it to further their respective franchises.

Amidst all of this, you don the role of The New Kid. You'll customise your character with a host of powers such as freezing enemies, or spouting fireballs, as well as forge your own origin story, which then plays out at regular intervals as the game progresses. In addition to this, you'll take selfies, gain followers, and get to know the citizens South Park while uncovering a conspiracy that seeks to unite all the crime families in town.

Along the way, there will be combat. You and three other characters square off against an assortment of foes ranging from police officers to the series' crazy crab people. Like the previous game, battles are turn-based, though there's an added element of strategy. Much like XCOM, and Ubisoft's own Mario+Rabbids: Kingdom Battle, you can move during your turn. This allows you to evade attacks and set up your squad to surround enemies to do greater damage. More importantly, this allows for knock back - hitting your foes into each other and moving them away from you - which gives you the edge in battle. With a well-timed button press you can negate some of the hits of your opponents and paying attention to their insults allows you a free attack. You can even use your flatulence to make them lose a turn, or pause battle, among other things.

As the game's name would suggest South Park: The Fractured But Whole lets you use your gases to bend the fabric of time itself. This is useful in solving puzzles, exploring previously cordoned off parts of the game world (such as getting to hard to reach rooftops by propelling yourself upwards with a move known as Fartkour), or simply getting through battles as mentioned above.

Customisation plays a larger role this time around too. As you progress, you'll gain Artifact slots. These let you increase your attributes such as the number of moves you can make in combat, the amount of health you possess and so on. Also, Artifacts increase your Might - this is a measure of your power and indicates how difficult battles - will be in any given mission. Thankfully, you'll gain a wealth of items as you play, which you can sell for more powerful Artifacts, or they can be used to craft Artifacts when needed. You can also modify your character's DNA to better suit your play style, with tweaks such as amping up spell casting abilities or healing powers with loot from battle. All of this gives you a character that is unique to you.

The loop of combat, puzzles, and exploration works well. South Park: The Fractured But Whole never feels like a grind, even when you're doing something as banal as taking selfies to raise your profile. That's because South Park itself is replete with intriguing characters, secrets to uncover, and of course humour that's been the series' trademark since it first aired in 1997. Throw in cameos galore and a plot that's filled with twists and turns that fans of the show have come to expect, and The Fractured But Whole plays out just like an extended episode South Park episode.

What this also means is that if you haven't watched South Park, you won't get some of its references, such as the joke behind Towlie, a talking towel owning a marijuana dispensary, or being prompted to hit a foe when a “micro-aggression” is uttered. That's not to say newbies will be completely lost, but series faithful stand to gain the most from South Park: The Fractured But Whole than others.

That aside, there are some niggles that impact the overall experience. We noticed some slowdown in battles on our Xbox One S, and given the importance of correct timing for button presses, this was a concern. It wasn't a major deal breaker, but happened enough to make us take notice. Restarting the game fixed this. For most part, barring a single loading screen at the beginning, the world of South Park: The Fractured But Whole is a relatively seamless experience. This makes the presence of a loading screen while entering a kitchen in a house seem odd and out of place. It appears that the choice of engine - Snow Drop (which also powers The Division) has some teething issues. Hopefully there's a permanent fix for these when the game is out.

Minor technical issues aside, the stellar combat, engaging narrative, and quirky humour make this 30 hour romp through the quiet mountain town of South Park, Colorado, worth checking out. Particularly if the TV show's brand of humour gels with you. It's a marked improvement over South Park: The Stick of Truth in almost every way. Role-playing games have had a bumper year with Persona 5, Battle Chasers: Nightwar, Horizon Zero Dawn, Nier: Automata, and Final Fantasy XII: The Zodiac Age, and South Park: The Fractured But Whole continues the trend in spectacular fashion.

South Park: The Fractured but Whole