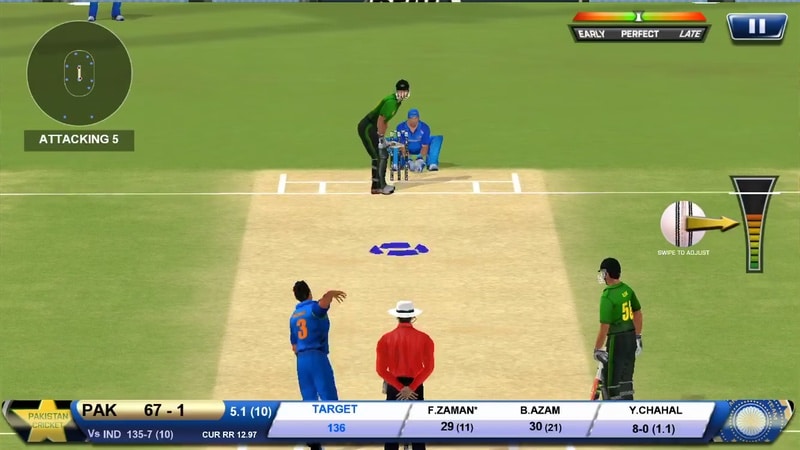 There’s no dearth of cricket games, but good games certainly are hard to come by. Our list of the best cricket games of 2017 wasn’t very long and Real Cricket 17 was an honourable mention. Indian developer Nautilus Games’ premier cricket game now is Real Cricket 18 and we decided to play the game to find out if it’s better than its predecessor.

Nautilus seems to have tried to make Real Cricket 18 look and feel a lot like a live TV broadcast of a cricket match. Each game begins with an aerial shot of the city as the camera literally flies into the stadium. Everything from the toss to the action replays look a lot more like TV broadcasts, and there’s even a pre- and mid-game show where so-called experts offer their thoughts on the game.

While the intention definitely is to recreate a high-quality TV broadcast, the result is anything but that. Real Cricket 18’s visuals are just too low-quality for the opening shot to look good. It looks more like a game from the 90s with blocky buildings and vehicles as the camera moves in to the stadium.

We can excuse certain elements like the people in the stadium literally looking like cardboard cut-outs, but we can’t see why the developer would add a pre-match show where the presenters make some rather generic comments. The show doesn’t add anything to Real Cricket 18 as the experts’ comments don’t mention player names or anything specific about the game.

Once you start a match, Real Cricket 18 becomes the game you always knew Real Cricket 17 to be. The gameplay is solid and a new swipe-based control scheme makes it easy for beginners to bat and bowl. The classic on-screen button based simulation controls are still there in the game for purists, but we prefer swiping to play shots as it feels better on smartphones. Batting and bowling both feel equally balanced in terms of difficulty. There’s a button on screen for you to play lofted shots, but otherwise all batting is controlled via swipes.

The gameplay is quite enjoyable overall. We usually don’t like bowling in mobile cricket games, but Real Cricket 18 makes it a little less tedious thanks to its variety. There are a wide variety of bowlers whose actions are well rendered even if each type of bowler only has one generic action. The game has many different types of deliveries such as off-cutter, drifter, and flipper, and the animations for each of these is quite realistic. This made us bowl a lot more than usual in this game.

You can also customise the field and bowl accordingly, a strategy that works reasonably well if you are able to execute it. Taking wickets is not easy but it is possible to cut down the flow of runs and force batsmen into making mistakes. We enjoyed batting as well as there’s enough of a variety of shots available for you to choose from.

The fielding AI is pretty average though, and we felt that bowlers could field better off their own bowling. Many times the bowler let the ball run past him to a another fielder when he could’ve easily fielded it. We noticed similar goof-ups with other fielders too as it felt like the game was following a pre-written script from the moment you play a shot as opposed to having reactive fielding.

Nautilus’ bid to recreate a broadcast experience does have some shortcomings too. We felt that after a batsman hits a shot, the game moves in slow motion. We kept wishing for game speed to be a tad bit higher. It would rob Real Cricket 18 of some of its better cinematic moments such as the ball sailing out of the stadium for six runs, but we’d enjoy the game a bit more too.

We also didn’t like the commentary at all. This game has English and Hindi commentary, but the audio quality is very poor. We could hear a hiss many times when the commentator was speaking. We noticed this a lot when we played the game while wearing headphones. If you play without headphones, you're less likely to notice it.

Real Cricket 18 is a free-to-play game and Nautilus has added a subscription component to in-app purchases. You can pay Rs. 49 per month to Rs. 219 per month for various benefits such as no ads, unlocking all tournaments, and the ability to play two- and five-over matches. The subscription is optional and you can buy in-game currency — tickets — for real money too. It costs Rs. 79 for 5 tickets and Rs. 799 for 100. Other in-app purchases let you unlock equipment, get rid of ads, and unlock everything for up to Rs. 1,949.

The monetisation in Real Cricket 18 isn’t overly aggressive, which is a good thing. We saw an ad every five overs and between the innings. However, not allowing people to play two- and five-over matches without reaching levels five and four respectively feels like a bit of a money-grab (as you can unlock that by paying real money). The in-game currency is tickets and you can either buy these with real money or in-game coins (2,400 coins per ticket). You need tickets to unlock more tournaments and progress through to the game’s final tournament — the World Cup.

We think the system is not overly difficult, but it slows down progress enough to make you consider paying. If you want to play on the hard or expert difficulty modes, you will have to upgrade player skills, which can be done by paying with tickets. We’re not big fans of this kind of a monetisation system but it’s the price you pay in most free-to-play mobile games.

Overall, Real Cricket 18 is a decent game but we think World Cricket Championship 2 is the better game overall. The latter has much better commentary, great gameplay, and features all formats of cricket in one game. That said, Real Cricket 18 is worth checking out but it needs to up its game to take on the best in the business.

Real Cricket 18 is available as a free download on Android and iOS.