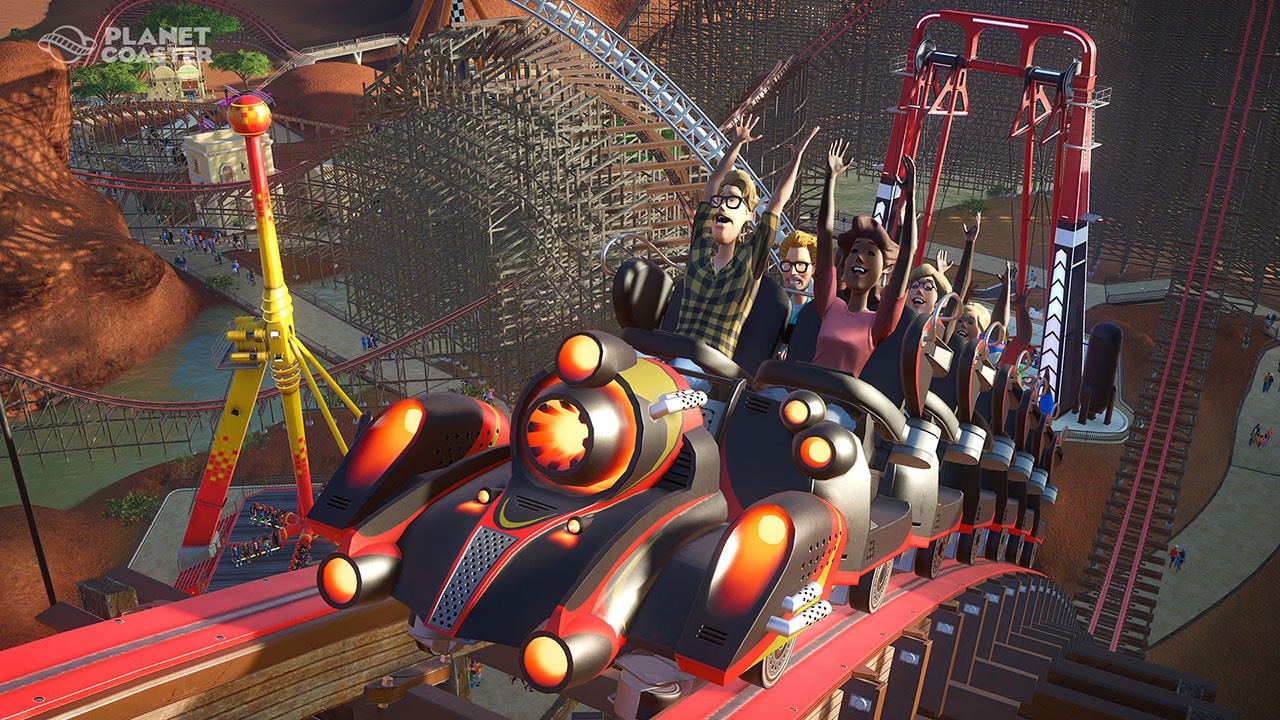 If you've spent any amount of time with 2004's RollerCoaster Tycoon 3, you'll feel right at home with Planet Coaster – a new theme park construction and management game released last week – built by the same people, Frontier Developments. The game shares much of Roller Coaster Tycoon 3's DNA, which is not surprising considering that game has sold over 10 million copies since launch. Unfortunately that also means sticking to some design decisions around micromanagement that started more than a decade ago, and seem out of place today.

Planet Coaster is a cheery game – with cartoony animations, bright colours, and a pop instrumental soundtrack that is a nice mix of happy-go-lucky and inspiring. The first thing you do in the game involves creating an avatar, and placing them anywhere on the globe. You can then look at parks and worlds created by other people in the Steam Workshop community, and they can look at what you're making. This has been available since the game's beta days, and hence provides way more content than Planet Coaster itself ships with.

There are three ways to play in Planet Coaster – Career, Sandbox, and Challenge. Career involves a pre-determined set of existing parks that unlock as your in-game level rises – the first available theme is Pirate, and then moves onto Fantasy, Sci-Fi, and “Planet Coaster” in further locked levels. In all the Career mode scenarios, you're given a half-finished park and three sets of objectives of varying difficulty. These include growing the park's audience to a certain level, raking in a specific profit, or constructing more rides.

The more objectives you can tick off, the faster you get access to advanced campaigns. You can continue expanding any of the parks once your objectives are complete. Career levels serve as a nice tutorial to the game, but not much else. The demands tend to be pretty basic, and with the park half-built, there's never enough freedom for you to explore on your own. There is an actual tutorial section as well, but all it does is open a browser window in-game and point to Planet Coaster's YouTube channel. If anything, it's the best example of how not to design tutorials.

Sandbox, the second of the three available options, offers exactly what its name suggests – a completely free open-world for the payer to explore, with an unlimited budget to boot, and no limitation on what you can build, or when you can build it. If you're looking to be challenged, Sandbox can feel sluggish and confusing, more so for newcomers. Despite its allure and freedom, it's also not the best way to come to grips with the game, as being handed the keys to the entire kingdom can be daunting when you've no idea how to proceed.

That leaves Challenge, which strikes the right balance in providing a genuine sense of control while being realistic with the bottom line, i.e. the budget. When you begin a new game in Challenge mode, you'll be given some objectives – or challenges – to hit. These might involve building a coaster that reaches a certain speed, or a ride that hits a specific value on the Excitement scale (all rides are judged on three metrics: Excitement, Fear, and Nausea).

Once you complete a challenge, you can claim a monetary reward. New challenges will pop up as your park expands, and your success is completely dependent on maintaining a good cash flow that allows you to add more rides. A frequent complaint from visitors in the beginning will be the lack of things to do in the park. But manage that well, and you'll be raking cash in. It's nowhere near as simple as that sounds, though.

Planet Coaster has many dozens of things to do and manage, and you'll have to juggle them all to ensure success. The profitability of any coaster depends on how you decorate it, what the game calls Queue Scenery Rating. Any new ride starts with a single-digit value, and it's up to you to dress it the way you like. You can choose from hundreds of props – be it just a barrel planter for $4, or something as elaborate as a sleeping dragon for $260. The more expensive, huge and sophisticated the “object”, the more it adds to your Scenery rating – in turn, keeping customers happy while they wait in queues.

Your park guests have a list of needs too. These include happiness, energy, hunger, thirst, toilet, and nausea. Happiness is affected by the cost of the rides, and the length of the queue, which in turn is affected by the duration of a coaster. Hunger and thirst can be managed by setting up food and drink stalls, while toilet needs toilet stalls, as you may expect. The last of these – nausea – is linked to the aforementioned ride metric, and people will get sick if your park tilts towards a thrill seeker spirit, versus a family friendly vibe.

Other concerns include Research, and Marketing. While Sandbox lets you build any coaster from day 1, you'll have to “research” in the two other game modes to unlock not just rides (coaster, track, family, or thrill) but shops (food, drink or merchandise) first aid facilities, ATMs, and information booths – the last of which allows you to enable Priority Pass, and earn from park visitors who wish to skip queues. Marketing does exactly what it sounds, helping you bring in more visitors which is crucial to growth. There are three types of it in Planet Coaster, from print ads, TV commercials, and online campaigns.

That leaves Staff, and Attractions & Shops. Any sustainable park needs staff to manage it, be it keeping it litter-free, maintaining and fixing rides, vendors at food and drink stalls, and even entertainers to keep spirits high around the park. You've options for all of that under staff, from hiring new ones to keeping a check on their happiness levels. Attractions & Shops lists everything you construct in your park, in three different panes marked Attractions, Shops, and Facilities. Each item in these lists shows you the status – whether it's open, testing or broken down – the number of monthly customers, when that specific thing opened to the public, and the last month's profit. That way, you can quickly figure out which of your rides and shops are worth keeping, or ought to be discarded.

Planet Coaster has all kinds of detail even beyond this – you can click on any single guest, and see what they are doing, think about your park, their needs are, and how much cash they have spent since entering your park. Sure it can feel a bit intrusive, like an advanced all-encompassing surveillance system, but it's comforting to see happy-green smileys on their info cards, and know they're enjoying themselves.

Even your rides share this extensive detailing and customisation. While you're free to choose from existing blueprints for coasters, you can then dig in and set up “triggers” for the length of a ride. This could mean a water jet or a pyrotechnics display going off as a car rolls by, which contributes to the ride metric in some manner. You can also go in and build a ride from scratch if you like, which is what enamours veteran coaster gamers. The controls and tools therein are intuitive and self-explanatory, and so even if you don't know what you're supposed to be doing, you can construct a basic ride in a couple of minutes. Moreover, Frontier has provided a Steam Workshop module at the game's opening screen, so you can browse through other people's collection and download ones that you like. It's sort of like having DLC for a game without any waiting on the developer.

Planet Coaster's problems aren't with its creation side, but on the management front. When queues get too long, visitors will complain – and these tend to be the most prominent ones in the “Top Guest Thoughts” column. You can add to the Scenery, and bring in Entertainers to help solve that, but even though we had 70+ per cent values, and multiple entertainers, people still remained unhappy and the game never made it clear how we could be doing better.

With things like Staff, and Attractions & Shops, it seems Frontier didn't put much thinking into designing it, as you're forced to micro-manage every single individual and item. Wish to change everyone's salaries? Choose Park Management, head to Staff, click on the location marker, head to the Employment tab on the pop-up card, and then tweak the value. Want to change the price of a certain food item across the park? Run through more of the same, and visit every food stall you've in the park. It's one-two clicks too many for something so menial, and shows how poorly designed the entire management system is.

If that's the side of theme park simulation you're interested in, you'll be left frustrated and disappointed. But if what you want is to plonk down a bunch of rides, be creative with your layouts and create a happy mini-universe for guests and yourself (you can go on the rides too, in first-person view), which brings out and caters to your imagineering side, then Planet Coaster is the game for you.

We played a review copy of Planet Coaster on the PC. The game is available via Steam at Rs. 2,970.

HTC 10 evo to Launch in India in Late December, Company Confirms
Is PS4 Pro the Hardware Upgrade the PS4 Needs?