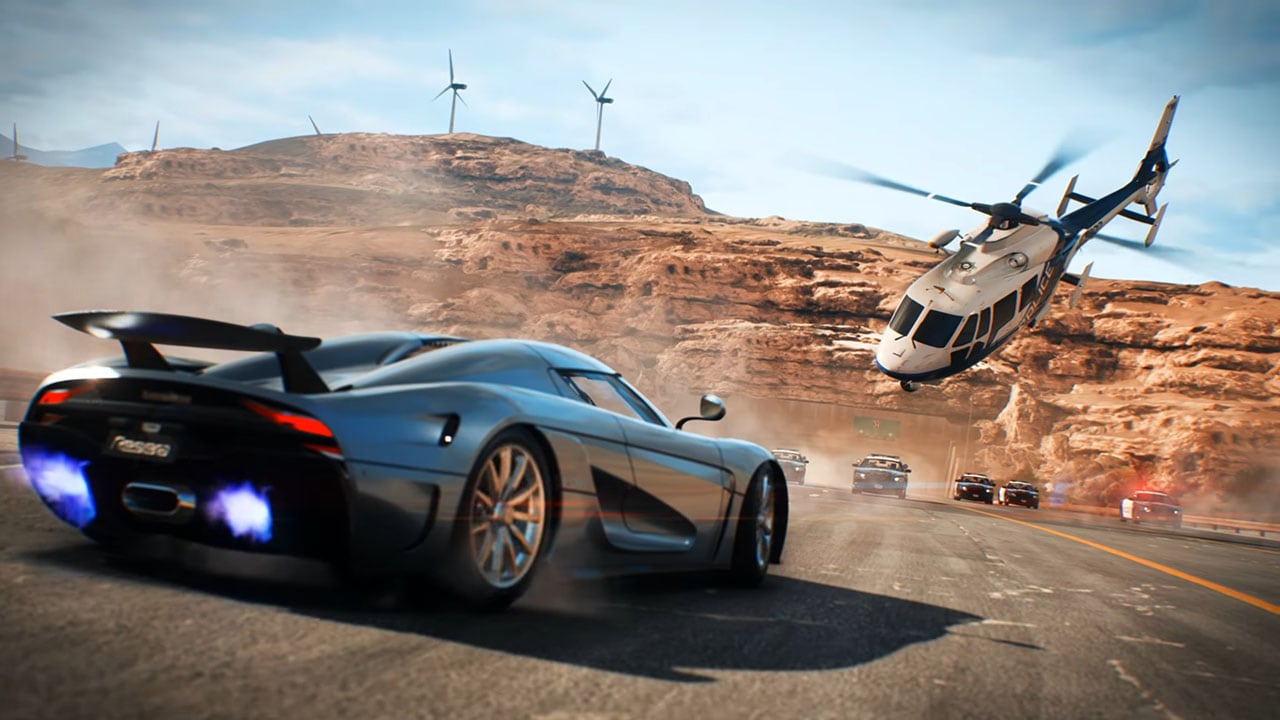 The next Need for Speed game – NFS Payback – from Swedish studio Ghost Games is almost here, with worldwide launch slated for Friday, November 10. But as with other titles, EA is providing early access to its dedicated users: those with EA Access on Xbox One and Origin Access on PC. NFS Payback has been out since Thursday for subscribers of those two services, and it's coming to Deluxe Edition pre-orders on Tuesday, November 7.

Developed with Frostbite 3, the latest NFS takes a story-based approach just like its predecessor, though the cut-scenes aren't live-action. It follows three main characters – Tyler Morgan, Sean McAlister, and Jessica Miller – as they go up against The House, the ruling underworld cartel of Fortune Valley, which is directly inspired by Las Vegas and the surrounding Nevada desert. One of the game's villains, Lina Navarro, is played by The Expanse actor Dominique Tipper.

Each of those racers has a unique set of skills, which come in handy for Fast and Furious-type action set-pieces that dictate NFS Payback's single-player campaign. You'll be running from cops and cartel enforcers, while impressing other racers for a spot in the ultimate event. And in what comes as a relief, you can play it offline without an Internet connection unlike the 2015 reboot.

That's enough about the game. Let's get down to how NFS Payback performs on PC, covering what you'll need and what you can expect.

Minimum requirements (for 720p at 30fps with Low preset):

Recommended requirements (for 1080p at 60fps with High preset):

Beyond that, you'll need 30GB free hard drive space to install the game. There's no physical release for NFS Payback given EA's standing policy, so you're looking at a download size of 24.5GB.

Here's what we tested on:

NFS Payback PC graphic drivers
Before you start playing the new NFS, get Nvidia's GeForce Game Ready Driver 388.13, released on October 30, which Nvidia says is optimised for Need for Speed Payback. It should help you get slightly better framerates and quality from your graphics card. Unfortunately, Payback isn't part of Nvidia's supported titles list yet, so you won't see it show up on the GeForce Experience home page.

NFS Payback PC graphic settings
Thankfully, Ghost Games has built in an Auto graphic setting option inside Payback, so you don't have to do trial and error to figure out what works best with your PC rig. If you do find yourself wishing to tweak things manually, you'll be presented with a dozen choices to boot: Texture Quality, Texture Filtering, Post Process Quality, Shadow Quality, Ambient Occlusion, Effects Detail, Geometry Detail, Anti-Aliasing, Terrain Quality, and Vegetation Detail.

Payback also seems to support every kind of resolution under the sun, and it's also got support for Nvidia's Dynamic Super Resolution (DSR), which lets you boost image quality by rendering the game at a higher resolution than your screen's native one, and then downscaling it for higher fidelity. This came in important during our testing.

For the most part, NFS Payback ran smoothly on our test system, outputting well over 75fps at our native screen resolution of 1920x1200 with Ultra detail setting. That made sense, given our PC was slightly above the recommended spec from EA.

That said, there was noticeable micro-stuttering during high action sequences, or when the games switches between its rendered in real-time cut-scenes and handing control back to the player. It wouldn't affect the race in any way, but it does impact the experience. There were no issues during long stretches of open world racing, for what it's worth.

We figured we would push things further with Nvidia's DSR feature. Pushing the resolution to near-4K, the frame-rate was knocked down to an unplayable 25fps, so we had to bring down the graphics quality to the Low preset to eke out a playable 35-40fps.

Things were much better on the 2x DSR factor front – i.e. resolution of 2715x1697 – where we were able to get near 60fps on High detail preset. This shows that Payback is well-optimised for the most part, considering a slightly-above recommended rig was able to punch much higher than EA's official word.

NFS Payback PC graphics quality
Even on its Ultra preset, Payback doesn't have the level of detail that we've seen in other racing games, including Forza 7 and Forza Horizon 3. Though the cars look realistic, replete with body damage, reflections and lens flares, they're not as impressive as the aforementioned Microsoft titles. The colours don't have the same pop, although some of that is down to Ghost Games' choice of being more realistic.

Video game photography enthusiasts will be disappointed to know there's no Nvidia Ansel support for NFS Payback, though you can bring up an in-game snapshot mode that pauses the game, hides away the GUI clutter, and lets you move the camera as you desire. You can even apply Instagram-style filters, and play with various camera settings to create as many wallpapers as you wish.

The Payback snapshot feature is another aspect where Nvidia's DSR helps, as you don't need a 4K screen to create a 4K screenshot.

NFS Payback PC controls
Though EA recommends you use a controller with NFS Payback, keyboard support is provided too on the PC version. The keyboard controls work well without any hassle, and you can easily rebind any keys that don't suit your playstyle. One thing that bothered us was that the pause button – to bring up the in-game menu – is Tab by default instead of Esc.

Another problem with the menu is that the mouse is not available as input, so navigating the settings screen can be a chore on the keyboard, more so with the lack of any visual cues to switch screens.

NFS Payback PC multiplayer
These are still early days, given the game isn't even out till November 10. But from the little time we spent with multiplayer on PC, NFS Payback didn't give us any issues with matchmaking. NFS has suffered a big drop in quality with recent iterations, but it seems the community is still going strong. The quality of races will of course depend on how stable your Internet connection: the ping, packet loss etc.

Should you buy NFS Payback on PC?
For racing fans with PC being their only platform of choice, a new NFS title is an enticing prospect. More so given how Forza 7 is inundated with pestering micro-transactions. We'll have a full review out soon, but if you've been looking for a new arcade racer, Payback is worth a shot. That's assuming you've already finished Forza Horizon 3, which is better on every front.

The asking price of Rs. 3,499 can be quite a deterrent, so the best way to figure out is to get on Origin Access for Rs. 315 a month, and use the 10 hours it gives you to make your decision. If you do end up buying it, you'll get 10 percent off on your purchase.

Of course, if multiplayer matters more to you, consider the fact that racing games tend to have a bigger install base on PS4 and Xbox One. And given the lack of cross-play, you might be better off opting for consoles.