NBA Playgrounds Review: A Passing Imitation of Its Spiritual Predecessors 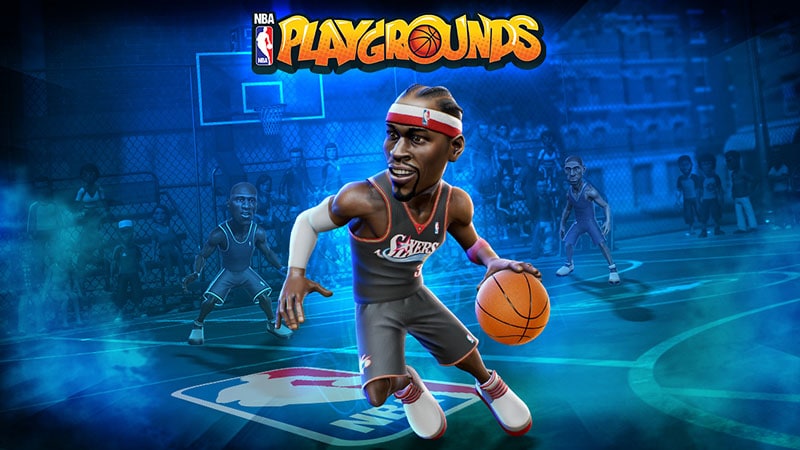 The pitch for NBA Playgrounds is simple: if you're a fan of arcade basketball games, such as NBA Jam and NBA Street, then this is right up your alley. It's got cartoonish aesthetics, with player caricatures, and a love for crazy animations, plus access to over 150 athletes from 30 NBA teams, and the intelligence to capitalise on basketball fever by releasing smack-dab in the middle of the annual NBA play-off season.

There are a total of three game modes in NBA Playgrounds, but they all have the same basic setup: two-on-two pick-up games. You start with Exhibition, which lets you play against AI or another human, and is meant to serve as a training ground of sorts. Then there's Tournament, which only allows for player-vs-AI matches on six courts around the world, styled after different cities in New York, London, Paris, Tokyo, Las Vegas, and Shanghai. If you make it through all four rounds, you'll unlock a new court, and new players.

The last NBA Playgrounds mode is Online Match, which is essentially Exhibition, but online. It doesn't support two controllers on the same computer currently, so you can't have two-on-two matches just yet. There are also no online tournaments currently, though developer Saber Interactive has said that both those features will turn in future updates, starting with the former.

The controls in NBA Playgrounds are straight-forward, as you'd expect. There are buttons to pass, shoot, alley-oop, steal, block, and in a departure from real-world basketball, for elbowing and shoving people. When you start your first Exhibition match, Playgrounds will introduce the controls, though it never coaches you in how to make the best of them. Even though it's an arcade title, timing your shot is very important in Playgrounds.

This means that playing NBA Playgrounds for the first hour or so, we ended up missing half of our shots, as a slightly early or late release would cause the ball to bounce out of the basket. At the same time, the game also rewards perfect shots with an extra point or two, which can mean a huge difference in scoring even if you get a few shots wrong, since the AI tends to be spot on. And because the game shifts into slow-motion for added effect during big dunks, you're not too sure of when to let go of the button. Once you get the hang of it, there's a genuine sense of fun in landing a jumper or a dunk, though the lack of visible indicators makes it tough to get a clear read on things.

But that's not the only trouble with NBA Playgrounds. For one, the alley-oop system feels either broken, or half-baked. Your AI team-mate doesn't always react when you hold down the trigger, or goes for it a tad too late, by when the shot-clock has usually run down, or the ball has been stolen from you. It can make for a frustrating experience, more so online, though it makes for a treat when things do come together.

Both sides in Playgrounds have their own special power meter, which fills up as you pull off flashy moves, be it crazy dunks, alley-oops, steals, or a super block. When the meter becomes full, you're assigned a “lottery pick”, as the game calls it, which is essentially a power-up. It could give you a guaranteed shot, an always-full stamina bar, extra points for dunks, or court zones that double, triple or quadruple your shot score.

As exciting as it is to earn and use a “lottery pick”, it can be equally as annoying to have one used against you. The problem is that not all power-ups are equal, and the randomisation aspect can upend score lines with luck, especially in late-game scenarios. Its bigger failure, though, is in not explaining how most of these game mechanics work, since building your meter can be so vital. Playgrounds never bothers to tell you what affects your power-up meter, and that shoving your opponents in fact will cause it to take a massive hit.

Equally egregious is how it slows down the game after scoring. Instead of letting the opposing team resume play quickly and try for a break, they are forced to wait for the scoring ones to vacate the defending half. Comically, half of it takes place off-screen, so you're not allowed to pass or even move your players until a whistle sounds. For an otherwise fast game taking place on a small court, it's a baffling decision on part of the developers of NBA Playgrounds.

In terms of player roster, Playgrounds feels quite extensive. You start off with half a dozen players, and unlock more every time you level up. Players come in the form of packs, with each containing five, and there are variations to them – with some standard, some ‘Epic' and others ‘Legend' – that pushes you to keep playing, and land favourites such as Steph Curry, Allen Iverson, and Shaquille O'Neal. As in the real world, each player is good at different things - be it three-pointers, dunking, blocking, and so forth - which plays a part in forming your pair on the court.

The players you use also level up as you play more games with them – going from ‘bronze' to ‘gold' – which hands them new animations in turn. While this doesn't affect their skill level, Playgrounds' online ranking system doesn't factor in what players you're getting to court – with the entire focus on a score driven by your online exploits – so there's every chance you'll end up with two 'bronze' players against a 'Legend' like Dirt Nowitzki, only because your opponent spent longer playing offline. This can lead to some badly mismatched games, even when both players are at the same skill level, and it's something Saber should really work on.

At launch, NBA Playgrounds' online mode is restricted to random match-making too, which means you can't play with friends unless they are sitting next to you. The game's Nintendo Switch version doesn't even have online play, though it's expected to receive that update in “a few days”. With a small user-base, it also took us a while to find games online, though that will likely get better over time.

Improvements are needed elsewhere, too. Long loading times (more than half a minute) before every new game are frustrating, and a lack of variety in general – NBA Playgrounds' tournament mode feels monotonous after the first one – combined with repetitive music and commentary from the two announcers, Ian Eagle and EJ Johnson, with the same corny jokes and one-liners over and over, drains any promise of Playgrounds offering long-term excitement.

Although there are pieces of a good arcade basketball game here, it lacks polish, and seems to have been rushed out the door. Playgrounds is inherently fun because it lets you play out outrageous dunks, but it just doesn't do enough to stand up to the greats of its genre, let alone push the bar in any way.