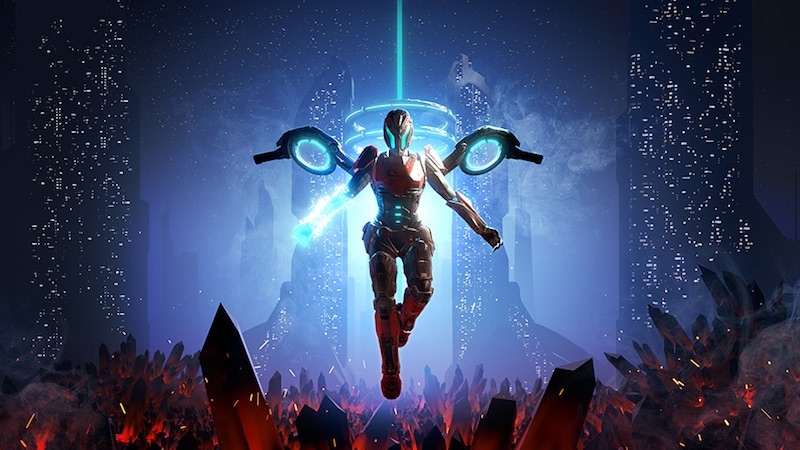 PS4-exclusive Matterfall comes from Housemarque, the studio behind the excellent Alienation and Resogun. Matterfall borrows the same elements that made Housemarque's previous games stand out - a catchy techno soundtrack, sci-fi feel, and a design that encourages you to chase high scores.

Unlike Housemarque's earlier titles, Matterfall is a side-scrolling shooter with platforming elements. Set in a futuristic world with a city besieged by aliens, you play the game as Avalon Darrow, a for hire mercenary who is tasked with cleaning up the mess.

Along the way you'll jump, dodge, shield yourself, and blast an assortment of foes. The game has a somewhat unusual control scheme that takes a little getting used to - you use the R1 shoulder button to jump, and the right analogue stick to shoot. It takes a while to get used to but once you do, you'll realise that this quirky choice is necessary to get you past the game's many devious enemies, as it allows you to shoot and jump at the same time.

Another point to note is Matterfall's Strikes. Performing a Strike allows you dash across chasms, but more importantly, it freezes your foe's bullets in place. It is an interesting mechanic, not too dissimilar to Might No. 9's dash, though the implementation is a lot better. It works well enough whether used to attack or to evade damage.

Coupled with this, you have the ability to create platforms with an energy beam. Mastering this, along with the Strike, is imperative to clearing the game's later levels. More often than not, we found ourselves dashing and firing at enemies all while creating the ground needed to run on, lest we fell to our death.

And then there's a slew of weapons and augmentations like grenades. Depending on your play style, they aid long, as well as close range combat. You don't get them from the beginning though - you'll have to find and rescue civilians to get access to new weapons, with one in each level having an upgrade for you. This gives you an incentive to revisit older maps in order to find weapons that will help you progress.

All of these elements come together to form an experience that's on the tougher side. You're never far from death, though all this is offset by a generous checkpoint system. This dulls the impact of the game's score multiplier that rewards you for not getting hit, and each level's zero gravity sections that can result in your game getting over quickly if you're not careful.

That doesn't matter too much though because in motion, Matterfall is a visual treat. Hordes of enemies, a wealth of explosions, and slick art direction make it standout. Combine that with a solid soundtrack, and there's little to complain about from a production standpoint.

Despite a learning curve in terms of controls and new mechanics, Matterfall can be completed in around four hours. Granted there are higher difficulties and leaderboards to bring you back, but that's it.

On the whole, Matterfall's presentation and gameplay are solid with enough twists to Housemarque's existing formula to make it a fun little distraction. If you're craving for an action-fuelled romp beyond the usual AAA, big budget releases, Matterfall is worth considering.