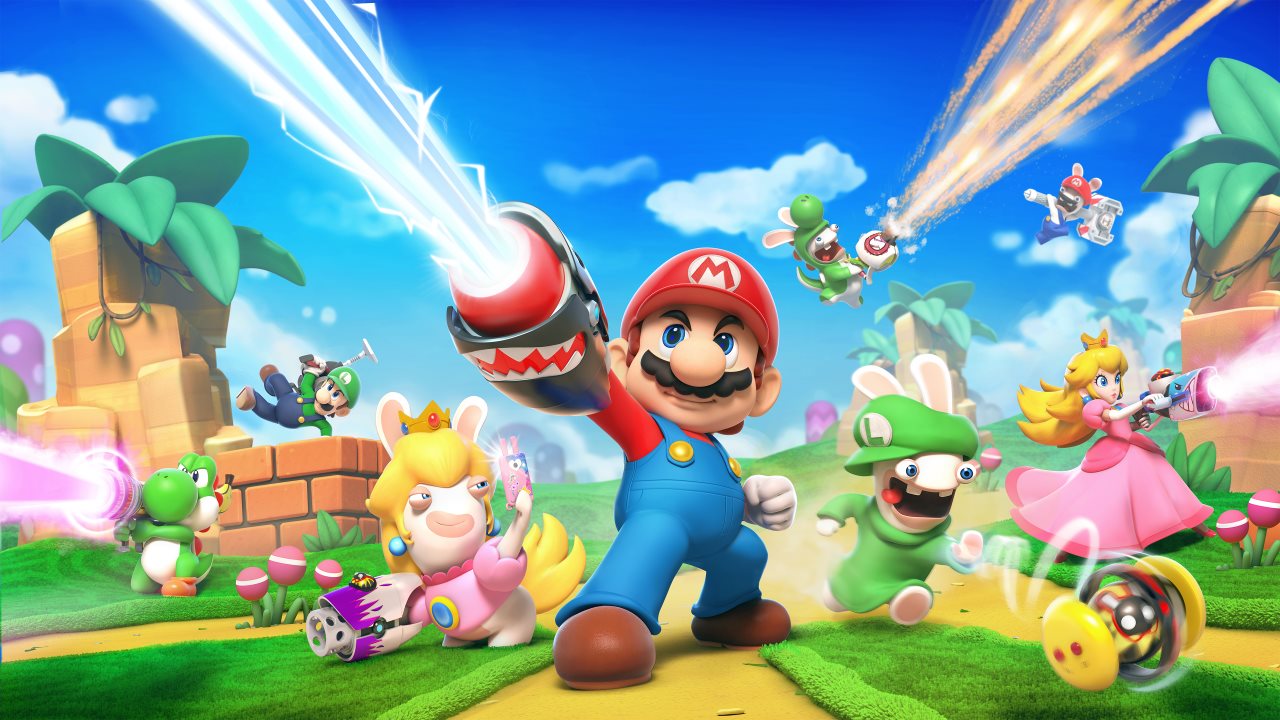 When Mario + Rabbids Kingdom Battle was formally announced by Ubisoft at E3 earlier this year, the natural first reaction for many – including us – was: what are Rabbids? While most people on this planet have heard of Nintendo’s red-and-blue jumper-wearing mascot, Ubisoft’s two-legged rabbits – a spin-off from the Rayman franchise, and who will remind you a bit of the Minions in their mannerisms and antics – are much less known.

And if that wasn’t strange enough, the game would have Rabbids in the likeness of Mario and his friends, including a Princess Peach that is always taking selfies with a smirk on her face, and clapping like an excited toddler at every tiny win. On top of that, it was going to be a turn-based strategy game, replete with the family-friendly characters wielding laser guns. It’s crazy to think Nintendo greenlit this project, and it’s as surprising to find out that it’s a runaway success.

The setup for Mario + Rabbids begins with a short Pixar-like video that shows how the Rabbids accidentally invade the Mushroom Kingdom and wreak havoc with an invention they stole, which can combine any two objects into a weird new creation. They end up combining themselves with everyday objects and Nintendo items, creating some helpful copies of Mario and his friends, alongside an assortment of bad guys.

When the dust settles, most of Mario’s friends have disappeared, leaving him with Rabbid copies of Peach and Luigi, with whom he arrives at Princess Peach’s castle. After they figure out what’s gone wrong thanks to an AI assistant called Beep-O – who serves as the exposition vehicle for the game, and travels with the group – they set out to restore order to the Mushroom Kingdom. Your band is always a trio, and as you complete new levels, you will unlock a total of eight characters to choose from.

Mario + Rabbids is split into four different worlds: Ancient Gardens, Sherbet Desert, Spooky Trails, and Lava Pit. Each of those worlds has 10 levels (or less in some cases) in total, plus a final level that focuses on a boss fight. Mostly, you’ll be tasked with defeating all the enemies present on the battlefield, while sometimes you’ll be asked to reach a specific exit spot, or ferry a hapless character across the level. Since the game’s combat is turn-based, it’s like a mixture of chess with some heist-like elements, featuring brightly coloured and cheery characters amidst exquisite landscapes with plenty of visual gags.

Ubisoft has also been smart enough to reuse Mario sound effects and musical cues, bringing in an added nostalgia effect. You’ll hear the same chime when you collect coins in Mario + Rabbids that you’ve come to known from Nintendo’s own Mario titles. Unfortunately, there isn’t enough variety on hand even with the different worlds, and you’ll likely get bored of the few soundtracks that play on loop.

Levelling up
As with any other RPG, your characters in Mario + Rabbids gain new powers over time, to deal with newer and greater threats. New abilities and weapons are gained via skill points and coins respectively, and a reset option for the former lets you tweak characters without ever feeling like you might have chosen the wrong ability. While skill points are earned via orbs you collect during your travels in the Mushroom Kingdom, coins can be found on and off the beaten path, and depending on how you perform in the levels. Moreover, once you finish all the levels, they turn into challenge levels with specific goals, and can help you earn extra orbs and coins to further level up your hero.

Your assistant Beep-O has abilities of its own, and can interact with the world outside levels, to help get you access to three levels of treasure chests: bronze, silver, and gold. Finding and unlocking these is a puzzle game in itself, and it serves as a nice break between the combat-based levels. Those chests contain a variety of items, including new weapons, artwork, soundtracks, character 3D models, and tarots.

Some of these are intentionally locked away behind abilities you don’t have in the first playthrough, and that’s because Mario + Rabbids wants you to revisit worlds that you pass through. Beep-O’s new abilities are only unlocked after an entire world is completed, so you’ll need to go back to earn all collectibles. This feels unnecessary as you’ll be traversing through areas you’ve covered in the past, but the presence of challenge levels helps cut down on the rote feeling.

One of the big problems with RPGs is the presence of grind, which requires to repeat the same tasks over and over to level up your characters, to keep pace with the rising difficultly slope of the game. Mario + Rabbids is well-designed during the early hours, as we could complete the first two worlds without having to revisit an earlier one. But there’s a sudden step up in difficulty starting with the third world, owing to which you’ll be forced to return to former worlds.

Power through
As for the levels themselves, each battlefield is split into a grid structure, with characters able to move a certain number of squares. Their weapons too are limited by range, depending on whether it’s melee, ranged, or homing. During your turn in Mario + Rabbids, you can perform a total of three activities: movement, attack, and a super effect.

Players can increase the movement of their characters by using their allies to create a team jump, which allows them to reach previously inaccessible areas on the battlefield, or climb to higher areas for a vantage point. Mario can use his jumping ability to stomp on enemies, which becomes another arsenal in your fight. If the enemies are in range, characters can also “dash” into them by moving, further decreasing their life. Certain characters, such as Rabbid Peach or Rabbid Yoshi, are capable of multiple dashes thanks to their skill tree.

Early weapons are usually laser guns that deal a direct hit on the enemy, with the likes of rocket launchers, area-damage blasters, and motion-activated bombs becoming available later. Mario + Rabbids utilises a simple cover system for players and enemies to protect themselves, giving weapons a 100, 50, or zero percent chance of success. But that doesn’t mean you can hide behind cover forever, with the material – brick, ice, or metal – defining its durability.

Flanking your opponent will usually be your main task during levels, though you can also target the cover itself to induce certain effects. Some cover that provides full protection can be deceptive, hiding a fire- or ice- ball underneath. If you expose the covering and then fire on it when a character is adjacent to it, you can land extra damage by doing so, which can also set them on fire or freeze them for the next turn.

These abilities are also governed by the aforementioned super effect. Characters gain these from the skill tree, and they include a myriad of abilities, be it extra damage, reaction shots, healing, adding artificial cover, stealing life, weakening enemy weapons, and even attracting enemies towards you by dancing. The last one is exclusive to Rabbid Mario, for whatever reason. Super effects also come in-built with later weapons, which further adds to the drama on the field.

Mix all those variables with a total of eight characters, and you have a very competent and complex RPG with seemingly endless combinations. Don’t let the pretty family-friendly exterior of Mario + Rabbids fool you, this is a game that will have you pondering on how to best execute every turn without putting your characters in harm’s way, or risk having to restart all over again a dozen turns in. This is especially true in later worlds, with the sheer assortment of bad guys further complicating decisions.

It’s often said that turn-based strategy games require a lot more thought than real-time ones, and that holds true with Ubisoft’s newest creation. But the developer understands that it’s catering to a different crowd with the mashup of Mario and Rabbids, and there's an option to enable Easy Mode before the start of any level, which gives you 50 percent more health and resets any earlier damage.

Uh-oh
The only complaint we have with the campaign is that it’s designed for a single player. Yes, Mario + Rabbids does have a separate co-op mode for two players, which gives you special challenges to take on across the different worlds. But to unlock it, you need to play through each world before you can unlock the companion co-op levels, and that means you’ll be spending more time playing the game by yourself before you can join up with a friend.

It’s strange that Ubisoft doesn’t allow multi-controller support in the campaign, given that you always travel in a pack of three. It would have made perfect sense for players to pick the character they most prefer, especially seeing how the Nintendo Switch is helping revive local multiplayer. For what it’s worth, you can always rely on passing the controller with every turn.

For those who love couch play, you’ll be glad to know the multiplayer levels are specially designed for co-op play, which lets you pick two teams of four heroes from the ones available to you. You’ll also retain the same abilities and weapons you’ve unlocked in the campaign, which will give you a better shot at re-attempting the levels. There are three difficulty options – easy, medium, and hard – and you can only try the latter once you’ve finished it on either of the previous two.

One other niggle we had is with the several mini-games that you will find hidden away during your journey. These tend to be solely focused on completing a given task, like collecting all the coins in a set amount of time. Mario + Rabbids isn’t well-suited to quick and precise movement, and it can end up being quite frustrating to work against the clock when your characters only perform actions at a very specific angle.

Let’s-a-go!
But those are small concerns in what is otherwise a very compelling package. From the hours we’ve spent with the game, it’s clear that Ubisoft Paris and Milan understood what is so beloved about the bunch of Nintendo characters, and fully embraced the aesthetic and style that people of all ages have fallen in love with. Even the small animations – be it Luigi’s intense sniper glare, Princess Peach’s gracious landing, or a bad guy attacking in a WWE-type fashion – further add to Mario + Rabbids’ charm.

It’s also a great game for a portable console such as the Switch, which naturally lends itself to genres that don’t require constant or long-periods of attention, such as turn-based combat. You can easily get through a level or two when you’re travelling, waiting at the doctor’s, or watching sports on the telly. All in all, Mario + Rabbids Kingdom Battle is a fantastic addition to the Switch line-up, and it’s also a great strategy game that brings fresh ideas to the genre.

Gadgets 360 played a review copy of Mario + Rabbids Kingdom Battle on the Nintendo Switch. The game is available at $59.99 (about Rs. 3,850) digitally via the Nintedo eShop, or at Rs. 3,499 physically on cartridge. It takes up 2.3GB of storage space post download.