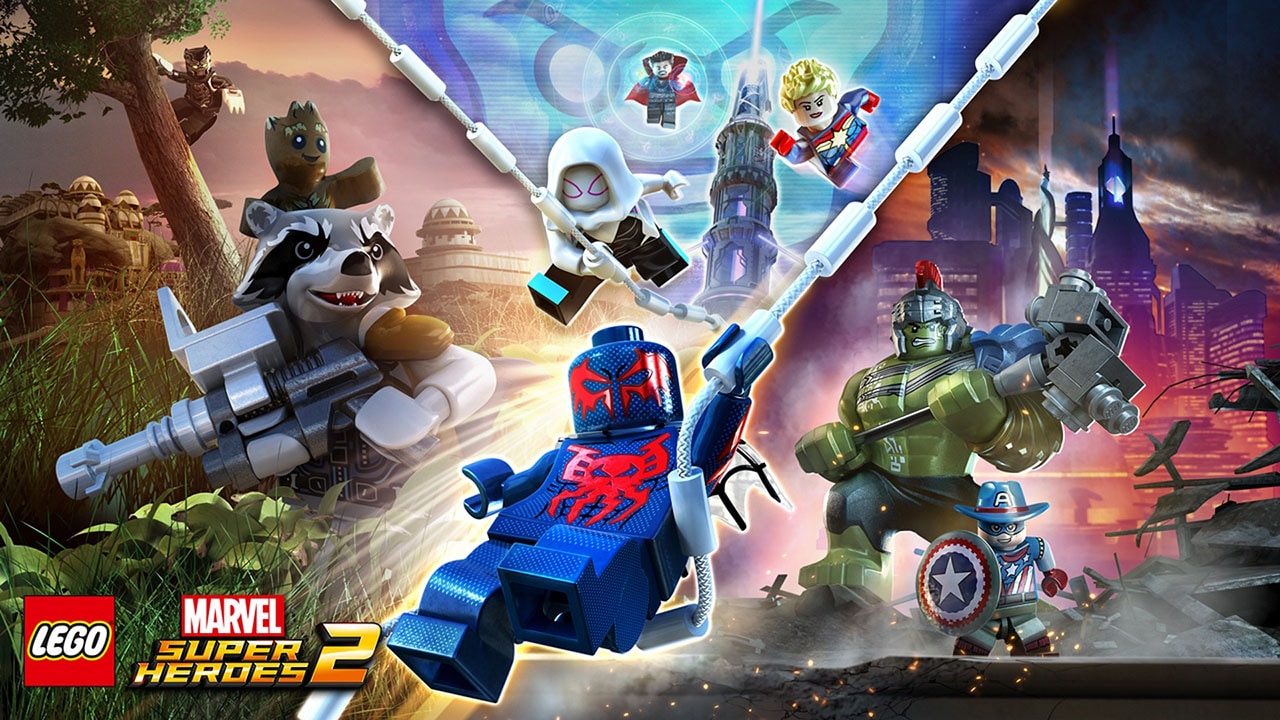 Fifteen minutes into Lego Marvel Super Heroes 2 – the newest addition to developer Traveller's Tales' super-long line of Lego-themed franchise video games that have explored everything from Star Wars to Harry Potter – a random press of a button led to an accidental discovery that would become one of our favourite moments. With Star-Lord, you can enable a mixtape mode that drowns all outside sounds, and makes all enemies stop fighting and instead dance to Redbone's Come and Get Your Love, from the original Guardians of the Galaxy soundtrack. It's a shame they haven't been able to license enough songs to avoid repetition, but nevertheless, it's a whole lot of fun.

That joyous, infectious personality is at the heart of this new Lego adventure, a follow-up to the 2013 original that includes every Marvel hero you've heard of from the movies and TV shows, in addition to hundreds more from the comics, but loses out on some that were there last time around: Deadpool, Fantastic Four, and the X-Men. There are enough here though (a total of 236 before its downloadable content, which will include future Marvel films) that you won't mind missing the few who couldn't join the party. While some are modelled on the Marvel Cinematic Universe – Guardians of the Galaxy being the obvious ones – others are adopted from the comic book pages, stretching back to as far as when Marvel was still called Timely Comics.

Lego Marvel Super Heroes 2 has an original storyline of its own, unlike last year's disappointing Lego Marvel's The Avengers, and it begins with Star-Lord and his crew zooming alone through space, before their help is requested on Xandar, the same planet you saw in the first film. There, a giant ship in the shape of a sword – with chief antagonist, Kang the Conqueror (voiced by The Tick's Peter Serafinowicz), aboard – arrives to take over the planet, before departing for Earth. The Guardians are unable to prevent the megalomaniac mastermind from executing his plan, which rips time-space continuum and leaves them in Chronopolis, a world where different realities and time periods exist side by side.

The story has been co-written by comic book veteran Kurt Busiek, and the premise is an intelligent way to create a massive open-world for players – possibly the largest in a Lego game so far – which spans Manhattan in New York, the ancient city of K'un-Lun, medieval England, a Hydra empire, and beyond. And thanks to portals opened up by Kang, it gives you the ability to quickly travel between these realms, so you can jump from a Noir version of Earth to Attilan (the ancestral home of the Inhumans) with the press of a button. The best part of any Lego game is exploring the open world, and you'll need to get through 20 story missions before you can go wherever you please.

As with prior Lego games, the campaign adventures consist of the same format: visit a new Chronopolis location, fight your way through with a preselected team of Marvel heroes, solve a few puzzles along the way, before ending in a climactic boss fight with a villain character, from Doctor Octopus to Man-Ape. New elements include the ability to manipulate time (Doctor Strange to the rescue), but Lego Marvel Super Heroes 2 loses out on combat combos from Lego Ninjago Movie Game, and the multi-build feature introduced in last year's Lego Star Wars: The Force Awakens.

Traveller's Tales has made up for that absence in level production design, thanks to the variety of locations at hand, which stretches from gleaming cities such as Sakaar (seen in Thor: Ragnarok), and the Siberian tundra, to a futuristic 2099 version of New York City. Each level is highly imaginative, and looks different from the previous one, ensuring that your kid – all Lego games are targeted towards co-op, especially for parents and children – will enjoy them as whole-heartedly as you do. Add to that the banter provided by the Marvel characters, featuring original voice-acting unlike the reused lines in Lego Avengers, and you get a sequel that's showing significant improvement.

Each of these over 200 characters have their own abilities. Some of them can fly (Iron Man), some can transform (Ms. Marvel), while other can swing from the skies (Spider-Man). In terms of weaponry, some have melee attacks only (She-Hulk), some can launch projectiles (Star-Lord), and other can use their defence as projectiles (Captain America). Combat is still easy as ever, since it's designed to be kid-friendly, and the only thing you lose upon dying are a few Lego studs that you can collect after you respawn. When you need to perform a special action, the game will either prompt you, or display a card of the hero that has that ability.

The only problem with the open-world of Lego Marvel Super Heroes 2 is that it can sometimes feel too congested, and you can lose out what you're supposed to do next amid that cacophony of visual elements. Some levels need you to free Stan Lee (voiced by himself) and unlock collectibles as a result, but it can be tough to spot him even though you can hear him shouting. Not all heroes can easily grab onto a ladder either, and we found ourselves switching to characters that could fly to get out of a tight spot. It's not exactly solving what the platformer asks of you, but rather circumventing it.

Another annoying issue is that players being controlled by AI – you can have up to two-players in local co-op play across all platforms – just stand around doing nothing most of the time, instead of helping you at least dispose of the minions that come your way. It's much less of an annoyance if you're playing with a partner, but it just feels stupid when you're by yourself, with most of the cast just staring at you while you're busy thwarting Kang and saving the world.

And with the combat combos and multi-build missing, what you do in Lego Marvel Super Heroes 2 falls back to the same tired system in most Lego games before: bust up every piece of furniture to collect studs for unlocking new characters, and bash the bad guys while dodging their attacks and any environment traps. It's a cookie-cutter system that ran out of appeal a while back, but Traveller's Tales sticks to it anyway. What saves the new Lego game are a couple of fun action sequences, the easy charm of talking Lego pieces, visual gags, and smart writing.

If you stand around a level with nothing to do, Spider-Man will start to dangle a camera from his webs and take selfies, presumably to support his alter ego Peter Parker's day job as a photographer. The Daily Bugle's editor-in-chief J. Jonah Jameson is used as a clever exposition vehicle, with the newspaper man appearing as part of "live streams" now and then, where he broadcasts his stubborn views on the Kang affair with the full power of his authoritative voice. It's also fun to see Ms. Marvel geeking out that she's fighting alongside Spider-Man, or Captain Avalon – the medieval version of Cap – talking in Old English with knights.

Of course, all this will be most enjoyed by the Marvel super-fan – each level even ends with a Timely Comics comic book cover and a two-page inside panel listing your achievements – though Lego Marvel Super Heroes 2 has enough to draw in those who have only consumed the film and TV adaptations. It's nice to see characters such as Ms. Marvel and Spider-Gwen get prominence, in addition to both baby and adult Groot, and parody additions such as Spider-Ham, and Iron Duck. The fourth-wall-breaking Gwenpool, replacing Deadpool from the original, provides stellar commentary and further 10 levels after you complete the main campaign.

When you're done with all that, you can take to the Super Hero battling mode, a local-only multiplayer option for four players, first introduced in Lego Dimensions. It offers two options: one where you've got to hold onto Infinity Stones for points, and the other has you collect and store coloured Lego blocks. Both modes suffer from balancing issues, given that heroes have wildly varying abilities in terms of movement and combat, which means you'll require some trial and error before landing on the option that works for you best.

Even if it presents much of the same we've come to expect from Lego video games by now, there's a beating heart at the core of this double-brand promotion exercise, which understands what makes these characters tick and always strives for a silly punchline to entertain you. It greatly helps that it doesn't reiterate the movie plot like Lego Avengers, but creates its own story with locations, characters and vehicles that everyone is familiar with, or will enjoy. It's not going to challenge you, and it can be a tad confusing at times, but Lego Marvel Super Heroes 2 is a fun-filled adventure worth diving into.

SenseTime Plans IPO, US R&D Centre as Early as 2018
Samsung Galaxy A5 (2018) Case Renders Leaked, Giving a Glimpse of Design