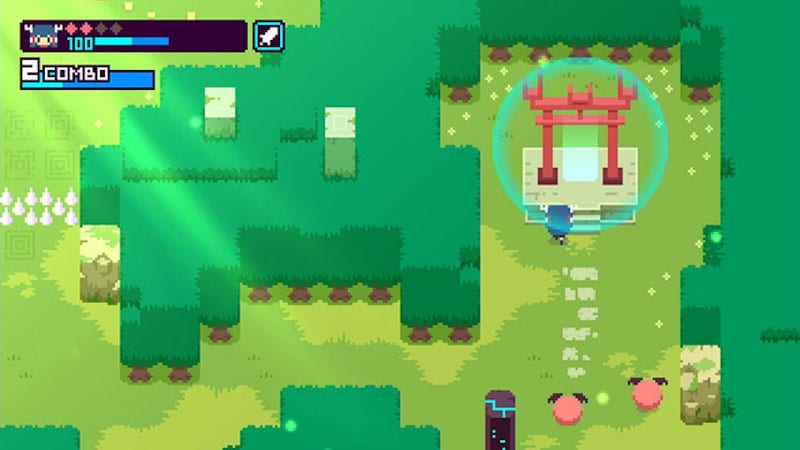 Developed by Japanese studio Skipmore, Kamiko's price and early launch on the Switch give it an advantage, but that’s not the only reason to play this game. Kamiko is a top-down action-puzzle game on the Nintendo Switch. Parts of the game reminded us of Hotline Miami on the PS Vita, although Kamiko is overall not anywhere close to that level of consistent excellence.

The basic control scheme is very simple — you use the D-pad or left stick to move, A to attack, and B or ZR to dash. There are some places where you’ll have to flip a switch and dash past a bridge super-fast. If you waste even half a second, you won’t make it to the other side. But the controls are very responsive, and the game never felt needlessly frustrating. The boss fights are a lot harder than killing random monsters, but with a little bit of practice you should be able to clear these too. There is no permanent death in the game, so if a boss kills you, just start the fight again and you’ll eventually defeat it.

Kamiko’s story is quite thin but it does its job in providing a good introduction and a reason to attack monsters in the game. A demonic force is about to invade the world of mortals and you can play as one of three female characters that dwell in transient worlds between the land of the living and dead. Demons have sealed several gates linking these worlds and your task is to liberate the gates and avert disaster.

Kamiko is quite short, and moderately skilled players will take less than two hours to finish it. However, it is a journey made enjoyable thanks to some nice pixel art and its chiptune soundtrack.

Each of the three characters you can play as has different weapons, such as a sword or a boomerang-like ranged attack. This adds replay value to the game, as each character faces a different challenge in defeating enemies. There are four basic stages and in each stage there are four gates that you must liberate.

This is simple enough, except for the monsters lurking in your way. It’s quite easy to defeat most monsters — one to four hits will kill most of them — but the problem is that once you leave an area the monsters respawn. Typically, you will beat monsters, go to a room, collect a key, and then go to use the key. However, once you pick up a key, you can’t use your weapon until you deposit the key into a door or a gate. And if a monster hits you, the key falls and you have to go and collect it again. This means that you can’t always keep slashing away with your sword, and expect to clear the entire game.

Kamiko also has some puzzle elements in finding these keys and unlocking doors, although none of the puzzles are particularly hard to figure out. Some of them have the item you need hidden rather cleverly, but you’ll find them after a few minutes if you just persevere. Killing monsters over and over did feel tedious as we don’t see why these monsters should respawn immediately after you’ve killed them. This led to situations where we’d go to an area, clear all the monsters, fail to figure out a puzzle and move to a different area. Later, we’d realise that the puzzle’s solution was quite obvious and in the first area. Upon returning, we’d have to kill the same monsters again and that becomes tedious. Instead of focusing on puzzles, we were getting rid of the same monsters over and over at times.

Overall, we did enjoy playing Kamiko as it’s designed quite well for the handheld mode on the Nintendo Switch. The game looked great even in Dock Mode when we connected the Switch to a widescreen monitor. We did find ourselves wishing for a better story and slightly more in terms of gameplay, and the length of the game. However, the game’s short length keeps it from feeling overly repetitive. At that price, it’s a relatively safe bet for anyone who likes retro top-down action games.