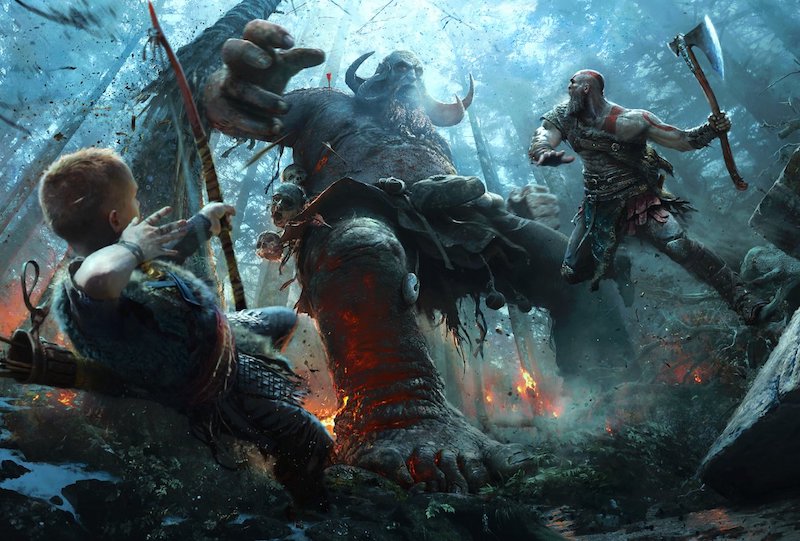 God of War for the PS4 is one of the few games this generation we’ve wanted to return to right after finishing off its main campaign. It’s testament to how good its combat, exploration, puzzles, and lore are, compared to prior titles. Despite being the seventh game in the series - or eighth if you count its feature phone release - developer Sony Santa Monica has decided to name it simply God of War, as it is a reimagining of the franchise for the PS4. And it’s not just the name that’s changed.

Gone is the genocidal rage that fuelled protagonist Kratos in past games. Kratos is now a calmer, somewhat wiser character, who has reigned himself in as he now has a child, called Atreus. And - as was made clear from the game’s trailers and its E3 2017 preview - also missing is the Greek mythology that drove the story in past entries. This time around, Kratos’ adventure predominantly takes place in Midgard, one of the nine realms in Norse mythology.

With a new setting comes a fresh narrative. Kratos isn’t on a mad quest to kill gods; instead, along with Atreus, he sets forth to scatter his recently deceased wife’s ashes from the highest mountains in all the realms. Naturally, with all things Kratos, it soon involves witchcraft, fantastic beasts, and mysterious strangers with otherworldly powers. Combined with a generous serving of ogres, draugrs, revenants, reavers, elves, and all other assortment of Norse-inspired terrors quick to seek the business end of your axe, it turns into a rather interesting tale punctuated by ferocious bouts of action, exploration, and puzzle-solving.

Without spoiling much, God of War’s narrative and attention to detail stands out. There isn’t much by way of bombastic moments, but what it lacks in spectacle, it makes up for in nuance. Over the 20 hours or so it took us to finish the game, we got to see Kratos and Atreus’ relationship evolve over time, as well as their interactions with a small but memorable supporting cast - such as the dwarf brothers Brok and Sindri, as well as talking head Mimir, to name a few.

Of course, the big draw in every God of War game is the combat. This time around, Kratos is using an axe as opposed to his blades from past games. Aside from the obvious light and heavy attacks, you can throw the axe at enemies, call it back, and upgrade it with powerful abilities such as summoning knives of frost to upend your foes. Each axe swing, every block, and even evading foes feels just right, with a sense of weight that’s unlike other action games which prefer a more arcade-y, fast-paced handling. It results in a deliberate, meaty feel that makes beating up enemies a treat even 20 hours in.

Backing this up is a slick upgrade system. Both Atreus and Kratos can be kitted out with new armour, skills, and upgrades that liven up the proceedings. Atreus is far from a slouch in combat with his use of bow and arrows complementing Kratos’ axe brilliantly. You have the ability to precisely dictate where each axe throw lands, as well as to command Atreus to fire arrows and summon forest spirits, and this gives a more tactical feel to the proceedings. All in all, bashing up God of War’s many monsters is a treat.

Throw in a healthy number of puzzles and environmental design that borrows from the likes of Dark Souls, Metroid, and Castlevania, and you have an entry in the franchise unlike any other. As you progress you’ll obtain items that help you open up once unreachable areas, partake in side-quests that yield rewards like new gear, and learn of Midgard’s past. The puzzles themselves see Atreus and Kratos try to get past all manner of death traps, such as spikes and pits in a fashion not too dissimilar to Uncharted: The Lost Legacy, except they aren’t as tough and you’re never far from a solution. At the same time they don’t feel like they’re watered down either, striking a balance that's far from the frustration puzzles have been in prior entries.

Perhaps our only grouse is related to the game world and how one specific element is presented — the map. While most of the action takes place in Midgard, there are other realms you can travel to. For some of these, you need you to find travel runes, while others can be visited as a part of the game’s plot. Of the nine realms including Midgard, three are locked out completely. These are Asgard, Svartalfheim, and Vanaheim. It’s a minor annoyance if you’re the sort who has indulged in a steady diet of open-world collect-a-thons that have punctuated this generation. That said, at the end of our journey we didn’t feel robbed of content, thanks to what we experienced along the way. From exploring a village frozen over due to a dead giant, to vibrant lands occupied by elves, the sense of pacing and its stellar cast made God of War an entertaining affair through and through. When you’re done with its main campaign, you can go back and explore its realms, finish side-quests, and seek out whatever else it has to offer.

One thing to point out is that if you’re playing God of War on a PS4 Pro, your mind isn’t playing tricks on you, the console really does get that noisy, as if it were competing with a fighter jet to break the sound barrier. And it doesn’t just happen when there are a ton of enemies on the screen. Rather, it also occurs during quiet moments like buying items or conversing with other characters. The noise persisted even on removing the case of our PS4 Pro and cleaning dust in and around the machine. It wasn’t just our unit either, our colleagues and fellow reviewers have chimed in facing the same issue. This was regardless of game mode — and there are two to choose from — allowing you to prioritise frame rate or visual fidelity.

We also tested God of War on a PS4 Slim, which was far from noisy. The game still looked good too, although it obviously didn't match up to the PS4 Pro with 4K and HDR. For now, we’ve reached out to Sony for comment, and hopefully an update fixes this noise issue on the PS4 Pro. That said, no matter what you choose, God of War is great to look at and the action is fast-paced with barely a frame out of place.

All said and done, Kratos’ PS4 debut is, if you’d excuse the pun, a god tier affair. Fan boys may deride the lack of spectacle and its nuanced take on a well-loved protagonist may not be for everyone, but it's rare to see a reimagining to a series handled as deftly and with such polish and care.