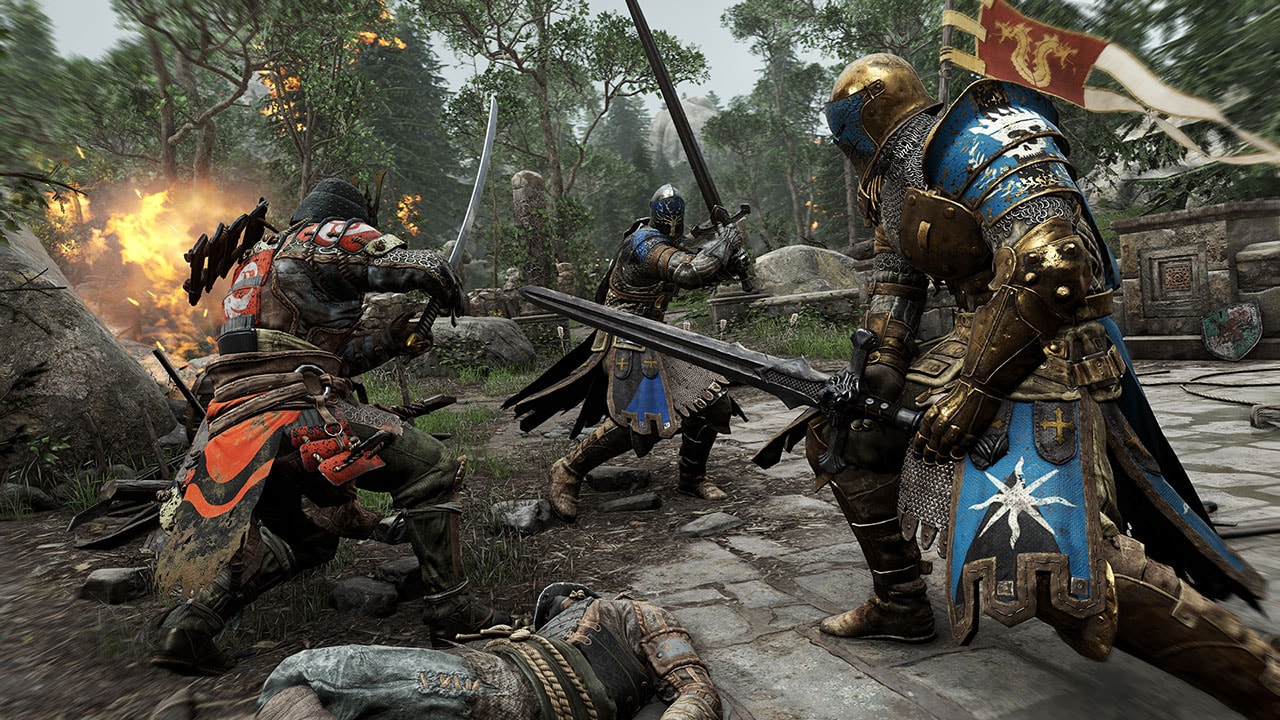 For Honor, like classic action-fighting games of its ilk, demands your fullest attention at all times. You need to be watchful yet aggressive, flexible yet precise, and calm yet adventurous. It's a delicate balancing act – one that takes time and skill to hone – and doesn't come easy. We've lost count of how many times focus has given way to panic, and we found our character beheaded, repeatedly stabbed, or with a broken back.

Ubisoft's latest game, developed by the same people behind Assassin's Creed, Watch Dogs, and Far Cry, is for the most part a multiplayer title. All of its carnage – between the three factions of Knights, Vikings, and Samurai – is designed to take place between human opponents across the game's various online modes, which we've talked about earlier. For Honor's true potential, amidst all the waiting and killing, best displays itself in Duel, a best of five one-on-one mode, where it's just you and your weapon of choice – no extras.

If you're looking to improve yourself, there's no better way to do that than to duke it out in Duel. That's not to say For Honor's other multiplayer modes are any less fun. While Brawl is a simple 2 vs 2 upgrade of Duel, Dominion forces you to strategise. The maps in Dominion have three control points that help generate points, which are crucial in putting an end to your opposition's ability to respawn. It also comes with its own non-playable character fodder, which are much easier to kill, and only exist as a helping hand of sorts.

Admittedly, there isn't a lot of variety at hand, but the satisfying nature of action on the battlefield allows you to overlook that. Understanding the controls, and mastering them are two very separate tasks in For Honor, but once it starts to click, the moment-to-moment gameplay turns into a dizzy calculation of picking the best one out of our arsenal. You can block an enemy's weapon swing, parry it and destabilise them, or counter-attack with your heavy move. You can also dodge it, roll away, or simply take to sprinting.

For those who plan to pick up For Honor for the PC, it's worth noting that the introduction of keyboard and mouse brings some small changes. The biggest among those is the relation between sword movement, and a couple of controls – guard break, and dodge.

On a controller, sword movement – which enables blocking and hitting – is controlled via the right analogue stick, while guard break and dodge are placed on the adjacent buttons. That means controller-players will be using the same fingers to switch between the two. With a computer, sword movement is done via the mouse, while the controls are on the keyboard. That means separate hands, and possibly quicker reflexes for some.

Considering how important blocking and parrying (sword movement), and countering a guard break (button controls) can be, using the keyboard and mouse may well be a boon. If you're playing on the PC, and own a compatible controller, you should try out both variants in practice mode, to see which works better for you personally.

Heroes assume a natural guard position when locking onto an opponent, but you can get through that with guard break. With a well-timed press of the button, you can also block the guard break, so you don't end up vulnerable to an attack, or go further and land one of your own. There's a stamina bar that governs how long you can fight continuously before having to take a breath, though all types of movement are excluded from it.

For Honor's problems lie with the thinking behind the construct of multiplayer progress. The developers have coded two different aspects – a sense of community and ownership, and daily targets – that are meant to prod you along, and invite you back into the game. The first of those comes by way of dividing the multiplayer arena into areas controlled by the three factions, which you contribute to, and can earn rewards from. As you push forward or fall back, the map type for matches changes accordingly.

Before we discuss the second – daily targets – it's worth explaining how For Honor's in-game currency, called Steel, works. Your actions online can earn you Steel, or you can buy it with real money. There are a number of ways to earn Steel, but all of them give you different amounts. “Complete Matches” is the lowest tier and the slowest way to earn it; then there's “Complete Orders”, which comes from the daily tasks For Honor assigns you; and the third is “Purchase Steel Packs”, which is slowly becoming the standard across companies and titles, to entice you to pay further even after you've spent thousands on picking up the game in the first place. The in-game currency format has become a shameless tactic to adopt for publishers, and Ubisoft's For Honor is no exception to that rule.

Steel has a whole number of uses, as you should expect. You can unlock the different Heroes available in For Honor quicker, you can buy or upgrade gear, or even unlock additional powers. To entice you further into doing so, there are things like “Champion Status”, a special badge that can be bought with Steel. With that, the game says you'll get “an enhanced For Honor multiplayer experience”, which makes no sense considering it's not a free-to-play title. Why isn't that already included?

You could always choose to rely on winning matches, and ticking off the tasks to get more Steel, but don't expect to earn much. Not only does the game want you to return to it every day, For Honor seems explicitly designed to make you open your wallet (there's also a Season Pass), with the game continuously highlighting the targets you should be hitting, instead of letting you vicariously enjoy a fantasy rendition of the Middle Ages. If you really want to do the last bit, you're better off with For Honor's single-player campaign.

Apollyon, the female leader of a warring Knights faction called the Blackstone Legion, serves as the primary antagonist for the story campaign. Depending on the faction you pick at the start of the game, you can play as either of Knights, Vikings, or Samurai, all of whom have a dedicated chapter in story mode. Each has its own starting point and character, and tell the story through six sub-chapters. If you pick Knights or Vikings, you will start as one of the most balanced playable classes in For Honor – Warden for former, and Raider in the latter case. The Samurai chapter is the outlier here, which starts you off as a specialised warrior, in the form of assassin-type Orochi.

At the beginning, Apollyon narrates over a thousand-year timelapse of the endless fight that's been going on between the three factions, saying she's here to incite war, and lead them into an “age of wolves”, where survival of the fittest is of the animalistic kind, and not one that involves any kind of diplomacy. Nothing too creative, we know. During its 10-hour campaign, For Honor hardly bothers to comment on any aspect of war beyond the boasts of ones who perpetuate it for their self-serving needs. There's no talk of the weariness, or proper justification of their differences.

Either way, it's hard to justify the monetary investment – Rs. 3,499 on PS4, and Xbox One; and Rs. 1,799 on PC – given the state of story mode, and the grind and hunger of its multiplayer counterpart. For Honor is a truly engaging experience when you're out on the battlefield, and playing mind-games with your opponents. It goes beyond its contemporaries by adding depth to combat in a way that feels true to reality. But all of its niceties threaten to be overshadowed by the poor taste of the non-playable elements, which seem to be becoming a bit of norm with top-tier video games.

Reliance Jio 4G Not the Fastest, Nokia 3310 Concept Video, and More: Your 360 Daily
iPhone 8: What a Switch to AMOLED Screen Could Mean for You