Pouring cold water on our anticipation. 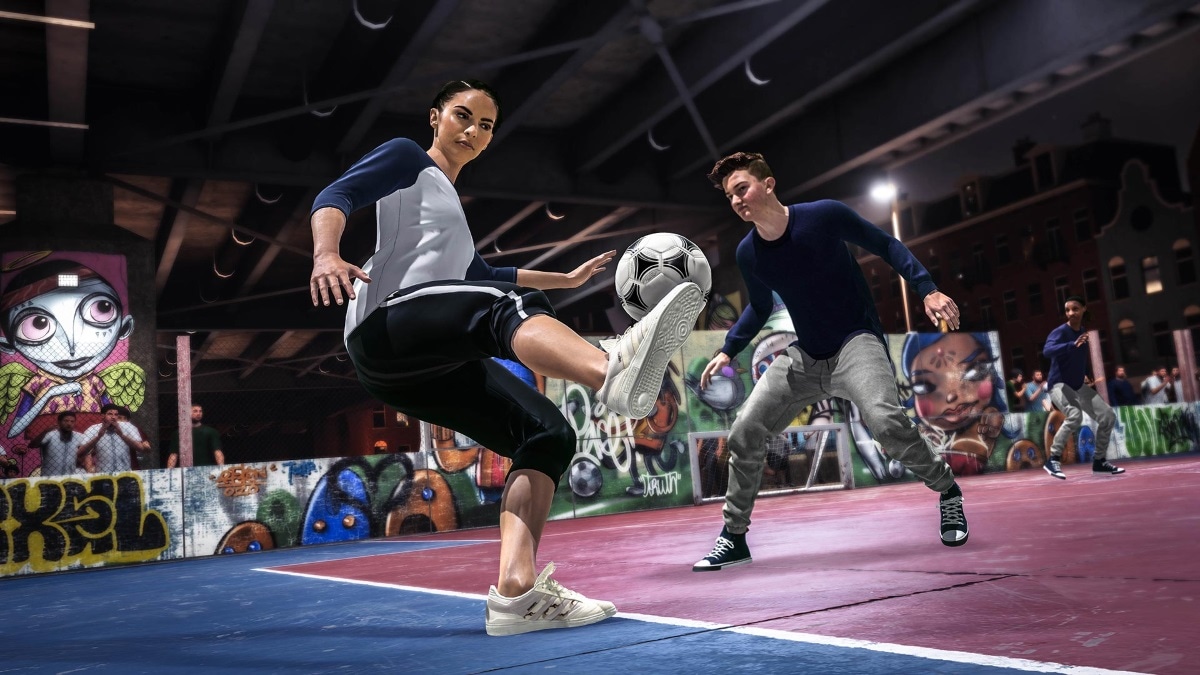 EA Sports has a ton of new changes on offer with FIFA 20, from gameplay to Career Mode, but the one everyone has been more interested in since its announcement has been Volta — Portuguese for “return” — the new game mode that serves as the spiritual successor to FIFA Street. Of course, comparing FIFA 20's Volta to that defunct series is a bit of a moot point since FIFA's DNA is quite different than it was in those days. (The last FIFA Street came out in 2012.) But with EA giving fans a taste of Volta in the FIFA 20 demo — already available for PC, PS4, and Xbox One — what better way to find out the potential it holds? Well, that's exactly what we did.

The Captain Obvious thing with Volta is that there's less space to play. More so on the FIFA 20 demo, because it offers access to only 3v3 without goalkeepers — the smallest of the lot. (4v4 and 5v5, with keepers, will be available in the full game.) That leads to a faster game where possession changes are more frequent, and goals are built more on tiny, individualistic mistakes than tactical ingenuity. And since Volta in the FIFA 20 demo is also restricted to first-to-4 goals, we rarely got to half-time owing to pitch size and fast-paced play.

But the more surprising bit — at least in our limited game-time in the FIFA 20 demo — was that there isn't much skill, style, and finesse to Volta. In fact, the AI opponent tended to bludgeon its way through, with attackers hammering shots at defenders, and then attempting to score on the rebound. If you were hoping, like us, that street football in FIFA 20 would be based more on the principle of that other Portuguese term — joga bonito — Volta's demo is not promising at all. Instead, the whole thing comes across as a restrictive version of FIFA 20's 11v11.

On top of that, there are further factors which deteriorated our Volta experience. For one, there's a higher threshold for fouls. Two, it's much easier to miss the goal because 3v3 features small nets — used in modes without keepers — and EA Sports has opted to make shooting at small nets “almost fully manual”. That means you need a precise control of your left-stick, essentially resulting in a relearn of controls for those used to assisted shooting. Our advice: make use of the trainer, the heads-up display with suggested controls that's on by default. And three, the FIFA 20 demo doesn't bother to teach you anything despite bringing new rules and mechanics.

You can bounce the ball off the wall to create new styles of passing, (lofted) through balls, and lobs. Heck, you can even pass to yourself or pull off a one-two move using the wall as a ‘teammate'. Of course, the ball can still end up outside the pitch if you aren't careful. There are no set-pieces — at least in 3v3 — which means the ball is instantly considered in-play after a foul, allowing you to dribble. And there are new ways to execute existing skill moves, which will be exclusive to Volta in FIFA 20. Moreover, in a cue from basketball, goals count if you shoot before the time runs out.

Not in demo, but Tokyo will be in the full game
Photo Credit: EA

If Volta does shine somewhere at first glance, it would be visually and aurally. With the restrictions of a green pitch lifted, EA Sports' designers can go all out with colours, surface types, patterns, and graffiti in the environment, bringing in more variety and local flavour than professional football would ever allow for. Said local flavour is more prominent with the announcements and reactions — we wouldn't really call it commentary — where FIFA 20 Volta takes after its setting. We couldn't make out anything in the demo, where Volta comes with a single venue called Amsterdam Underpass, so it was either partly or fully in Dutch. The crowd is also more vocal with skill moves and goals.

(There are new camera angles for replays too in Volta, mostly including wide-angle views meant to resemble CCTV footage. Some goal celebrations are shown through the viewpoint of onlookers' phone cameras, lensed either in portrait or landscape mode. We aren't fans of the portrait framing, no matter how realistic some might claim it to be, as it's unnecessarily restrictive.)

EA Sports has always placed an emphasis on presentation, and that shows in how the Volta mode is introduced in the FIFA 20 demo as well. Instead of merely dropping you in, it takes you through a cutscene featuring Real Madrid's Vinícius Júnior playing and scoring against Ajax away in the Champions League. After the match, he finds himself showing off in the streets alongside local footballers, only to be challenged by a crew to a 3v3 game. Vinícius — or any real-world forward — doesn't make for a good Volta teammate though, given he also needs to defend.

And oh, thanks to Volta, FIFA finally has a gender-neutral mode for the first time, allowing men and women to play together.

While Volta looked more interesting on paper, it's the existing 11v11 pro football that turned out more interesting in the FIFA 20 demo for us. If you thought the jockey mechanic — LT on Xbox One, and L2 on the PS4 — was overpowered, well, you've a friend in EA Sports. It's been turned down several notches on FIFA 20, essentially nullifying the cover it provided, as defenders now stay much further from attackers than they used to. As a result, you're more on your own. That means more manual defending: getting to grips with the left stick and more use of the tackle buttons, instead of depending on the second-player cover mechanic to smother the opposition and ultimately win possession.

Get (those tackles) in!
Photo Credit: EA

Additionally, EA Sports has again tried to fix the pace of game in general. In the FIFA 20 demo, the ball feels slower in every respect, be it regular or driven passes, regular or low lofted passes, or the movement of players. FIFA was already slower than Konami's frenetic PES, and this slows it down even more. But it's worth noting that demos aren't a reflection of the final game, and EA Sports has changed things in the past. We also felt a higher inaccuracy with shots as well, which is weird because EA claims FIFA 20 will have “improved 1-on-1 shooting consistency”. If EA does keep everything as is from the demo at release, we are looking at a more considered approach to football, something that harkens back to its FIFA 17 years.

In the FIFA 20 demo, we also felt a greater exhibition of team personality, with the likes of Liverpool and Borussia Dortmund pressing high in force — gegenpressing, as it's known — just as their manager or former manager in the latter case, Jürgen Klopp, prefers. And maybe because we're slightly rusty and have been playing PES 2020 for a week, but the AI in FIFA 20 scored more against us than usual. That said, the reduction in jockey system's cover definitely played a part in it because our defenders just weren't as tight as they would be in previous years. Clearly, we have to work on our manual defending skills.

(If you're wondering what teams are available, you can pick from PSG, Real Madrid, Spurs, and Chelsea in addition to the aforementioned two. The only match type available is the Champions League group stage, though you do have three stadiums to choose from: Santiago Bernabéu, Stamford Bridge, and Tottenham Hotspur Stadium. EA is offering four-minute halves in the FIFA 20 demo, which we feel is pretty decent.)

The other big gameplay change in FIFA 20 is to set-pieces: free-kicks and penalties. A fully-revised setup changes how you aim and add spin to the ball. The target circle is back for the first time in 15 years, though it's not as easy as it used to be. You have to hold the left-stick at a certain position. With spin, you can pick from four different types using the right-stick. Whether the ball will actually end up inside — or outside — the target circle depends on how power you apply to the ball, and the type of spin used. Ultimately, though it's much easier to get free-kicks on target in FIFA 20, that doesn't mean it's easier to score. Which is how it ought to be.

Away from the pitch, the only noteworthy aspect of the FIFA 20 demo are the new additions to the controls page. With “Pass Block Assistance” on, all your players will try to intercept passes. This will hopefully work better with AI teammates who previously used to let the ball pass next to them. The revamped jockey mechanic has a companion speed assistance setting as well, which defines if the game will help you with the defender's speed — or not. FIFA players can also choose between early or late (default) for pass direction lock, to suit your gameplay style. PES has always been on early, or whatever is before early, and it needs this.

Speaking of PES, FIFA 20 can now tell you which defender you'll switch to when you hit the player switch button with the “Second Defender Switch Icon”, something Konami did first. You can also now customise how right-stick player switching works, either relative to the player (default) or ball. And lastly, if you're one of those who uses player auto-switching on air balls, that will now apply to “loose balls” as well, giving you the best shot at winning possession.

FIFA 20 is out for good towards the end of the month on September 27, though it'll technically release next week on September 19 thanks to EA's subscription services for PC, PS4, and Xbox One that provide early access — limited to 10 hours on consoles and unlimited on computers. That will give us a much better look at what EA Sports has built with Volta; it has a new story mode too with the developers able to shift resources from The Journey that ended last year. And there are claimed improvements with Career Mode and Pro Clubs, neglected in years past. We can't wait to study all of it.

Huawei Has a New Android 10 Phone With Kirin 990 SoC in the Works, Geekbench Tips
Apple's Arcade Seeks to Upend Another Business Model