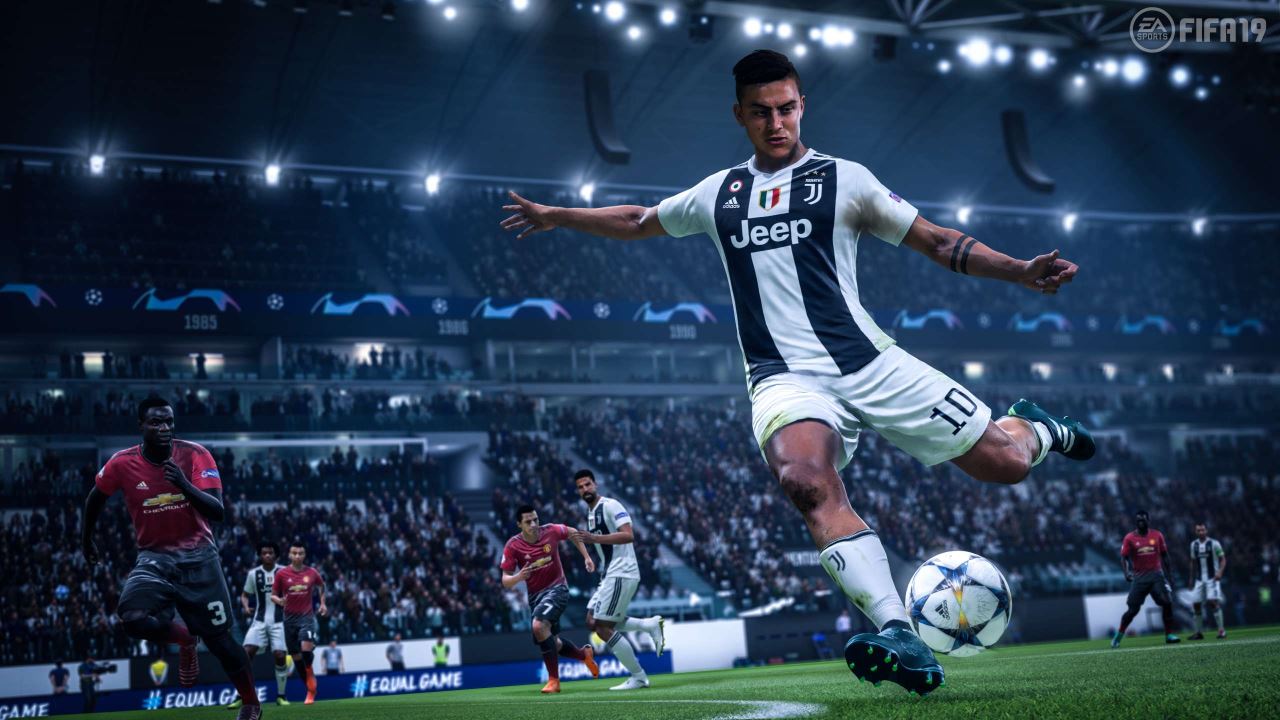 Every year, EA Sports makes a big deal of new FIFA features that infuse more realism to the game, be it ball physics, body movement, player intelligence, and so forth. And that holds true for FIFA 19 — the latest instalment, out this week for all major gaming platforms including PC, PS4, and Xbox One — as well, which promises a reworked first-touch system and improved jostling among other things. At the same time, most game studios are in the business of delivering fun, unless you're making a simulator, say for garbage or tow trucks. In that push and pull, it's only obvious that making an entertaining game would win, which helps explain the unrealistic long shots in last year's FIFA 18, the duality of gameplay in EA's only rival PES 2019, and the shift towards beautiful football with FIFA 19.

FIFA 19 has some welcome additions that bring it closer to the sport. The virtual football feels more like an actual ball — this might sound odd for a football game that's in its third decade of existence — as passes seem to be more affected by friction, dragging the series away slightly from its criticism of laser-guided passing. Players have true, realistic momentum and its combination with the tweaked touch system results in more loose balls and potential possession changes, especially if you are rushing towards the ball with speed. Add to that an AI that exhibits better spatial awareness and hence ends up making more interceptions, by reading the pass opportunities at your disposal.

But on the other hand, the AI in FIFA 19 routinely exhibits quick, flawless one-touch passing, which feels like EA Sports taking a page out of Konami's jogo bonito book. And it's not restricted to big teams only, like we wondered in our FIFA 19 demo impressions, as even mid-tier clubs string together passes with ease. The worst offender of the lot though is the frequency of top players — mostly forwards near the penalty area but sometimes also defenders in other parts of the pitch — flicking the ball up in the air and doing a bicycle kick, all on their own. It's almost like the FIFA 19 developers were so wowed by their cover star Cristiano Ronaldo's iconic moment against Juventus in the Champions League, that they decided to push it wherever possible. They have made it easier for human players to pull it off as well, as a right-stick click now flicks the ball up.

The heads-up display for Timed Finishing in FIFA 19

While that new game mechanic has been buried in the details, the one that has been in the spotlight is Timed Finishing, which offers more power and more accuracy for shots, headers and volleys as part of a risk versus reward system in FIFA 19. A second press of the shoot button defines the timing, which is displayed over your player head with a new shot timing bar for those who use FIFA Trainer or by lighting up the player icon. Green is perfect timing, red for too early, yellow for slightly early, and white when too late. Only a perfectly-timed shot is better than a regular shot — the old single press — which really tips the scales towards risk in the risk versus reward element of FIFA 19's gameplay. And that's intentional, given the feature is meant to increase skill gap in the game. The best way to get the hang of it is to keep FIFA Trainer on — you can turn off the other annoying indicators except for Timed Finishing — and make use of the pre-match training arenas.

The other big change to gameplay is courtesy of the team management screen, where the tactics page has been overhauled and you can customise five team mentalities, as we discussed in our demo piece. Having spent more time with FIFA 19, we could appreciate how those two work hand-in-hand, with teams like Tottenham running us off the pitch with a combination of Constant Pressure and Fast Build Up at times. Additional instructions are available as well for individual players, with the option to choose from inverted or overlap runs for full backs, centre or cover wing for central midfielders, free roam for wingers in addition to cut inside and stay wide, as well as turn them into target men. And on the pitch, there's a small but noticeable change to goal-kicks, where the camera stays locked so you won't know the direction of your kick unless you have the Trainer turned on.

Off the pitch, there are several new kick-off modes in FIFA 19, including the much talked about Survival, where whichever teams scores a goal sees one of their players ejected at random, up to a maximum of four. No, you can't score an own goal to knock out an opponent player off the pitch, if you were wondering. Then there's No Rules, where fouls and offsides are turned off and anything goes. EA hasn't customised the AI to take advantages though, so it won't intentionally foul you or stay offside. In other kick-off modes, long shots count as two goals or only headers and volleys count as goals. Honestly, these modes are best played with friends or family, where you will tend to have the most fun (and possibly damage a relationship or two in the process).

Champions League night at the Wanda Metropolitano in FIFA 19

Speaking of new things, FIFA 19 now has the Champions League license after 10 years — if you've somehow missed all the marketing — in addition to the other two UEFA club competitions Europa League and the Super Cup, after Konami opted not to renew its deal. (In smaller news, the Serie A and the Chinese Super League are licensed as well.) That means a whole new broadcast package and a new commentary team consisting of Derek Rae and Lee Dixon, who are known for their work in the US. Strangely enough, we noticed delayed commentary at times in Champions League, which wasn't the case with old-timers Martin Tyler and Alan Smith. FIFA 19 almost feels like UEFA 19 at launch given it launches you straight into Champions League, though it's understandable for the money EA must have spent on getting the rights.

FIFA 19's attempts to wow you out of the gate don't stop there — the setting is the Champions League final between Juventus and Paris Saint-Germain, for Ronaldo and Neymar are the joint cover stars on the Champions Edition — with EA Sports likely indulging in a bit of AI scripting to increase excitement levels, leading to an eight-goal thriller for us, which hasn't been rivalled in the hours we have spent since. But it's the sheer variety on offer that confirms FIFA is now far ahead of Konami's Pro Evolution Soccer. Once you're done with Champions League introduction, the first menu option is The Journey, the third and final chapter of the story-based mode that started in FIFA 17. Borrowing from GTA V, it's gone full three protagonists — Alex Hunter, his step-sister Kim Hunter, and his best friend Danny Williams — this time around, rather than glimpses in past iterations.

But interestingly, The Journey actually begins decades ago in the ‘60s with a FA Cup match between Arsenal and Coventry FC, where you get to play as Alex's grandad Jim Hunter. It comes with its own special presentation too, with a leather ball, a muddy pitch, a minimalist scoreboard, and even era-appropriate commentary. There are discussions about how yellow and red cards are to be introduced soon, how that might change the game and how referees will approach it. After that, you're thrown into a practice game with Kim, where US superstar Alex Morgan makes her first appearance. So that's Champions League, a throwback and women's football, three different styles in three different games. It's all great except one annoying facet: FIFA 19 doesn't let you play as an individual in the two opening Journey games.

The first 'Team of the Week' in FIFA 19 Ultimate Team

And then there's Ultimate Team, the highest revenue-generating mode of every new FIFA title. Online Seasons has been revamped as Division Rivals, where you still play against other players in real-time but now are assigned a division based on placement matches and weekly performance, with weekly rewards in turn, just as with Squad Battles. It's meant to sit between the more-casual Squad Battles and the hardcore FUT Champions mode. There's a new item too called Player Picks, where you will get to choose one out of five options, in addition to quicker sorting using the right-stick. But none of that addresses the two core problems of Ultimate Team: loot boxes known here as 'packs' and its non-football nature.

Even after the controversy surrounding EA's own Star Wars Battlefront 2 last year and a few countries since banning loot boxes for they saw it rightly as gambling, the publisher seems uninterested in addressing those developments in a healthy fashion. Players are to blame as well; FUT brings in millions each year and EA won't stop until players do or governments make them. We encountered several squads toting high-rated players that would take weeks to assemble — or hours, if you're okay throwing real-world money. Tutorials abound for earning coins and rewards via Squad Building Challenges, which cause price fixing for different cards in different weeks, but more importantly, it has less and less to do with real-world football and instead resembles a card management simulator.

Owing to the focus on Champions League, The Journey, and Ultimate Team in FIFA 19, little attention is paid to relegated modes such as Career Mode and Pro Clubs. While the new UEFA licenses are woven into the former, the latter gets zilch. That means there are no fixes for the issues FIFA fans have been clamouring about for years — be it automatic contract renewals, inability to develop new traits or positions (as is possible in PES 2019), or teams refusing to buy better players despite repeated success — let alone be given new features such as sponsorship options or cutscenes in Be a Pro that are already there in The Journey, and stadium upgrades or reserve leagues in Manager Mode, which would benefit promoted sides and keep young players happy.

Unfortunately, its competition has more than enough problems of its own, which makes it highly unlikely that EA Sports would bother improving aspects that it simply doesn't deem as important. For instance, FIFA 19's graphics are nothing to write home about on Xbox One with some aliasing troubles as well — that might just be a console-era limitation at this point — but it's still better looking than PES 2019. And despite our complaints, it is a more polished instalment than FIFA 18, thanks to gameplay tweaks, stat tracking, and more confident writing in Journey — we will have a separate detailed breakdown soon, as in previous years — which should prove hours of fun as long as you're looking in the right places. Its addition of the Champions League will delight a lot in-game, but off the pitch, it's indicative of a two-horse race losing a contestant.