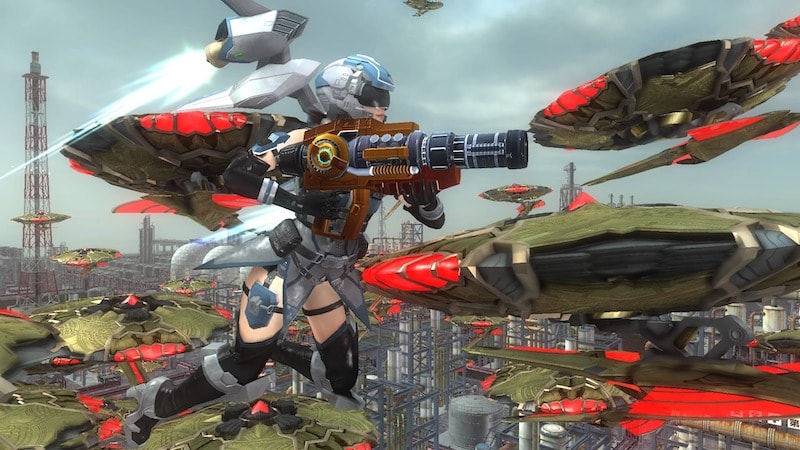 Earth Defense Force 5 for the PS4 has more bugs than every game in this generation put together and that's not a bad thing. Confused? Relax. The bugs we are talking about are giant ants and spiders.

The entire set up of Earth Defense Force 5 is campy and doesn't take itself too seriously. So if you were expecting an engaging plot steeped in character development, this isn't for you. Instead, Earth Defense Force 5 digs deep into B-movie territory with hammy, over the top voice acting that's intentionally out of place and the aforementioned enemies you're up against. In the case of the latter, it steps things up a notch with huge frogs wielding guns and an assortment of Kaiju-like monsters that wouldn't be out of place in 50s sci-fi movies like The Mysterians and Battle in Outer Space — if Starship Troopers had a competent video game adaptation, it would be based on this.

Featuring 110 missions, Earth Defense Force 5 has you killing a lot of monsters. Some missions require you to follow specific characters to progress but for most part, your objective is to kill every enemy on sight. The game doesn't hold back from throwing a seemingly endless number of them in your direction. While other developers make use of the PS4 and PS4 Pro's horsepower to give us better looking games, Earth Defense Force 5's developer Sandlot is more interested in seeing how many giant bugs it can fill on screen. Thankfully, the base PS4 and PS4 Pro hold up well enough with the rare drop in frame rate that did little to impede the bug shooting action.

And shoot you shall, with four classes of soldiers to choose from. These include the Ranger, which can call in bikes, tanks, or helicopters as well as wield an assortment of weapons; the Wing Diver air unit that uses energy weapons and jetpacks; and the Fencer, which has a power exoskeleton and can use two heavy weapons at once. The fourth class is the Air Raider that essentially exists to support the other three with health items and shields, making it a pain if you're playing Earth Defense Force 5 alone as this is one class that tends to get swamped by the numerous enemies you'll inevitably need to deal with.

As you dig deeper into Earth Defense Force 5, you'll find yourself experimenting with the various classes of soldiers. This is because not only do you gain gear and weapons for the class you're currently playing as, you'll also obtain loot useful for the others too, ensuring that all classes are well-equipped. This opens up new methods of finishing the game's many levels.

Speaking of levels, there's little in way of variety. For most part, they're large areas giving you enough room to run and gun your foes. They have just enough in way of detail with buildings and civilian vehicles, but none of them particularly stand out, ensuring that all your focus is on the enemies around you.

To compound matters further, the controls in Earth Defense Force 5 are inconsistent. On foot or in the air, you'll be able to lay waste to its many monsters with relative ease. This changes when you use certain vehicles like bikes and tanks which feel finicky, especially since you are ejected from them you when you least expect it.

However the biggest offender in Earth Defense Force 5 is that offline and online play are separate. So, if you start an online game with a few friends, your progress doesn't carry over if you decide to continue offline, and vice versa. In essence, you're forced to choose between the two, which is annoying as missions in both modes are the same, with difficulty ramped up for co-operative play.

Despite our issues regarding player progression, Earth Defense Force 5 largely delivers on the promise of over-the-top bug shooting action. It may not have the same depth as many other titles, but there are more than enough moments of big stupid fun across its 60 hour campaign to make you want to give it a go.