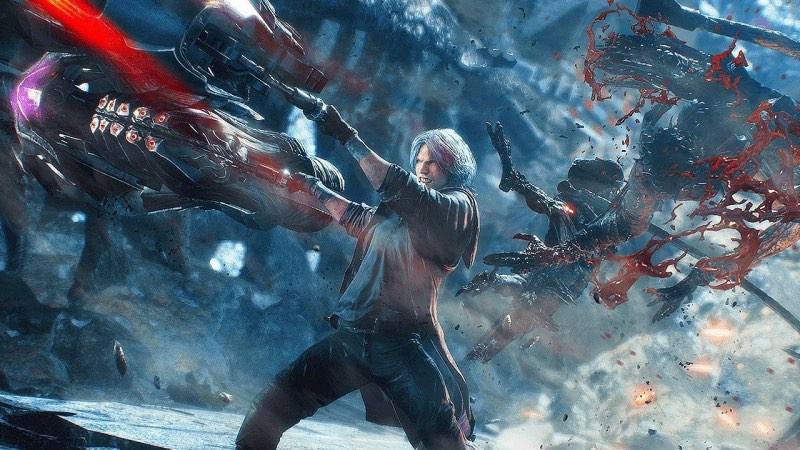 While our Devil May Cry 5 review touched upon the Xbox One X performance of the game, since then we've also had the chance to spend some time with the PC version of the game. Despite Devil May Cry 5 looking good and playing great on Microsoft's black box, we wondered if there would be any benefit to playing it on PC. Capcom's current PC output has been solid. Both Monster Hunter World and Resident Evil 2 sport enhanced visual options that justify playing them on PC. Last year's Devil May Cry HD Collection is the rare recent blemish thanks to its anaemic settings and graphical glitches, is Capcom's latest hack-and-slash adventure any good on PC? Here's everything you need to know.

Announced back in September, Devil May Cry 5's PC specifications are on the lower side with the bare minimum requiring an Nvidia GeForce GTX 760, a GPU that released in 2013. That being said, you'll need at least an Intel Core i5 class processor to get the game running, and 8GB RAM too.

Devil May Cry 5 offers a host of options for you to tweak. These include being able to adjust the quality of shadows, special effects, and textures. You can set frame rate too, though it's limited to choosing between 60fps and a 'Variable' option.

There's also a resolution multiplier. This allows you to play the game in 4K even if you don't have a 4K screen. This means you can force the game to render at a higher resolution and scale it down it to your screen resolution.

Interestingly, the game lacks the dynamic resolution option that was present in titles like Wolfenstein 2: The New Colossus and Assassin's Creed Origins. This method allows games to be as close to its maximum targeted frame rate. Its absence is perplexing as it would make sense given the focus on fast action over all else.

In addition to this, you can adjust the distance of the camera from your character, to get a better view of its locales and the swarms of enemies you're up against, which is a neat touch.

For this game our primary test rig consisted of an Alienware 17 R5 laptop sporting an Intel Core i9-8950HK (4.8GHz), an Nvidia GeForce GTX 1080, 32GB RAM, and a 1TB SSD on Windows 10. Using the latest drivers and every preset set to their highest option, we saw the game hit an average of around 55fps with all settings maxed out.

During boss fights or combat involving more than three or four enemies, this would suddenly drop to 38fps resulting in perceptible slowdowns in gameplay. These weren't frequent but they occurred often enough for us to consider dropping the resolution for stable performance. Dropping down to a mix of medium and high saw this rectified, allowing for a solid 60fps but its effects seen with sword slashes, blood splatter, and flashy abilities looked a bit plain in comparison, making us consider dropping the resolution to 1440p.

At 1440p with all details maxed out we saw a smoother experience. Devil May Cry 5 averaged 60fps with a minimum of 56fps and maximum of 65fps. Playing it at this resolution felt like the sweet spot, allowing us to chain together combos and pull off elaborate attacks with ease without any loss in the game's over the top visual flair.

Setting the resolution even lower to 1080p saw a minimum of 60fps and a maximum of 100fps with an average of about 75fps. Though this resulted in the highest frame rates, playing Devil May Cry 5 at 1080p with our current rig felt choppy. Making use of the option to lock the frame rate to 60fps negates this but there's a discernible difference in image quality, with explosions and environments not looking as sharp as they could be.

Although Devil May Cry 5 is more scaleable on PC thanks to the myriad of options at your disposal, the Xbox One X is no slouch. It holds its own with a steady frame rate.

If we had to choose between the two, the PC version wins out due to being just a bit sharper even at 1440p versus the Xbox One X's 4K resolution. This is thanks to the ability to max out its anti-aliasing and filtering options resulting in a cleaner image.

Furthermore, the loading times are a lot faster on PC too. In our Devil May Cry 5 review we noted that the game was peppered with loading screens aplenty. Be it transitioning from its cut-scenes to its levels or simply customising your gear, they're just as numerous on PC.

While these are about 10 to 12 seconds on Xbox One X, the PC version loading times on an SSD are around five to six seconds. Running the game on a mechanical hard drive on PC had us dealing with near identical Xbox One X load times. Something to keep in mind if you're deciding where to install it on PC.

Clocking in at around 37GB download and a physical version on disc too, Devil May Cry 5 bucks the trend of digital-only PC releases we've been seeing. That said, the Rs. 2,999 price may be a pain when you consider the low prices PC gamers in India are accustomed to. However, what you get is a competent port that looks good and plays well, assuming you have the hardware to run it.