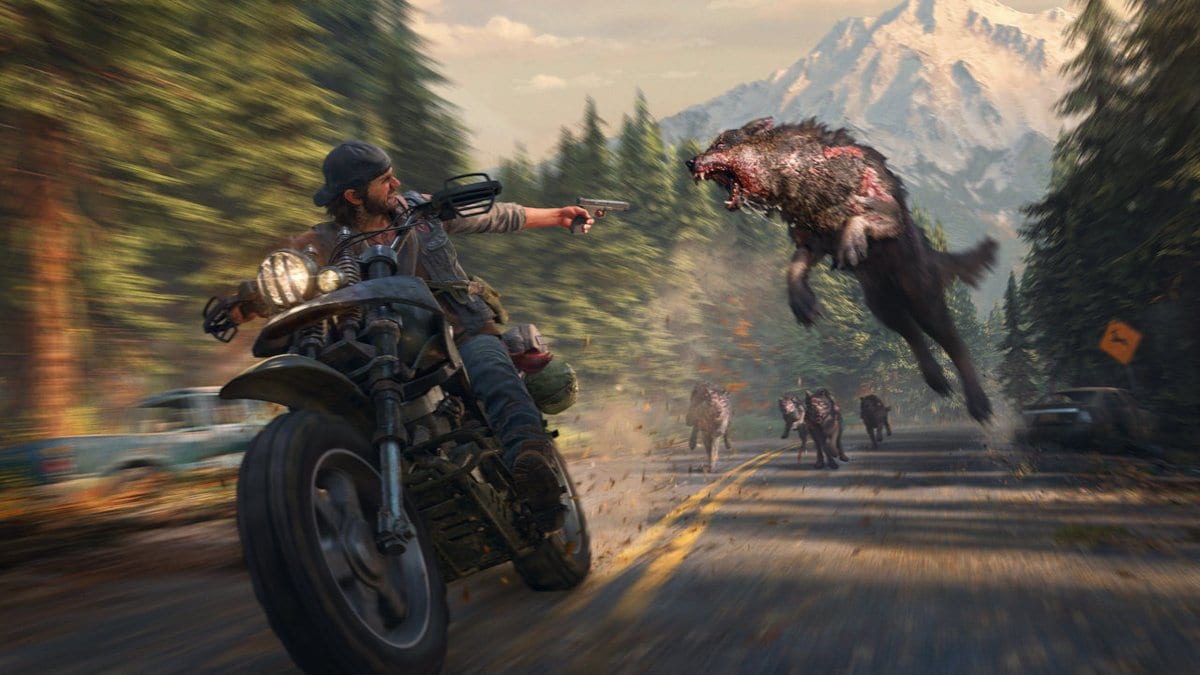 PS4-exclusive Days Gone has the makings of a good game with satisfying combat, fun driving, and some inspired story missions. However, it falls into the stereotypical open-world trap with a ridiculous amount of padding that makes it feel more boring than it should be. Set in a post-pandemic world with abundant greenery where zombies and violent human factions pose equal threat, Days Gone has you as Deacon St. John. He's a bounty hunter who used to be a part of an outlawed motorcycle club called the Mongrels MC. Through Days Gone's events you'll uncover Deacon's past, uncover a conspiracy involving the US government, and mow down hordes of foes both zombie and human.

While this may sound exciting, it's all too often buried under a lot of busywork. You'll fetch an item for a faction, rescue a person of interest, chase after and capture someone who wronged someone else, burn down freaker nests — where the game's many non-human foes spawn from — and craft items like Molotov cocktails aplenty.

If all of this sounds familiar, it's because it is. A lot of time is spent in Days Gone doing the mundane. It's a far cry from how the likes of Horizon Zero Dawn and Assassin's Creed Odyssey pace themselves. Great open-world games have a solid hook to keep you going, be it the mysterious world to explore, a promising story to uncover, or simply the ability to revel in the sheer amount of freedom on offer.

Although Days Gone has all of these elements, they're not presented in a way that's appealing or fun. Critical storylines are confusingly hidden in its menus and quests don't chain together. Instead, you'll finish a mission and there's a brief pause before the next one is doled out via radio. There seems to be little effort made to create any connective tissue or underlying theme between the missions and narrative, more so when most quest lines aren't dealt with in a logical sequence or order.

This means is you'll often find yourself scrounging for items to heal an ally but the next mission after that has to do with something else entirely for an unrelated faction. The end result is a disjointed game which has potential and little else.

It's this poor quest design that hampers what's on offer. The gorgeous world of Oregon promises a lot in terms of visual variety, freedom, and exploration, but you'll find yourself dealing with its many aforementioned lacklustre missions instead.

There are some slivers of brilliance however. For one, the melee combat is excellent. Slamming a baseball bat into the skull of a zombie never gets old. Using Days Gone's many close-range weapons like axes and rods is satisfying, as is using the long-range fare like rifles, guns, and crossbows. Throw in a skill tree that lets you max out your damage, stamina, and health, and you have moment to moment gameplay that stays interesting despite the overarching pacing issues.

Furthermore, the driving is a lot of fun. Travelling across the dystopian world of Days Gone happens on a motorcycle. You'll customise your bike with nitrous, ride through all manner of terrain, and go after foes in exhilarating chase sequences that make up some of Days Gone's better moments.

All of this is punctuated by a fantastic looking game. From sprawling human settlements to the vast wilderness of its many forest areas, Days Gone is a great looking game. There's a sense of scale with hundreds of zombies roaming through the world in some of its story sections that make it feel unique.

After a giant 21.420GB patch followed by 13GB that brought the game to v1.04 performance was improved too with a smoother frame rate and quicker loading times compared to what it was prior. Patch notes were nebulous, simply accounting for these hefty file sizes as bug and localisation fixes.

This will be the case for those buying it on disc as well given how late this patch dropped. Disappointing when you consider that past Sony games like Uncharted 4, Spider-Man PS4, and God of War shipped in a polished state on disc day one.

That said, Days Gone is not as balanced as it should be. Without spoiling much, we found ourselves in boss encounters where despite having all the possible perks for the maximum melee damage, we weren't able to best them without resorting to reloading our save file to grab as much ammo and firearms as possible to get by. The game gives you little in way of flexibility even though the presence of a wide variety of skills and abilities suggests otherwise.

As it stands, Days Gone is a flawed PS4 exclusive that delivers less than what we've come to expect from an open-world game in 2019. There's fun to be had here, but it's layered with so much busywork that playing it feels like a chore more often than not.