Cuphead Is Possibly The Most Beautiful Game You Will Never Finish 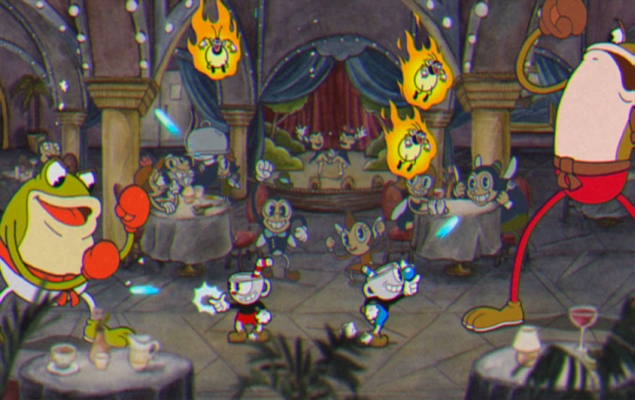 Despite its old-school Walt Disney cartoon-inspired looks, Cuphead is anything but beautiful. The characters look charming, sporting expressions and animations that remind us of simpler, care-free time, an era when TV used to be about Mickey Mouse and Bugs Bunny. The actual experience is a far cry from those days though.

At Gamescom 2015 We played the game at Microsoft's press conference and came back with our egos battered to submission. And we weren't alone. Everyone who played the game before us had trouble clearing a single level. None of them could. Neither did we. Much like titles such as Super Meat Boy and I Wanna Be the Guy, Cuphead is tough as nails, and that's great.

With gameplay in the mould of classics like Contra, you'll find yourself running and gunning from one boss or another when you're playing the game.

In most cases, you'd wish that you could progress by just running instead because there is so much to take in from the game. The levels are imaginative; one of them takes place in a bar like area, where you square off against a duo of frogs in boxing shorts. They merge to form a slot machine that spouts projectiles causing damage.

Sounds bizarre? This isn't the only one. There's a boss that's a carrot with creepy third eye, and a bird whose head flies through a house and hurls eggs (presumably its own) at you. There's no shortage of subversive elements that seem to exist for the heck of it. That is of course, until you knew the premise.

You don the role of the titular Cuphead, who literally has a cup for a head. Rather than having you run after a damsel in distress like the Mario games do, here, you have to repay a debt to the devil. In doing so you'll find yourself up against the aforementioned bosses, with the final game having around 30 of them. As you can tell, the sliver we encountered were next to impossible to defeat.

Cuphead's looks mask hard as nails gameplay. We'd go as far as saying that the looks keep you playing despite the tough gameplay. Throw in some slick animations ranging from adorable facial expressions of Cuphead, to the simple act of firing on an enemy (by pointing your hand as a gun of course) make this perhaps the most beautiful looking game you'll play. While we're sure there are methods to defeat each boss with pitch perfect timing and reflexes or a few cunning stratagems or simply a combination of trial and error and luck, it's safe to say that many of us won't go far in it. With the game expected on Xbox One and Windows in 2016, we won't have to wait long to find out just how little will be completed of this great looking title.