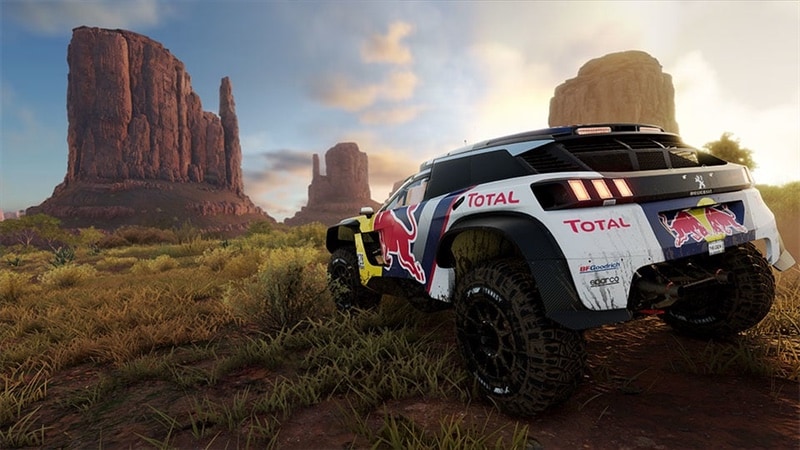 The Crew 2 for PS4, Xbox One, and Windows PC is an always-online arcade racing game from Ubisoft. It's come out four years after The Crew and it promises a huge world with a wide variety of vehicles and races. Not only does The Crew 2 feature standard street races, but it also has off-road racing, airplane stunts, boat racing, and much more. This game is set in the USA and it allows you to drive from coast to coast while participating in different events. The Crew 2 promises a lot but how much of it is available at launch and how good is it? We played the game to find out.

In the previous game, a weak story mode walked you through various types of races and forced you to play through all of them to progress. This time Ubisoft has divided the world into four different types of events — street racing, off-road races, freestyle, and pro racing. You can pick up events from any of these types of races at any time to progress in the game. You can unlock more events by gaining more fans and you can earn these by winning races or performing various stunts as you drive through the game world. This is linked to your popularity in the game. You start as a Rookie and can progress all the way up to the Icon level. Once you become an Icon, the game still lets you level up all the way to Icon level 999, perhaps just to reward you for persistence.

All races require a minimum popularity level for entry and that's how The Crew 2 makes you keep racing. The game gives you the ability to fast travel to races right from the start. This means you can completely skip The Crew 2's free drive mode, which as the name suggests, lets you explore every facet of the game world (from coast to coast, it's over 100km of in-game driving according to Ubisoft) and it takes around an hour even if you have a really fast car, which is surprising. We found ourselves just heading to the Activity tab in options and selecting races to get into because there's little else attached to the free drive mode in terms of progression and the environments you race through aren't the best looking.

Speaking of visuals, we have to praise The Crew 2 for amazing vehicle detailing although the backdrops weren't always the best looking. We did like some weather effects such as snow, but lots of in-game elements such as people, our character (while riding a motorcycle), animals, and the scenery don't live up to the same standard. The time of the day keeps changing in the game, which is a nice touch but it does little to make its bland vistas look beautiful.

During one such race, we found ourselves zipping through the countryside on narrow roads. We witnessed the sunrise in the game and that felt more like an annoyance than a beautiful scene that you want to admire thanks to the inconsistency in its visuals. This seemed especially tragic since other racing games' sunrise and sunset sections are usually the most polished and good looking to show off the best of what they have to offer.

This brings us to the controls and the driving experience in the Crew 2. We were a bit annoyed by the slightly floaty controls initially but we got used to it in a few hours. However, the wide variety of driving experiences on offer is one of the biggest plus points of The Crew 2. You can clearly tell the difference between a drift racing car and a drag racing car. The former is far more manoeuvrable while the latter can go well over 500kmph while being near impossible to turn.

Similarly, each class of vehicle feels different to drive and you will notice this even when you switch between two vehicles of the same class. We noticed this even with planes and motorboats. It's clear that Ubisoft poured in a lot of resources into the driving experience and it's safe to say that, for the most part, The Crew 2 has delivered on this front.

This is because the one area where The Crew 2 lags behind is the motorbike driving experience. We found the motocross bike racing aspect to be a bit too unrealistic. No matter how badly you crash, the rider will never fall off the bike in this game. The motorbike races feature some insane jumps but they're not anywhere near as well-designed as the other races.

Another area of improvement is The Crew 2's in-game navigation. Many of its races are on open roads where you could easily take a wrong turn and miss a checkpoint. The GPS in this game is in one corner of the screen and often we noticed the turn too late. Some kind of an on-screen augmented reality style navigation would help the game a lot. There are some closed circuit track races in the Pro Racing section of the game. We didn't enjoy these all that much because most of the tracks were a bit too wide even if the driving experience was great. Street racing and off-road events are The Crew 2's best races at the moment.

We really enjoyed performing some crazy stunts while flying planes. The sheer joy of flying your plane inverted at a low altitude, almost skimming the surface of the land or sea is thrilling and the freestyle races which let you seamlessly switch between boat, car, and plane has most of The Crew 2's wow moments.

This game doesn't have much in the way of a story so that allows you to focus on the racing. Each of the four classes of events does have a small story to keep you hooked. It's another variant of the same “rookie's journey to the top” that we've seen millions of times in racing games and you can safely ignore it and keep winning races.

Every time you win, you earn some parts upgrades for your vehicles. Parts are classified into common, rare, and epic categories with the names suggesting how effective they are. This aspect of the game doesn't appeal much to us and seemed redundant, as after a point we just ignored loot parts altogether and kept buying better cars for races.

The Crew 2 has two types of currency — Bucks and Crew Credits. Bucks is the virtual currency that can be completely earned in the game simply by racing. Crew Credits can be earned in game each time you raise your fame level, and you can also buy these with real money. We're not fans of in-game micro-transactions in full-price AAA games, but to be fair to Ubisoft, Crew Credits are completely optional. The game is generous enough with Bucks that we could easily buy one of the top three vehicles in each class within a few hours of racing.

With The Crew 2, there's one big question that we just cannot answer. Why is this game an online-only game? The moment the Internet connection drops, you're kicked out of the game. Ubisoft is pitching The Crew 2 as an MMO (massively multiplayer online) game but right now the multiplayer aspect is very limited. You can invite friends and explore the world with them in free drive mode or you can create a party of up to four for an online co-op session. The co-op mode allows you to attempt several challenges with friends and even if one person succeeds, everyone else in the party gets the rewards. For instance, we aren't very good at drifting so we could invite a friend to help us complete drift challenges in the game.

The big omission is PvP (player versus player) mode, which means you can't race against your friends. Ubisoft says it'll be ready in “Winter 2018” so you should get it as a free update by December. However, this mode is one of the biggest reasons for the game being online only, and if it's not ready at launch, we feel there's no point buying The Crew 2 right now. Its absence is perplexing when you consider The Crew had it at launch.

To be fair to Ubisoft, the company is known to fix its games and continuing to add features a long time after launch. With Crew 2, Ubisoft has promised a new discipline and a new feature every three months, apart from two new cars every month for the first year. You will see hovercrafts and “legendary” parts being added to the game in September and PvP mode by December. We suspect that the company will add police chases to the game too as it was spotted in one of the trailers, and was present in the first game. This is good to know, but we can only review what's there in The Crew 2 right now, and that doesn't seem like much, particularly given the fact you are paying the full price right now.

With the races that we played, we did like the fact that there's no handholding in this game. There's no rewind feature for you to go back a few seconds to rectify your driver errors. This challenges players to learn how to control vehicles in this game and kept us hooked to lots of races where we kept trying until we finished first. At the same time we did feel that the AI is a problem with The Crew 2. It doesn't scale as well as it could and does not maintain a consistent level of challenge through the duration of a race as we often saw our 8 or 10-second lead turn into photo finishes in a race's dying moments even at normal difficulty.

It's not as bad as the AI during police chases in The Crew which had the cops almost teleport at your location, but it's a pressing concern all the same. We also spotted a bug where traffic vehicles randomly appear out of thin air, which is baffling. Another minor quibble is that the horn is too quiet — it's not even louder than the engine sound.

Knowing how Ubisoft handled the launch of the first game, we think that by this time next year The Crew 2 could well be a completely different game. With more disciplines, a PvP mode, and a few bugs ironed out, The Crew 2 has the potential to be a solid alternative to the Forza Horizon series. At the moment though, The Crew 2 is incomplete, has no reason to be an always-online game, and doesn't give you much of a cause to explore its vast world. Even though its racing events and driving experiences are fun, The Crew 2 is not good enough for you to pay its full price. We have a strong suspicion that Ubisoft pushed ahead with the launch sans PvP mode because Forza Horizon 4 is literally on the horizon. Unfortunately, in its current state, The Crew 2 doesn't even threaten 2016's Forza Horizon 3.