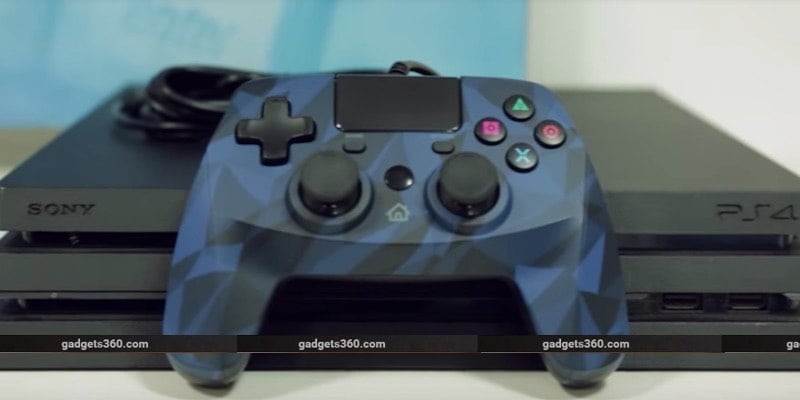 With the PS4 being India’s best-selling console (much like the rest of the world), you’d think there would be a big market for PS4 controllers in the country. This is far from the case though, as most controllers are pretty expensive. Unless you’re willing to spend around Rs. 7,000 to 8,000 for a premium grade controller from Nacon, or almost double for the Razer Raiju, which is listed on Amazon for Rs. 14,490, there are few choices other than Sony’s own standard PS4 controller in India. And that in itself has an MRP of Rs. 4,990.

Suffice to say, while the PS4 is a great console, buying controllers for it is an expensive exercise, and most of your choices cost more than a full-priced game. That is until now.

Snakebyte is a Germany-based company dealing in peripherals, which has an official Indian presence via local distributor, Origin - not to be confused by EA’s digital distribution service by the same name. One of its first products for India is the oddly punctuated Snakebyte Game:Pad 4 S. Despite its premium looks, the Snakebyte Game:Pad 4 S is the cheapest PS4 controller on the market right now. At an MRP of Rs. 2,990 and actually selling for Rs. 2,490, it’s essentially half the price of Sony’s DualShock 4 controller.

The Snakebyte Game:Pad 4 S comes in a cardboard box with some manuals and little else. A utilitarian first impression gives way to a controller that feels sturdy to grip. Though we soon realised it has smaller dimensions versus other PS4 controllers, which could pose as an ergonomic problem for some. That aside, the touch pad has a nice clicky feel to it and the analogue sticks that are easy to wrap your thumbs over. The latter is important, particularly in marathon sessions of first-person shooters where you’re dependent on analogue sticks. So far so good.

However, the triggers feel a bit off and the concentric d-pad isn’t as precise as we'd like. It’s at this point you realise where the costs were cut to keep prices down — with the feel of its triggers, d-pad, and yes, even the buttons. It is tough to shake off the sense of mushiness in the square, circle, X, and triangle buttons, and even Share and Options didn't feel crisp.

Despite the Snakebyte Game:Pad 4 S displaying actions with near perfect timing, it takes a while to shake off any perception of delay, despite being a wired-only controller. It simply lacks the feel and touch of the standard PS4 controller, let alone more expensive choices. But at Rs. 2,490, you’ll grin and bear it as you connect it to your PS4’s USB port.

Yes, if you were expecting a controller at 50 percent the price of a Dual Shock 4 to have wireless Bluetooth, you’re sadly mistaken. Thankfully, there’s a generous 9.8 foot cable to make up for it, along with a dual vibration motor that does a good enough job of mimicking what you get with more expensive controllers whilst pulling the trigger on a gun in games like Call of Duty.

Wireless features aside, other niceties you’ve come to expect are amiss as well. There’s no 3.5mm jack. So if you want to have your audio restricted to your ears alone, without disturbing those around you or simply prefer a more immersive aural experience, you’ll probably need a separate audio solution like the PlayStation Gold headset. It’s a perplexing omission and something we hope Snakebyte rectifies with the next iteration of the Game:Pad 4 S.

These concerns notwithstanding, the Snakebyte Game:Pad 4 S is still not a bad choice. In our time checking out Street Fighter V we never found ourselves at a disadvantage, being able to pull off fireballs at will, thanks to the circular d-pad. In shooters like Overwatch, we were able to trigger attacks and ultimates with ease once we shook off the feeling of its mushy buttons. Driving games like Gran Turismo Sport and Driveclub worked as they should as well, allowing us to brake, turn, and speed past opponents as if we using a standard PS4 controller.

But questionable button feel, the lack of wireless Bluetooth, and a missing headphone jack aren’t the only issues. It’s important to note that the Snakebyte Game:Pad 4 S isn’t an officially licensed Sony product. What this means is - aside from keeping its price low as the company doesn’t have pay Sony any licensing costs - Sony isn’t obliged to ensure the controller works with future software updates to the PS4. Nonetheless, in the event of this, Snakebyte promises updates via its website to rectify any concerns. For what its worth, the Snakebyte Game:Pad 4 S ran fine on a PS4 Pro with the 5.05 update despite being officially compatible with the PS4 5.01 update.