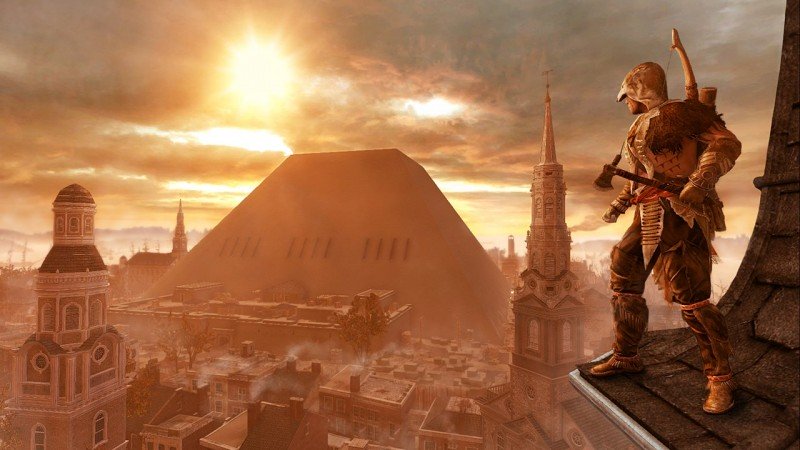 Set in ancient Egypt, the game has you donning the role of Bayek. He’s a medjay, sort of like a sheriff, tasked with protecting the interests of the Pharaoh and the common man. As you would expect, Assassin’s Creed Origins’ plot is one of revenge and retribution. This is familiar ground for Ubisoft, with past titles such as Assassin’s Creed 2, Watch Dogs, and The Crew using the same tropes. There’s some interesting bits of dialogue and a couple of amusing characters such as the librarian Phanos, but by and large, Assassin’s Creed Origins’ story is but an excuse to traipse across a sprawling open-world.

And as is typical for Assassin’s Creed, there’s also a meta-plot taking place in the current time period involving the animus - a series staple that allows one to relive the memories of their ancestors and the company behind it, Abstergo. Without spoiling much, these segments are handled a lot better than previous titles, where it sometimes felt like an afterthought. There’s a welcome amount of lore in the form of emails, notes, and audio logs that do a good enough job to keep you equally invested in these parts of the game.

Regardless of the era you are in, Assassin’s Creed Origins is visually stunning. Be it taking a boat ride along the Nile at dusk with the rays of the setting sun reflecting on the water, or the intricate details of Egyptian temples, the environments are the game’s highlight. From the cities of Memphis and Alexandria, to the temple town of Yamu, there’s a lot to take in and all of it is aesthetically pleasing.

The same attention to detail extends to character models of its main cast such as Bayek and his wife Aya. Sadly, some of the antagonists and supporting cast don’t receive an equal level of polish, and appear plain in comparison. This applies to the game’s many non-playable characters (NPCs), who seem similar to one another after awhile.

Nonetheless, on the PS4 Pro, Assassin's Creed Origins looks gorgeous for the most part. The frame rate is solid, and even in busy moments we didn’t face any issues. One niggle is that there aren’t any toggles to choose between better visuals or frame rate, similar to what we’ve seen in other games like Shadow of War. However, this doesn’t harm the experience too much, because Assassin’s Creed Origins gives you a lot to do.

Through the 30-odd hours it’ll take you to play through Bayek’s tale, you’ll rescue books for old men from bandits, square off against warriors in religious festivities, and even destroy spurious goods. This, of course, is apart from the main quest line. You may be thinking that the aforementioned activities are optional, and that’s how they’re labelled by the game, but that's not really true.

This is because Assassin’s Creed Origins (much like Destiny 2) compares your progress and experience to your enemy at any given time, including a main story quest. If your enemies are marked in red, they’ll be tough to beat and you’ll find yourself embarking on many a side mission to level up. You can try your luck anyway, and we discovered that if you plan your approach well enough - opting for stealth and ranged attacks - success is guaranteed. The game did get a day one patch to address gameplay balance, but it still feels a bit out sync, considering how easy it is to complete certain objectives even if the game thinks you’re under-levelled.

This brings us to Assassin’s Creed Origins’ gameplay, or rather, the flexibility on offer. Combat is a lot more nuanced compared to past games in the series, with three styles to choose from. You can pummel foes to submission with a variety of hammers and swords, take down soldiers from afar with a bow, or simply slink around and knock your enemies down while in stealth.

Sounds simple enough? Not quite. You see, combat in Origins is hitbox based, allowing you to pull off headshots and accurate body blows as needed. Unlike past games where combat felt like a stiffer, more deliberate version of the Batman Arkham titles, Assassin’s Creed Origins has you using R1 for quick attacks, R2 for shieldbreaking hits, and the L1 button to use your shield. You can even attack when on a camel or a horse, and parry or charge up your hits for more damage.

All of this results in a system that has more in common with Dark Souls than Witcher 3, and the feedback with each kill feels satisfying. This is particularly true when using a massive hammer in combat to smite your foe. It’s one of the game’s biggest changes, and the most obvious improvement compared to past entries.

Using a bow and arrow is similar to other games, with not much to write home about, while stealth works like it did in past entries, but borrows from Metal Gear Solid 5: Ground Zeroes and The Phantom Pain in the sense that you have a brief window to react and take down your opponent if you’re spotted.

Plus there are a ton of weapon and gear customisations as well as a skill tree, allowing you to customise Bayek to suit your playstyle. More often than not, we resorted to ranged and stealth - taking down soldiers from afar or quietly, thinning the numbers before opting for out and out combat with poisoned weapons that cause continuous damage after a single hit. Unlike past games, it’s tough to take out more than two enemies at the same time with an axe or a sword, as you tend to get swamped by the opposition, making slinking around a necessity.

In our time with Assassin’s Creed Origins, we didn’t notice any game-breaking bugs. However, we’d be remiss to say it’s flawless. We noticed minor glitches when climbing up a tower and hanging off a ledge, rearing their head on the rare occasion.

Apart from this, Assassin’s Creed Origins has micro-transactions, much like a slew of big budget console games this year. These allow you access to better gear, unlock abilities faster, and obtain in-game currency. They aren’t as bad as Forza 7, and are relegated to their own corner in the game’s many menus, and we didn’t feel the need to use them to progress, but the mere presence of these will be off-putting to some.

We discuss Assassin's Creed Origins in-depth on Transition - Gadgets 360's gaming and pop culture podcast. You can subscribe to Transition via Apple Podcasts or RSS or just listen to this episode by hitting the play button below.