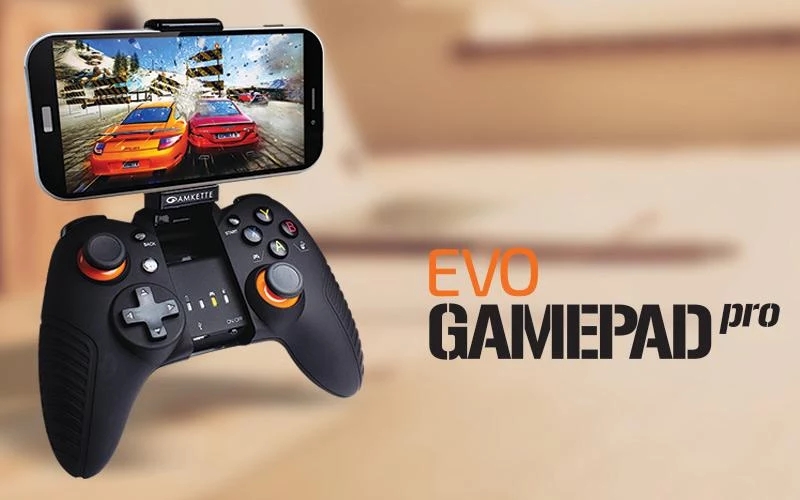 Amkette has, over the years, been rolling out a number of stylish looking mobile products, starting in 2012 in with the Amkette Evo TV, which was updated and released last year as the value-for-money Evo TV MC. The company has also released a number of wired and wireless headphones, as well as a Bluetooth speaker. Now, it's released the Amkette Evo Gamepad Pro, a Bluetooth gamepad for use with Android devices, available only on Flipkart, at Rs. 2,799.

Like Amkette's other products, the Evo Gamepad Pro is a good looking gadget. The button layout, and the placement of its analog sticks appears to draw on the design of the Xbox 360 gamepad, with two analog sticks, a four-way direction pad, four face buttons, two shoulder buttons, and two triggers, along with home, back and start buttons.

There's a flip out section in the middle, which can be opened to serve as a stand for your Android phone. Lifting the cover also reveals the battery light, along with the two indicators for the Bluetooth mode, the Micro-USB port to charge the battery, and an on-off toggle switch. We full charged it five days ago and we haven't had the need to charge it since despite clocking in around eight hours of gaming between then and now. 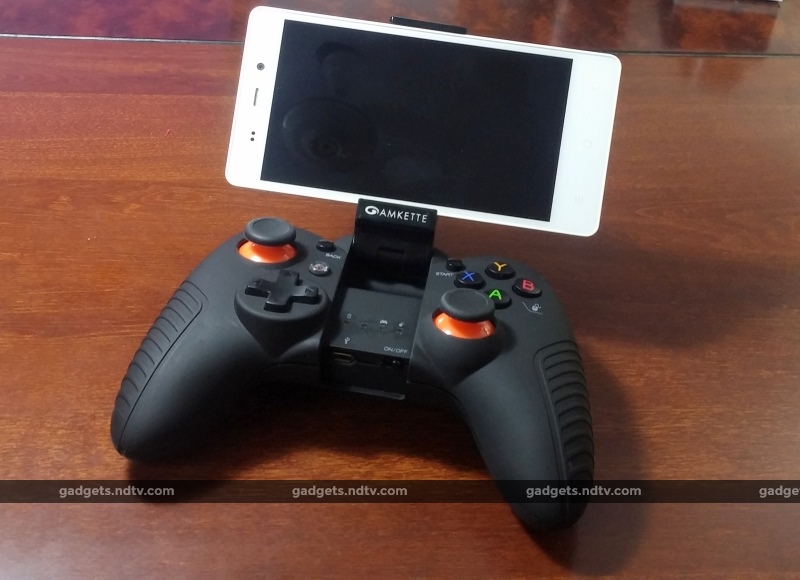 The sides of the gamepad are lined with small grooves, which provide a nice grip that doesn't get uncomfortable over a long gaming session either. The orange accents under the sticks look nice, while the buttons and triggers all feel very rugged and enjoyable to use. The one issue we had with the design is that the clip for our phone didn't always lock in place properly, which can be an issue when gaming.

Setting up the gamepad is pretty simple - just power it up and keep the home button pressed for a few seconds, and it goes into pairing mode. To make the process even simpler, you should download the Amkette Evo Gamepad Pro app from Google Play; start the app and it shows you a handy blueprint showing you where all the buttons are.

The same app also includes a list of games that are compatible with the Evo Gamepad Pro, so you can find and install games easily. If you've already got some of the games installed, those will also show up in the "Installed" tab in the app. It's pretty similar to what Phonejoy did for its gamepad, which launched in April last year, and this app makes it much easier to find the games you want.

Where things fall short, unfortunately, is in the actual gaming with the Amkette Evo Gamepad Pro. That's because the compatibility with different handsets is a bit of a hit and a miss.

When it worked fine, we really liked the Amkette Evo Gamepad Pro. We were reviewing Pac-Man 256 and really enjoyed playing the game using this controller. Beach Buggy Blitz and Tabletop Racing both were a lot of fun to play using this gamepad, as was Dead Trigger 2, though the latter required a fair amount of time to be spent customising the controls. But there were some other games which were a disaster.

For example Meltdown, a twin stick shooter which is one of the featured games in the Evo Gamepad Pro app - recognised all the controls, but only on the settings page. With Meltdown, we could either shoot or aim. Another featured game that had issues was BombSquad. There, the settings page allowed us to assign different buttons to run. Once the game started, none of them worked. We had none of these problems with the Phonejoy.

UPDATE: After this review was published, Amkette contacted NDTV Gadgets to verify the concerns which we had highlighted. After some testing, Amkette was able to verify that the issue was due to a firmware problem on the unit which had been provided for review. We have since tested fresh units of the Evo Gamepad, and faced no compatibility issues. Amkette has told NDTV Gadgets that in case of any issues with a customer's Evo Gamepad, it will provide an on-site software update to fix the error, and further, claims that it detected this problem before the retail units were being packaged, so the likelihood of people facing issues is limited. If you purchased this gamepad and are facing any compatibility issues, we strongly advise you to contact Amkette immediately.

Despite some issues with the first unit we reviewed, we still like the controller - the design and build quality is pretty good, and the price isn't bad either. And if it works well with your Android device, then we think this is a pretty good gamepad; it's easy to imagine someone with an Evo TV buying this gamepad to play Android games on their TV.

Whether you're trying to experience retro remakes, or playing some of the newest Android games that support controllers, there are a lot of fun experiences to have if you're a gamer. As gamepads become standardised and affordable, we're hoping that Android gaming will finally take off.

The Amkette Evo Gamepad Pro released today, and is available only on Flipkart at Rs. 2,799. We received a review unit which we used for a week before writing this.