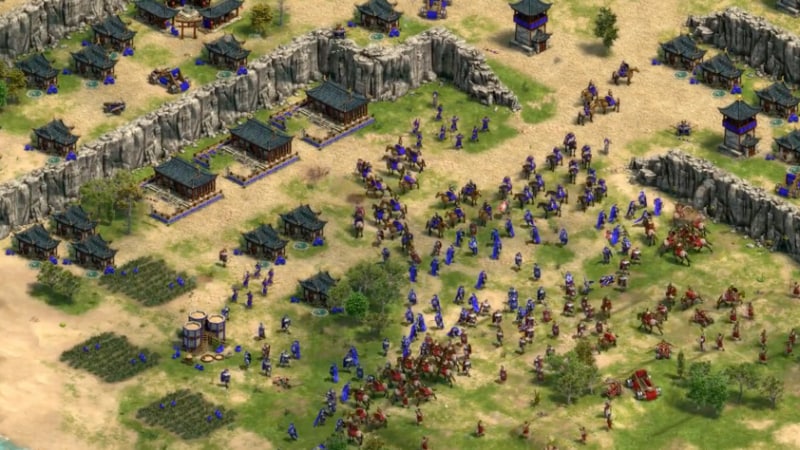 Microsoft's renewed focus on its pathbreaking strategy game series Age of Empires has led us to Age of Empires: Definitive Edition. It's a remastered version of the first game in the series and that means you get to relive some of the most important battles between the Stone Age and the Iron Age. The Definitive Edition includes the base game and the Rise of Rome expansion, has multiplayer support, and it's a Windows Store exclusive.

If you're a nostalgic fan, Age of Empires: Definitive Edition has pretty much everything you could ask for. The game has all the campaigns of the original, which have been reproduced with remastered sound and visuals. It supports local and online multiplayer with up to eight players. It also has a scenario builder mode where you can create your own battles. In fact, much of the game feels like the developers have painstakingly tried to stay true to the original.

That's why Age of Empires: Definitive Edition feels a lot like fan service, which will please those who've played the first three games in the series. With a fourth Age of Empires title currently in the works, there's a lot in store for those who still lament the closure of Ensemble Studio (which first developed Age of Empires).

Age of Empires: Definitive Edition's single-player campaigns are set in ancient history, with most of the scenarios set well over 2000 years ago. Campaigns are set in Asia, Africa, and Europe, so you could be charting the course of Alexander the Great's conquests, reliving some of the battles fought by Julius Caesar, or fighting battles in early Japanese history.

These campaigns are challenging even on lower difficulty levels because many a time you'll encounter a scenario where you control only one or two units at the beginning. This is meant to give you an idea of how some of these empires were forged, and it succeeds in doing that. We really enjoyed returning to some of our favourite campaigns from this game, such as The First Punic War, Yamato Empire of the Rising Sun, and Glory of the Greeks.

If you look at Age of Empires: Definitive Edition as a game built to evoke nostalgia and recreate everything that's great about the original, then you'll probably find nothing wrong with this game. However, the RTS genre of games has evolved a lot since Age of Empires hit the limelight. Age of Empires II itself is a far better game than its predecessor as it introduced some great features such as gates, so you could build a fortress and let your armies move in and out with ease. There are also minor annoyances such as having to manually rebuild farms when they expire, which were fixed in Age of Empires II.

Beyond that, the RTS genre evolved beyond gathering resources and spamming units to win battles. Age of Empires has always been about hoarding resources, creating large armies, and going to war. However, the genre has some fantastic examples such as Command and Conquer and Company of Heroes that focus far more on tactics than resources. While Age of Empires: Definitive Edition may not be the game that's expected to revive RTS games, Age of Empires IV has its work cut out.

What Age of Empires: Definitive Edition gets right is visuals and soundtrack. When you look at units and buildings in this game, you'll realise that the developers have put in a lot of effort into making them look great. The animation for buildings being destroyed is very well done and we couldn't stop admiring the detail in the Wonder for every civilisation. Unfortunately this detailing doesn't extend to units created via Age of Empires' cheat codes. The terrain and water don't look as great as the buildings, but if we were to guess, that's probably an intentional design choice rather than an oversight. The soundtrack is one of the highlights of the game and blends in very well with the theme of the campaigns.

We did notice some bugs in Age of Empires: Definitive Edition, particularly when moving units from one location to another. Sometimes units would just get stuck and circle around in one place before eventually joining the rest of your army. Once, a transport ship got stuck near the dock and just wouldn't move even though there was water all around it and nothing blocking its path (RIP the two villagers who were stuck inside). You can also go over the population limit sometimes by creating multiple units in different buildings when you're close to reaching the limit. This may have been left in intentionally (as it was possible in the original), but it qualifies as a bug nonetheless.

These weren't major issues, but we do miss some of the things that made us like Age of Empires II so much. Battle formations are completely missing in Age of Empires: Definitive Edition. That means your armies look like a ragtag band of thugs rather than a squad of disciplined veterans. The storytelling in this game is sub-par too. The same voice narrating a paragraph of the story before and after each battle is just not enough to get people into the campaign.

Even within the game, there are no voiceovers when you trigger certain key events. For instance, in the final battle of The First Punic War, you can find a squad of Phalanx units in a far corner of the map. If that had just triggered a voiceover to say why they were joining the Carthaginian army, the scene would be so much more effective. This is a major reason why we couldn't connect with the campaigns in Age of Empires: Definitive Edition as much as we did with Age of Empires II.

We expected this kind of experience where the story doesn't matter all that much in the multiplayer section of Age of Empires: Definitive Edition, but the single-player campaign deserves better. However, we must note that the developers have chosen to stick to the original game as much as possible, and perhaps these improvements weren't on the agenda.

Speaking of multiplayer, our experience with that part of the game was similar to what we saw during the closed beta. Most of the servers we found were based in Europe or the US, which means that the game was barely playable on our Internet connection. This could change once the game is widely available, but for now it is a point of concern. As for local play, if our experience during the closed beta is anything to go by, that's going to be a fun experience overall.

Age of Empires: Definitive Edition succeeds in its goal — giving fans of the series a painstakingly remastered game that is faithful to the original. However, we feel that players would've been better served with improved storytelling. That said, we did enjoy playing this game a lot and found it easy to play for hours on end. If you're an Age of Empires fan, this game is a must-have. For newcomers, Age of Empires: Definitive Edition is going to be a mixed bag.

Age of Empires: Definitive Edition is available via the Windows store at Rs. 574 ($20 in the US). We played a review copy provided by Microsoft.