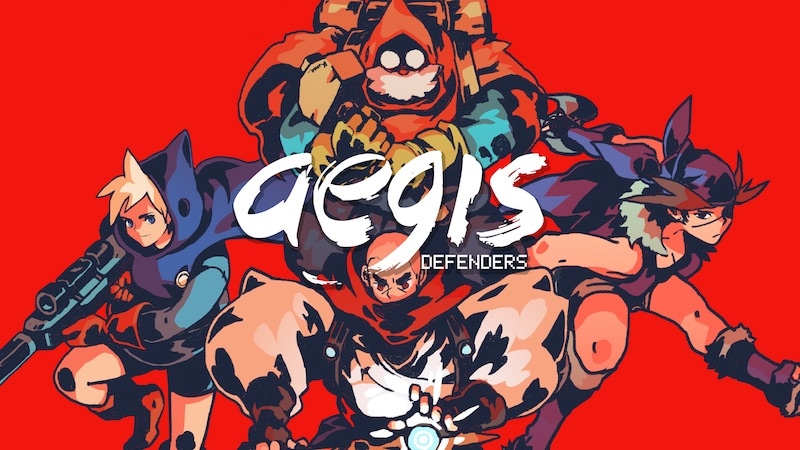 The Nintendo Switch has seen its fair share of indie titles and Aegis Defenders is the latest one. Developed by the fantastically named Guts Department, and published by Humble Bundle (yes, the site responsible for those popular deals on games), it's an intricate mix of action platforming and tower defence that has a retro16-bit aesthetic harkening back to the time when Sega made consoles. Plus there's cooperative (co-op) play as well. That might seem like an awful lot for game to pull off, particularly one that begun its life as a Kickstarter campaign from a team of students, and so we were keen to check it out.

Aegis Defenders' story takes place in the world of Elam. The game is steeped with lore. From the deathless — gods that rule over humanity — to hordes of beasts, and its many ruins to explore, there's a lot going on. Each chapter is punctuated by cutscenes that resemble what you'd expect from 16-bit classics like Chrono Trigger or The Legend of Zelda: A Link to the Past, which unfold the narrative and does a good enough job of keeping you invested. All of it is drawn in a hand-painted pixel art style. Granted, we've seen similar treatment in games such as the Skatelander (being developed in India), and hits like Hyper Light Drifter, but Guts Department manages to instil enough variety that you never quite feel that you've seen this before. From its rocklike monsters to sprawling caverns, every inch of Aegis Defenders feels fresh.

While it scores handily in the looks department, the gameplay holds up too. As you traverse through its 10 hour campaign, you'll encounter a motley crew of heroes to control during your journey. From the firearm-wielding Clu, to the thieflike Zula whose arsenal includes bombs and shurikens, you'll find yourself switching between heroes ever so often. Each of them have their own unique playstyle, so for example one is Bart — an engineer who can repair nearby structures, and another hero is Kaiim — a monk who can use his special abilities to solve puzzles.

The difference that each hero's play style offers also comes in handy playing into the core gameplay loop. Each chapter of Aegis Defenders has you exploring an area, solving light puzzles as you go along, which sees you switching between heroes to stand on platforms that let you open doors, or using their abilities to progress further. Inevitably you'll reach a point where you'll have to defend an area, and rotating between each of the heroes comes in handy. More so when you consider that in Aegis Defenders, each enemy is colour coded to your hero. What this means is, some heroes will do more damage than others to specific enemy types. During the defence section of a stage, you'll find yourself picking one over the other to make the most of this. Although you'll be building turrets or setting traps, those heroes not under your control will also go about trying to stay alive and keep the horde of monsters off your back, which they do fairly well as we've rarely had to come to their aid.

In between these heady bouts of platforming, puzzle solving, and defence, you'll get to know your squad a little better by partaking in conversations. Depending on your answers you'll get greater insight into the world of Elam and perhaps gain relationship points — currency that allows you access to better items to craft to aid you as the game progresses.

Throw in presentation that looks great and plays smooth on the Nintendo Switch in docked mode as it does in handheld, and you have a competent addition to the Switch's burgeoning library. Except for one detail - co-op play.

In our time with Aegis Defenders, we noticed some issues with co-op play. At times one player would be unresponsive while choosing what to build while certain scenarios saw unending waves of enemies come long after they were shown to be terminated. While Humble Bundle has confirmed that a patch is on the way, it won't be live till next week. This is something to keep in mind if you plan on playing it on the Nintendo Switch. The Steam and PS4 versions of the game don't suffer from these issues we've been told. Minus its co-op niggles, Aegis Defenders pulls off its ambitious gameplay mechanics with ease. All of its elements, while seemingly disparate, end up working quite well together giving Aegis Defenders a sense of cohesion, making it a quirky, engaging game worth checking out.

Gadgets 360 played a review copy of Aegis Defenders on the Nintendo Switch. The game is available now for the PS4, PC, and Nintendo Switch at $20 (Rs. 1,285).