A Legend of Zelda Noob Took on Breath of the Wild. What Happened Next Is Hilarious. 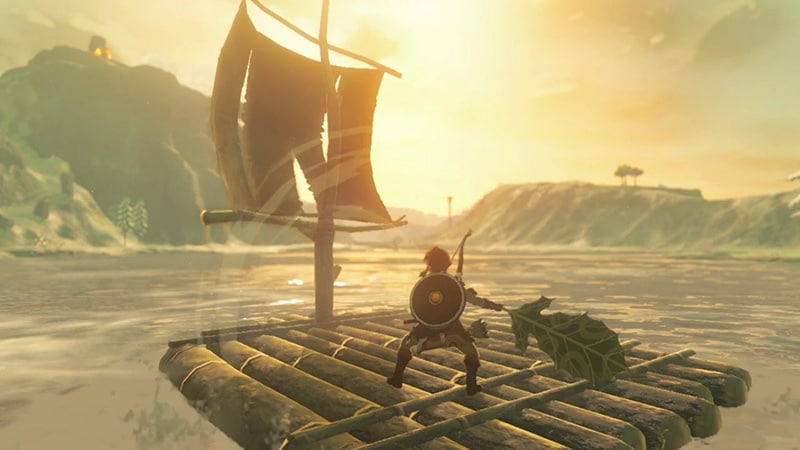 As someone who's never played a Zelda game before, I'd been looking forward to The Legend of Zelda: Breath of the Wild ever since the Nintendo Switch launch event. It's an open-world role-playing game - just the kind of genre I like.

Unfortunately, Nintendo consoles haven't really been easily available in India, and I didn't want to buy a console without warranty. That means I've never played Zelda games until now. This time, with a Nintendo Switch in office, I finally got a chance to play Zelda, and so Breath of the Wild has been my introduction to Link and company.

Breath of the Wild's abrupt opening sequence itself had me hooked to the game immediately. It simply shows the lead character Link waking up from some kind of cryostasis with a mysterious voice guiding him. It doesn't have the intensity of The Witcher's prologue, but sometimes not revealing much at the beginning can lead to an experience that's just as rewarding. Once I stepped out into Hyrule armed with nothing but a tree branch — yes, saving the world in underpants instead of fancy armour is possible —I was sucked into the game.

While other open-world games insist on leading gamers on through a tutorial segment, in Zelda, you're given relatively less hand-holding. At its very worst, it employs a series standard trope, panning the camera to lead players towards their destination. It's a bit annoying for grizzled open-world veterans like myself, but that's the slight guidance some players will need. There's very little that's actually explained and tutorials are handled by boxes of text explaining how actions like switching weapons work. You're free to figure out the rest and that is a fun experience. I let out a loud cheer when I noticed that you can use environmental objects such as boulders to attack enemies, instead of walking up to every single foe and trying to smash them with weapons.

When done right, open-world games let you can do practically anything you want in whatever order you like — Morrowind comes to mind as an example of this - and it's nice to see Zelda forsake any attempt at linearity for absolute player freedom from the get go. Even though the game gently nudges you on how progress at the very outset, it doesn't chide you for ignoring it. You can head in the opposite direction and get steamrolled by strong monsters. I did just that and got killed multiple times by monsters, until I finally figured out a way to defeat some of them, by keeping my distance and the bow and arrows.

When those broke — yes, weapons have durability, which means much like the performance on last year's Android flagship, they don't last forever — I resorted to throwing assorted pots, which is supposed to work well as long as you can aim right. As it turns out, I'm very, very good at missing the target when throwing pots. So a lot of my time was spent running away from monsters and in the process I discovered that you can just pray at an altar to make the enemies forget you exist. That was a rare logic-defying moment I encountered early in the game.

By the end of my first gaming session, I had acquired some skill with the bow and arrow and started landing critical hits to take out enemies — reducing my dependence on ancient Hyrulean earthenware. Even though I totally missed the axe that you can pick up right at the beginning, I found a sword and shield down the line, and became somewhat proficient at defending my character - Link.

The other great thing about Breath of the Wild is its soundtrack. That makes exploring the world without even interacting with anything enjoyable. It may appear as though the graphics are not as good as the latest AAA games, but Zelda's art style is something you can't compare with those games. I was very impressed with the art style of the game, and spent quite some time just looking at the vistas, and various objects and characters in the game.

This is exactly why I love Breath of the Wild — it marries the charm of the franchise with stellar production values and a wealth of detail along with contemporary open-world fare. It's also executed in a fashion to grant maximum freedom from the first time you play it.

How The Legend of Zelda: Breath of the Wild Was Influenced by Skyrim, Witcher 3, and Far Cry

After a tough day at work, you can unwind by casually strolling about in the Zelda universe without really picking up a quest. I did that by lurking around goblin-like monsters. I found one of these at an outpost and took great pleasure in landing critical hits via archery about half a second before the monster could alert its friends. Nintendo has apparently designed the game so you can attempt the final dungeon and its boss with none of the powers and weapons you get during the course of the full story. If I have my way, we'll eventually find out how true this is, underpants intact.

The Legend of Zelda: Breath of the Wild is one of the best games available on the Nintendo Switch, even if that isn't saying much, considering how few games are available right now. Based on the (admittedly little) time I've spent playing the game so far, it appears to be as good a role-playing game as any I've ever played.

It may have familiar elements that we see in every RPG, but that doesn't mean you shouldn't play this game. I've got a long way to go if I'm to finish this game (especially with my playing style) but I can already tell that I'll enjoy every moment of it.

We also discussed our experiences with The Legend of Zelda: Breath of the Wild on Transition, Gadgets 360's gaming and pop culture podcast. You can subscribe to Transition via iTunes or RSS or just listen to this episode by hitting the play button below.