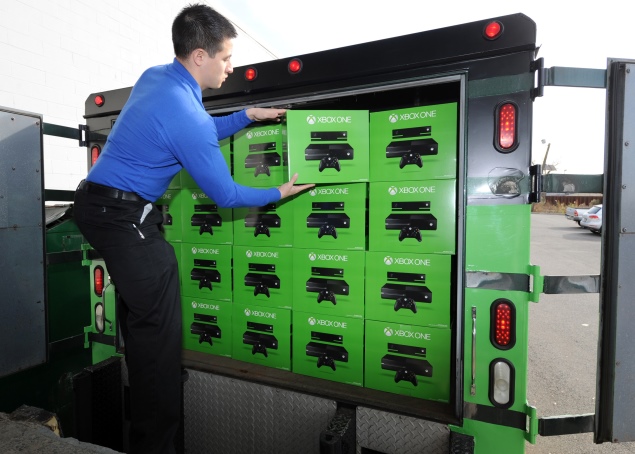 The Xbox One, on sale in 13 countries, is selling quicker than its predecessor, the Xbox 360, and is sold out at most retailers, said Microsoft Xbox spokesman David Dennis.

"We're manufacturing as fast as we can" to replenish supplies at stores during the holiday season, Dennis said.

The Xbox One (Review), priced $499 in the United States, and PS4, priced $399, offer improved graphics for increased realism and faster processors permitting smoother play, as well as numerous exclusive games.

"Being even is a win for Sony," Benchmark Co analyst Mike Hickey said.

Sony's pitch that its PS4 is a gamer-centric device has successfully attracted game enthusiasts and "that will show in market share moving forward," Hickey said.

Microsoft hopes the new Xbox will become the entertainment hub in living rooms, not only enticing gamers but appealing to a broader consumer base of TV fans and music lovers with its interactive entertainment features and media applications. It has been pitching its Kinect motion sensor camera, Xbox-only titles like "Ryse: Son of Rome" and features that allow hands-free control of television sets to differentiate its device.

Robert W. Baird & Co analyst Colin Sebastian in October said he expected global shipments of 2.5 million to 3 million consoles for both the Xbox One and PS4 in October-December. Both consoles sold over 1 million units in their first 24 hours after going on sale.

Investors are keeping a close eye on sales of the two next-generation consoles, which arrived after a gap of eight years. Analysts say they could reignite the video game market, which struggled with flagging sales for over a year until this fall when it began seeing a gradual uptick in revenue.

Strong launches of both consoles were a good sign for the industry but it was too soon to forecast where the market was going to shift, said Benchmark's Hickey.

Despite robust initial demand, "it remains to be seen how much mainstream consumer demand will unfold," Baird & Co's Sebastian said in a recent research note.

Microsoft shares were down 1.3 percent at $37.60 in afternoon trading on Nasdaq.

The FBI can control your webcam without switching on its light: Report
South Korean court rejects Samsung's 'ridiculous claims' against Apple