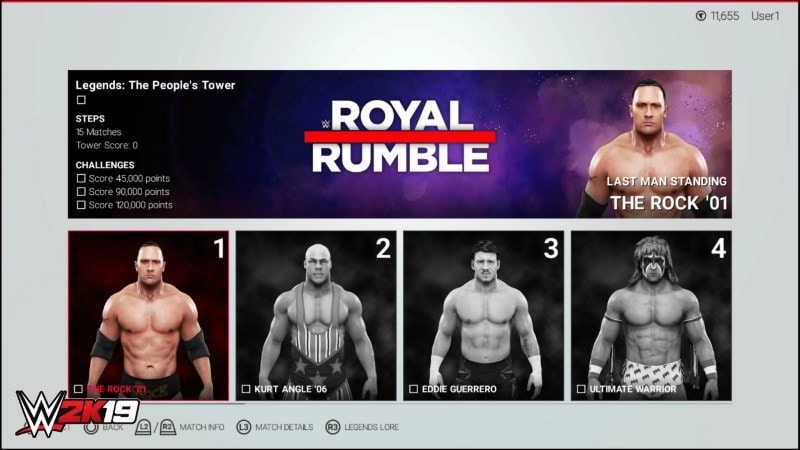 WWE 2K19 will have a new game mode called "Towers", in which you'll compete against a string of WWE Superstar opponents, the game developers announced Tuesday. Each Tower will have its own theme, roster of stars from NXT to Legends, different win conditions, and some limitations.

The new Towers mode in WWE 2K19 will have two types of play: Gauntlet, which has to be completed in one session without quitting early or a loss; and Steps, which can be played one match a time at your own pace. Match types will include Steel Cage, Table, Submission, Iron Man, and Falls Count Anywhere, among others.

While some Towers will simply be about making it to the end, others will require you to hit specific scores, with limitations including player and opponent buffs such as "starting a match with a finisher or an event starting with health in the red".

There are a few variations to the Towers mode as well. In "2K Towers", each tower will have its own unique theme that highlights the roster or "pays homage to a specific match type". 2K Towers will also have a feature called "Legends Lore", which will highlight the history and accomplishments of WWE Legends in the game.

In the "MyPlayer Tower", you'll get to use your created player to compete for permanent and timed events, with your statistics counting towards pay-per-view (PPV) events and Road to Glory qualifications.

The final variation is modelled around the game's cover star A.J. Styles, who's getting his own customised Tower mode called "AJ Styles Million Dollar Tower", which has tougher opponents, higher difficulties, and no health regeneration.

It also links into an esports contest. First, you've to complete the challenge on an Xbox One or PS4, and submit a "promo video" showcasing your achievement. If you're picked, you'll get to compete alongside other winners – and eventually AJ Styles himself – at WrestleMania 35 in New Jersey in April next year.

WWE 2K19 is out October 9 on PC, PS4 and Xbox One, with four-day early access for premium buyers.