Will your PC turn into a gaming console with Xbox Games on Windows 8? 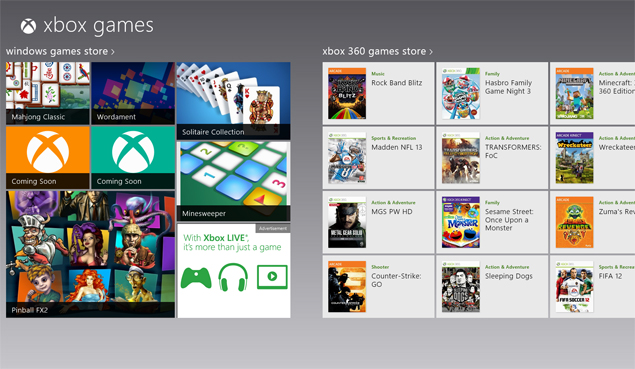 Will your PC turn into an Xbox console? That's just wishful thinking, so snap out of it! Microsoft has every intention to keep the console very much a part of your living rooms. So what does Xbox Games on Windows translate into? In simpler terms as quoted by Ars: "The best way to think of the Xbox Games on Windows is as a PC-based version of Xbox Live Arcade."

This means that only select Windows 8 titles will be Xbox-branded games. They will be available via the preinstalled Windows 8 Xbox Games app. Further, all Xbox Games on Windows 8 will have Xbox achievements, and many will also take advantage of other Xbox features, including leader boards, multiplayer modes, connecting with friends and more.

Other non-Xbox games will be available through the Windows 8 store. So, the software giant will support two distinct gaming sections in Windows 8, one that is Xbox-branded and the other which is not.

The future for Xbox Games on Windows is headed towards cross-platforming, where gamers will be able to play, pause and resume games across Windows and Xbox devices. As part of their initial strategy, Microsoft plans to include cross-platform integration in a few games. Developers like Zen Studios and 17-BIT are already trying to implement it. Certain titles will be mouse and keyboard optimised for desktops or laptops and also offer touchscreen and gyroscope support for play on Windows 8 tablets.

The company also plans to introduce free-to-play games monetizing through ads or add-ons. For instance, the Microsoft Solitaire Collection,  will include puzzle-like daily challenges that are playable only after viewing a video ad.

All-in-all, as of now, only select Xbox games will be supported on Windows 8, nothing more, nothing less. As for the company's next-gen console, it will have to be based on Windows 8 if these current plans are to materialise. Whether or not the list of games will become longer, is something that we'll have to keep an eye on.
Comments