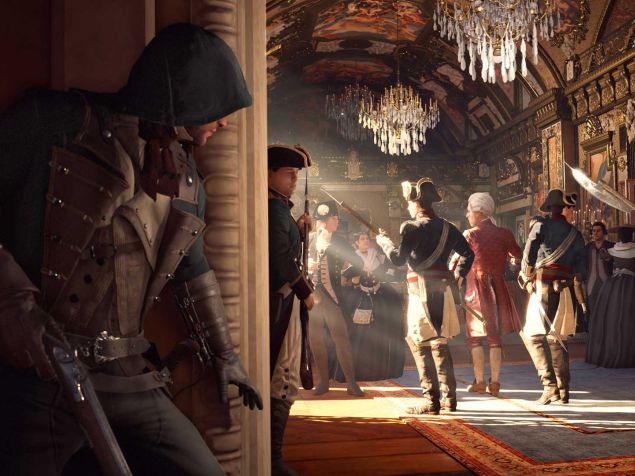 At its pre-E3 2014 media briefing on Monday, Ubisoft announced a slew of new games and showcased new trailers for some other games that have already been shown to the world. The games included Far Cry 4, Just Dance 2015, Tom Clancy's The Division, The Crew, Assassin's Creed Unity, Shape Up and Rainbow Six Siege.

The very first game trailer that Ubisoft showed was of Far Cry 4, a game that has been amidst a controversy surrounding the game's box art and accusations of racism. The controversy notwithstanding, the trailer showcased the villain for the first time. While we think that he is no patch on the menacing and psychotic Vaas from Far Cry 3, he definitely looked very angry in the trailer. Our readers would be glad to know that the game is set in the fictional country of Kyrat and the inhabitants (only soldiers for now) speak in Hindi and there was some gratuitous swearing too. The world is filled with vegetation and well-realised from what we could see in the trailer.

For those who like to shake a leg at parties, Ubisoft has a solution in the form of the new Just Dance 2015. What's better is that this new game has a feature called Just Dance Now, which allows online gaming using multiple devices. An Ubisoft executive said that there is no limit on the number of players that can play the game at the same time and also promised latency free gaming. Aisha Tyler, an Ubisoft staple (recently she was seen as an NPC in Watch Dogs), presented the game to the audience. Ubisoft had a ton of dancers who danced to Lady Gaga's Applause on stage and around the conference arena. They looked like professionals, though.

A game that has us super excited is Tom Clancy's The Division. It looks unbelievably realistic and futuristic. However, after the Watch Dogs graphics fiasco, we'd much rather keep our expectations in check. In the gameplay trailer that Ubisoft showcased at E3 2014, the protagonist along with his team members is inside an underground subway station filled with dead bodies. There is a cool mechanism which displays a holographic flashback of the same dead people before a train accident. As soon as they exited the subway, there was a frantic gunplay with destruction all around but it looked too generic.

Aisha Tyler came back on stage to show a new trailer of Ubisoft's racing game The Crew. This was probably the most underwhelming demo of the lot with a fast-forwarded video of a car going around town with a cool indie house track running in the background. It has been scheduled to release on November 11 for PC, PS4 and Xbox One. There were no more details presented.

The most anticipated trailer and Ubisoft's flagship franchisee, Assassin's Creed Unity showcased co-operative gameplay feature for the first time in an AC game. The NPCs crowded the screen in the demo, set in Paris, and looked well-detailed too. This is the best looking AC game of the lot and looks like it is going to feature more blood too.

Ubisoft went on to announce a fitness game for the Kinect called Shape Up. It has decidedly last-gen graphics and from what we saw, mediocre gameplay too. We think we'll stick to our gym trainer to bring us back in shape for now.

Finally, Ubisoft pulled a rabbit out of the hat since no one had a clue about a new Rainbow Six game. The Rainbow Six: Siege (as it is called) demo showed a done-and-dusted hostage mission. While the destruction physics looked really good and the tactical gameplay was typical Rainbow Six, the textures looked blocky up close. All said and done, we are still super excited for the game.

Ubisoft is riding high on the success of Watch Dogs and we think the strong show with a variety of games at this year's E3 will only bolster their dominant position in the future.